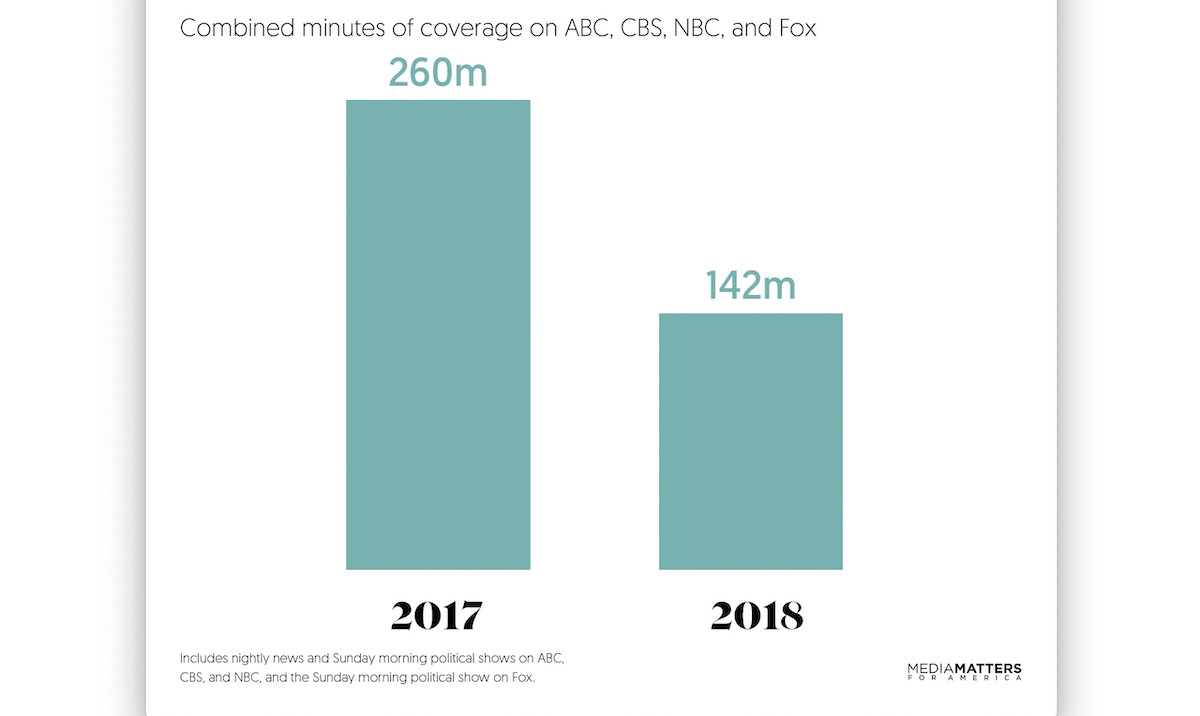 Broadcast news coverage of climate change dropped a remarkable 45 percent last year despite growing evidence for, and alarm about, the existential threat it poses, according to a new study.

Climate coverage on nightly news programs and Sunday morning political shows on the major U.S. networks dropped from 260 minutes in 2017 to a mere 142 minutes in 2018, Media Matters reported Monday. And nearly one-third of all 2018 coverage (a full 46 minutes) came at year’s end, in a December 30 episode of NBC’s Meet The Press which was devoted to climate change.

This overall collapse in coverage came despite the fact 2018 was one of the biggest years for alarming climate reports and deadly warming-worsened disasters.

And yet the networks continued to underreport the growing scientific evidence that climate change is worsening extreme weather. As Media Matters notes, “none of the networks’ news reports on the major hurricanes of 2018 even mentioned climate change.”

Coverage was down sharply for ABC, CBS, and Fox. The only reason it wasn’t also down for NBC was the 46 minutes they spent in their end-of-year Meet The Press climate episode.

The networks aired a total of nine climate segments that included footage of Trump denying climate science, but, as Media Matters reports, only two of them actually “rebutted his comments by noting the scientific consensus around climate change.”

Equally worrisome was the lack of 2018 coverage of either solutions or responses to the problem. Fox News Sunday failed to mention solutions or responses in any of its five climate segments. And of the 75 climate segments that aired on ABC, CBS, and NBC in 2018, just 15 of them — one in five, or 20 percent — mentioned solutions. And four of those segments came in the December 30 episode of NBC’s Meet The Press.

We know from social science research that talking about solutions in addition to the problem more successfully engages the audience. When the media reports only about the threat of climate change or political inaction, that can drive public frustration and disengagement. But when the media focuses on the solution to the problem, it can “help build more positive public engagement,” as one 2015 study reported.

Clearly, 2019 is going to be a very different story when it comes to broadcast TV stories. We’ve already seen much more media coverage of the climate crisis — and a much greater focus on climate solutions.

For that we can partly thank Rep. Alexandria Ocasio-Cortez (D-NY) and the activism of young people who have brought to the national forefront the issue of climate change and all of its solutions in the form of the Green New Deal. Without that activism, the mainstream media would no doubt continue underreporting on the greatest preventable threat to our nation.