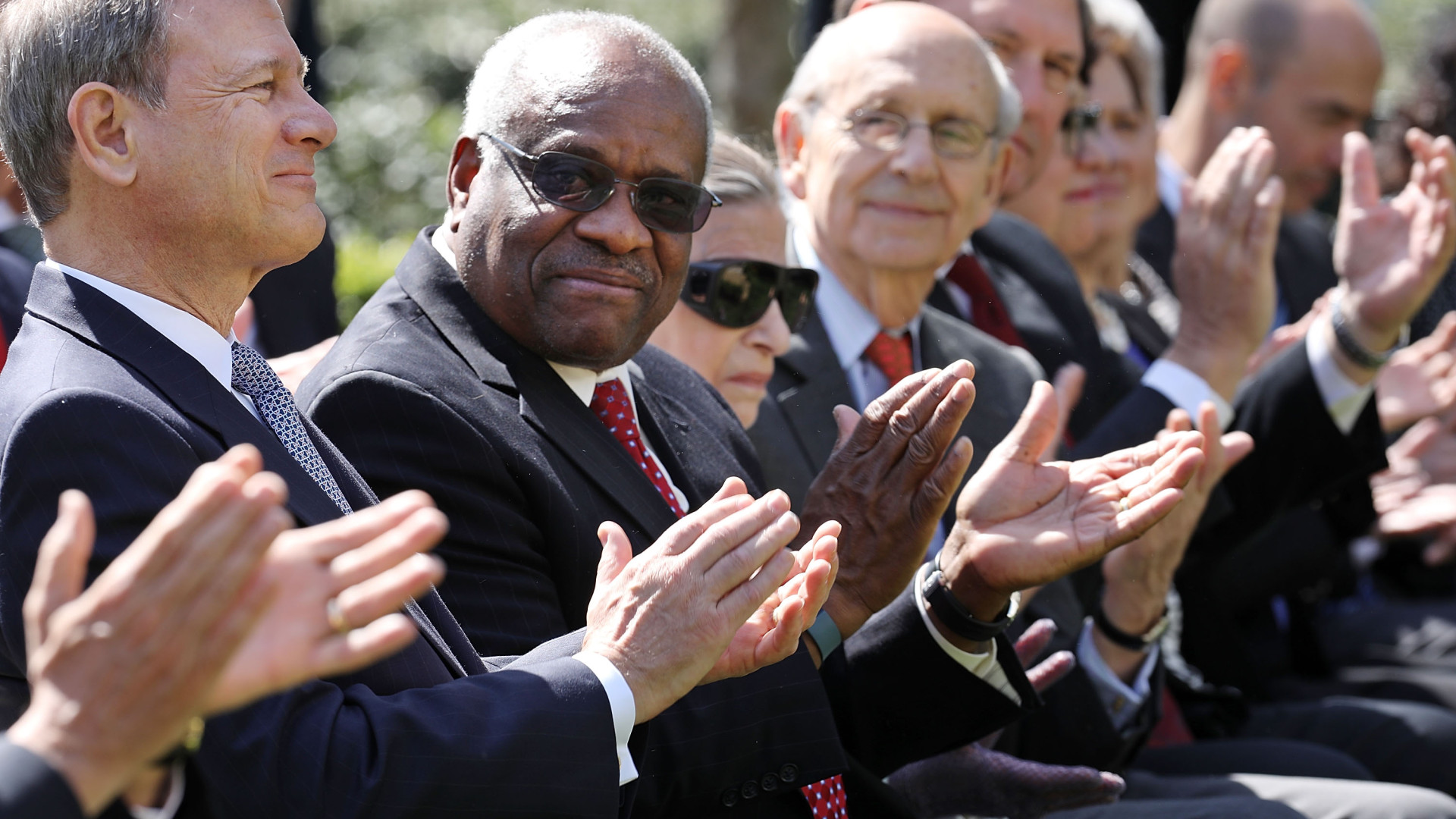 To be sure, the commonwealth goes through the motions of permitting its citizens to cast ballots and then counting those ballots every two years. But Virginia’s gerrymandered maps preordain Republican control of the state house. In 2013, Republicans won a 67-33 supermajority in the House of Delegates, despite the fact that Democrats swept Virginia’s statewide races in the very same election. After the 2017 elections, the GOP majority shrunk to 51-49 — but that’s after Democrats won the statewide popular vote by more than nine points.

Last January, a federal court ordered enough of the state house maps redrawn to give Democrats a very good shot of gaining a majority in the 2019 elections. The fate of this court’s decision that Virginia’s legislatively drawn maps constituted an illegal racial gerrymander is now before the Supreme Court — which will hear oral arguments next Monday.

Ordinarily, the Roberts Court is where voting rights go to die. Just last term, in Abbott v. Perez, the Supreme Court effectively held that white Republicans enjoy such an extraordinarily strong presumption of racial innocence that it is virtually impossible for voting rights plaintiffs to prevail when they accuse lawmakers of drawing district lines with racist intent. And that was before Justice Anthony Kennedy allowed President Donald Trump to choose his successor.

But Bethune-Hill appears to be a unicorn. It involves a racial gerrymander so egregious — or, more importantly, so perfectly tailored to upset someone who shares many of the Republican justices’ worldviews — that there is a very real chance that this Supreme Court will strike it down.

One reason why Democrats can be optimistic about this case is that Bethune-Hill is on its second trip up to the Supreme Court — and the state’s gerrymandered maps didn’t exactly receive a warm welcome the first time around. Prior to the case’s first appearance before the Supreme Court, a lower court upheld all 12 challenged districts at issue in this case. The Supreme Court’s first Bethune-Hill upheld only one of these determinations, and sent the challenges to the other 11 districts back down to the lower court for future review.

Then, last June, the lower court determined that these 11 districts are, in fact, the products of racial gerrymandering and must be struck down.

The 12 challenged districts were drawn in 2011, after the 2010 Census but before the Supreme Court struck down much of the Voting Rights Act in 2013. To comply with the fully operational Voting Rights Act, the state’s new legislative maps could not show “retrogression” — meaning that they diminish the number of districts in which racial minorities can “elect their preferred candidates of choice.”

But the state’s mapmakers used an unusually ham-handed method to prevent retrogression. Rather than examining each of the 12 districts individually and determining how to tailor the design of each of these districts to prevent retrogression, the map drawers largely consulted with just one African-American member of the state house. Based on this consultation, they determined that her district must have a black voting-age population of at least 55 percent. This 55 percent figure “‘was then applied across the board to all twelve’ districts,” according to the Supreme Court’s first Bethune-Hill decision.

That’s exactly the sort of policymaking that’s unlikely to fly in a Supreme Court dominated by Republicans who view even the most benign forms of race-conscious laws as akin to Jim Crow segregation.

Under the first Bethune-Hill decision, courts must treat a legislative district as preemptively unconstitutional when a voting rights plaintiff demonstrates “that race was the predominant factor motivating the legislature’s decision to place a significant number of voters within or without a particular district.” And there’s very little question that race was the predominant factor driving how Virginia drew its challenged districts.

The state not only applied the 55 percent threshold to the challenged districts, but it also often went to great lengths to separate black and white votes. As one expert testified at trial, for example, the state even divided a military base into separate districts because doing so would sort many black voters into a different district than white voters. In several cases, district lines were drawn “precisely at the point where black neighborhoods transitioned to white neighborhoods.”

Once a plaintiff proves that race predominated the line-drawing process, existing doctrine still allows the state to prevail. But, at the very least, the state must show that its use of race to draw district lines was narrowly tailored to ensure compliance with (now deactivated) provisions of the Voting Rights Act. That will be an very heavy lift for the gerrymandered map’s defenders, in light of the fact that the state applied a 55 percent threshold across each of the challenged districts, rather than conducting an individualized assessment of each district.

As the lower court determined in its opinion striking down the 11 districts, “the legislature’s application of a single, ‘mechanically numerical’ 55% BVAP requirement to all 12 challenged districts strongly suggests that the legislature did not engage in narrow tailoring.”

Two other factors are also worth noting. The first is that, in the first Bethune-Hill decision, two of the Supreme Court’s most conservative members argued that the majority opinion was too kind to Virginia. In a partial dissent, Justice Clarence Thomas argues that the state’s mere decision to draw 12 districts as majority-black is enough to trigger the highest level of constitutional scrutiny. Meanwhile, in his own separate opinion, Justice Samuel Alito seemed to agree with Thomas — Alito favorably quoted a 2006 opinion by the late Justice Antonin Scalia, which argued that “when a legislature intentionally creates a majority-minority district, race is necessarily its predominant motivation and strict scrutiny is therefore triggered.”

It’s also not entirely clear that the Supreme Court has jurisdiction to hear this appeal in the first place. The state’s Democratic attorney general chose not to appeal the lower court decision striking down the 11 districts, so the appeal was filed by the GOP-controlled House of Delegates. But it is unlikely that the house is allowed to file such an appeal.

As a general rule, no party is allowed to appeal a lower court order unless they are somehow injured by that order. But it is far from clear that the House of Delegates as an institution is injured by a decision requiring some of its districts to be redrawn. Individual members of the house are injured if they are more likely to lose their next election as a result of such a decision, but the House of Delegates itself remains intact.

Virginia Republicans, in other words, appear to have stumbled into one of the few gerrymandering scenarios that may actually run into trouble in this Supreme Court.

They should not shed any tears, however, The gerrymandered maps became law in 2011. The Bethune-Hill litigation was first filed in 2014. It’s now 2019. Even in the best case scenario for Democrats, Republicans still got to run four elections under the racially gerrymandered maps. If the Supreme Court ultimately strikes down these maps, the state will run just one election before the maps are drawn anew for the next redistricting cycle.

So, while Bethune-Hill may end in defeat for this one racial gerrymander, it is unlikely to do much to deter future gerrymanders. Why quit gerrymandering when there are so few consequences if you are caught?