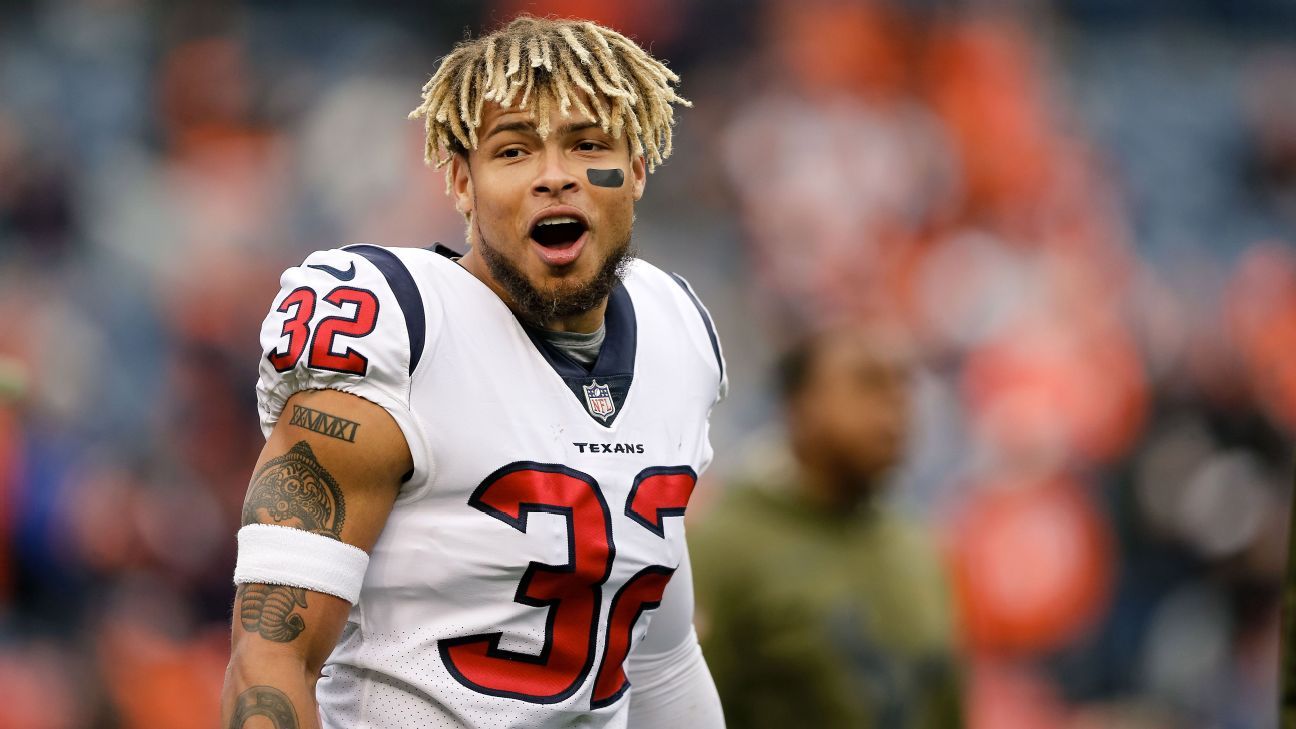 As of Monday, NFL teams are legally allowed to start talking with the agents for prospective free-agent players — that is, players whose contracts expire at 4 p.m. ET Wednesday when the new league year begins.

The next couple of days are where the first wave of free agency really happens, and by 4 p.m. ET Wednesday, we’ll likely have a sense of where most of the big names are headed.

So, before it all gets started, I felt I’d share with you a little bit of what I’m hearing about how the week might play out:

Jump to:
Under-the-radar positions | Trade rumblings
Thrifty playoff teams | Don’t be surprised if …
Quick hitters | What about the QBs?

Don’t be surprised if …

Sources familiar with the Raiders’ thinking say they would like to use their salary-cap space on offensive players and find defensive solutions in a defense-heavy draft in which they hold four of the top 35 picks. Bell’s market has been a bit tough to figure out. I’ve heard the Jets, Ravens and Texans listed as interested teams, but no one seems to know who’s going to pay Bell $12-13 million a year or more. Jon Gruden and the Vegas-bound Raiders obviously aren’t afraid to be aggressive.

Maybe one like the four-year, $30 million deal Jerick McKinnon got from the 49ers last year. There are teams looking for running backs who are telling people they’re more interested in Coleman at his price than Bell at his. Look out for the Jets, Ravens and Texans if they don’t get Le’Veon, and don’t completely rule out the 49ers, who don’t owe McKinnon another guaranteed penny.

… Tyrell Williams gets a lot more than you expect

The wide receiver market is a bit thin (except for one specific part of it we’ll get to later), and there’s a list of teams interested in finding out what the 6-foot-4 Williams would look like as their No. 1 wideout. Teams looking for receivers include the Colts, Jets, Browns and Bills, who happen to be the top four teams in terms of projected available cap space, as well as the Titans, 49ers, Cardinals, Lions, Eagles and Patriots. Williams is going to have a huge market.

… Earl Thomas ends up in the AFC West

The Chargers’ release of Jahleel Addae caught my attention, as I’d been told to watch out for them as a surprise potential Thomas destination. They had some interest in Eric Weddle before he signed with the Rams, and while Thomas will cost a lot more than Weddle did, the Chargers could view him as the player that puts their stacked roster over the top. Of course, the Chiefs, who edged out the Chargers for the AFC West title in 2018, have a need at the position as well and were among the teams interested in trading for Thomas last fall.

The safety market is flooded, but Thomas is in a class by himself and could become the league’s highest-paid player at the position this week.

Tyrell Williams, as we mentioned earlier, should benefit from the dearth of outside receivers in this market. But I’m hearing numbers in the $9-$10 million-a-year range for slot guys like Adam Humphries, Jamison Crowder and Cole Beasley, all of whom could move on from their former teams for big deals elsewhere.

C.J. Mosley and Anthony Barr are big names whose teams didn’t franchise them because the linebacker franchise number ($15.443 million) was too big. The number is inflated because pass-rushing 3-4 outside linebackers are lumped together with linebackers like Mosley and Barr, who don’t rush the passer. Neither Mosley nor Barr can expect to make $15 million per year on a new deal, but it’s not crazy to think they could each get Luke Kuechly-level $12-million-a-year deals if enough teams are interested.

Another place the Rams will look different is on the offensive line, where center John Sullivan is a free agent and so is left guard Rodger Saffold. The latter is almost surely gone from L.A. and is the top guard on a relatively thin market. Two veteran guards — Kevin Zeitler and Kelechi Osemele — have been traded in the past few days. More teams are looking.

Not sure if you noticed, but the Patriots didn’t franchise anyone, including kicker Stephen Gostkowski. Many expect them to re-sign him, but would another team (Bears?) swoop in and give Gostkowski a top-of-the-market deal based on his career accomplishments? And if so, do we have to wonder what the Patriots know? They’ve had only two different kickers since 1996. If they’re making a change at the position, there must be a good reason.

Two recent deals that will affect the market

It’s reportedly for $13 million per year (though we haven’t seen the full details yet, possibly because the Eagles are waiting until the new league year to officially execute it for accounting purposes), and several teams at the combine were disappointed with the Eagles for paying that high a price for a soon-to-be-31-year-old pass-rusher. The deal allowed the Eagles to trade Michael Bennett to the Patriots, and it likely drives up the price for free-agent pass-rushers such as Dante Fowler Jr. and Za’Darius Smith. Graham has the same agent as Justin Houston, a similar-age pass-rusher who was cut by the Chiefs on Sunday and is free to sign with any team immediately.

Again, we have yet to see the full details, but ESPN’s Adam Schefter is reporting Brown will earn $19.8 million per year in new money on the contract the Raiders will give him once his trade from Pittsburgh to Oakland becomes official. Obviously, Tyrell Williams can’t hope for a number like that, but it doesn’t make life easier for the Falcons, Saints and Chiefs, who are working on extensions for Julio Jones, Michael Thomas and Tyreek Hill, respectively. The first $20 million-a-year wide receiver contract could arrive this summer.

The Cowboys are so focused on extensions for Dak Prescott, DeMarcus Lawrence, Amari Cooper, Byron Jones and (eventually) Ezekiel Elliott that they aren’t expected to be major players in free agency. Some people have connected them with Earl Thomas for a long time, but his price is likely going to be too high for the Cowboys, who might wait out this deep safety market and find a bargain.

If the Bears lose safety Adrian Amos and slot corner Bryce Callahan, they’ll have to fill those spots. But Chicago’s big offseason was last year, and the Bears like the roster they have. Watch out to see what they do at running back, where Jordan Howard could be cut and Adrian Peterson could be a free-agent target to replace him.

Like the Cowboys, Seattle is focused internally. Starting guards J.R. Sweezy and D.J. Fluker are both free agents, and if they leave the Hawks will have to find some other guys with initials instead of first names to play guard. Linebacker K.J. Wright (what’s with the initials?) is another free agent they’d like to keep, and they are preparing for extension talks with defensive end Frank Clark, linebacker Bobby Wagner, defensive tackle Jarran Reed and the big one: quarterback Russell Wilson.

Two trade rumors that aren’t about to go away

At last check, the Giants still had no active trade talks involving their star wide receiver. And I still seriously doubt ownership signs off on a trade that would leave the Giants with $16 million in dead money on their cap and having paid Beckham $21.5 million in cash for 12 games. But there are teams (specifically the 49ers and Browns) still hoping to talk the Giants out of Beckham, and there are still people around the league who believe such a move isn’t impossible for the right (exorbitant) price. This isn’t an Antonio Brown situation, where the team feels it has to dump a guy for whatever it can get.

It’s hard to imagine the Buccaneers’ defense without McCoy, but the Bucs really could use the $13 million in cap savings they’d get by trading him. Watch Tampa Bay’s other moves in the coming days (cut or trade DeSean Jackson, for example?) and see whether they end up needing the cap room and getting what they need to get in exchange for a well-liked star.

What about the backup QBs?

Unless the Nick Foles deal totally collapses in Jacksonville or Miami signs him to be a starter, Bridgewater’s best play might end up being a return to New Orleans for another season as Drew Brees‘ backup.

Expected to be cut by the Dolphins, Tannehill could surface as Sam Darnold‘s backup with the Jets, where new coach Adam Gase has always been a fan.

The obvious fits are Baltimore and Carolina, where the starters are mobile, and the offenses are somewhat designed around that, which is one of Taylor’s strengths.