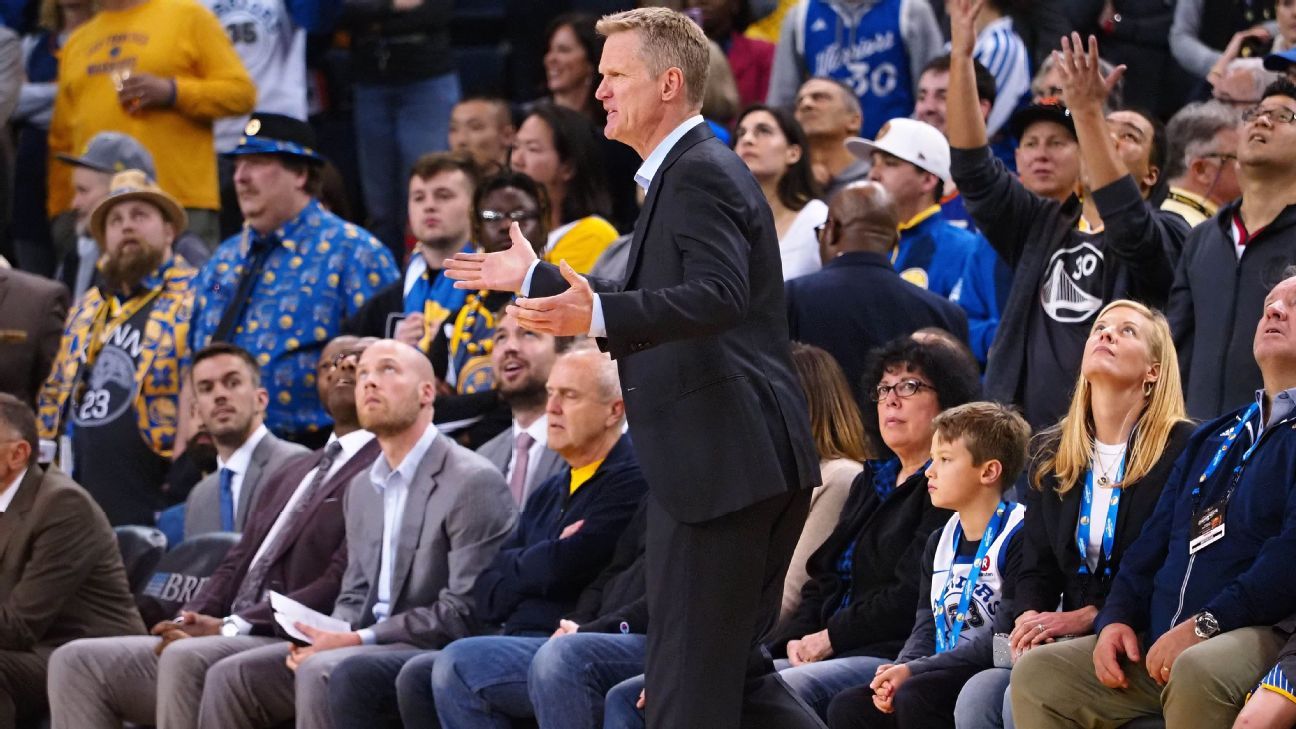 After Tuesday’s practice, Kerr tried to diffuse the situation.

“No, the lip-readers were wrong,” Kerr said with the hint of a smile. “What I said was I beg to differ with Draymond’s approach tonight. Those were my exact words. I don’t know how somebody misconstrued that.”

Kerr would not reveal if he had discussed the clip with Green, saying that the matter was “private.”

The clip went viral soon after Sunday’s game, after Kerr had already made his postgame remarks. A few minutes after his news conference, Kerr came back into the locker room looking for Green, who already had left without talking to reporters. Kerr declined to address the episode to a small group of reporters late Sunday night, preferring to address the larger group on Monday afternoon.

When asked how Green’s state of mind was, Kerr also noted that matter was “private.”

“It’s 2019,” Kerr said. “George Orwell was right, he just had the year wrong. He wrote ‘1984,’ the title should have been 2012 or so. Modern life. Everything’s recorded, everything is filmed. I decided I’m going to get a giant laminated board with all my playcalls and I’m going to turn into an NFL coach from here on out. … It’s a different world. So you got to figure out how to survive and thrive in the modern way of life. One way of doing it is not really concerning yourself with stuff that doesn’t matter.”

Kerr did acknowledge that the Warriors are disappointed with their inconsistency. Last Tuesday, the Warriors lost by 33 at home to the Boston Celtics, the worst home loss in the Kerr era. They followed that up by beating the Denver Nuggets on Friday and then losing to the Suns on Sunday.

On top of the viral video, in the aftermath of Sunday’s loss, All-Star swingman Klay Thompson said he was disappointed in the energy from fans inside Oracle Arena. The Warriors, who will move to Chase Center in San Francisco in September, are now 24-10 this season at Oracle.

“I think I understood what he was talking about,” Kerr said. “But it’s all tied together. When you play well, when you play with a great energy and a great pace and spirit, the fans are going to be naturally more excited. And on the flip side, the fans were probably more excited five years ago than they are now because the journey was fresh and new and it’s different now. It’s different for everybody. … I do know one thing — that we really thrive on the energy at Oracle. I think the fans have helped us win at a high level and we need them, but we got to give them more to cheer about for sure.”

Kerr also addressed comments made by Kevin Durant in frustration after leaving Sunday’s game late in the fourth quarter because of a right ankle injury.

“Stupid ass m—–f—ing game we playing,” Durant said, according to KNBR. “We need to be playing championship-level basketball.”

“I think all of our players and coaches know we got to be more consistent,” Kerr said. “But again, modern life — if you don’t think those things, those words have been uttered by every team in the history of basketball, you’re mistaken. It’s just that everything’s on camera and lip-read. Even when it’s the wrong interpretation.”

As for Durant’s ankle, Kerr said the star forward is “day-to-day.” The Warriors open up a four-game road trip Wednesday night against the Houston Rockets.

“Kevin is OK,” Kerr said. “Day-to-day is what [Warriors director of sports medicine Dr. Rick Celebrini] is telling me, so he’s in the training room right now, getting some work done.”

The Warriors come into Wednesday’s game having gone 4-6 in the past 10 games, but Kerr still doesn’t appear outwardly concerned. He believes his team will find its stride soon.

“I think this year actually reminds me a lot of last year,” Kerr said. “I think it’s similar. If you look historically at any team trying to win multiple titles in a row, get to the Finals year after year, there’s a different vibe. And as you go the journey gets harder and there’s more adversity, and we saw it at the end of last year quite a bit. We were able to pull things together and win the title. And we’re seeing plenty of adversity this year.

“I tell the players every year, there’s a reason you pour champagne on each other when it’s all said and done because it is hard. It is a difficult thing that we’re trying to accomplish. And it gets more difficult as you go, just based on circumstances. So we’ve got our work cut out for us, but we’re still confident because of our track record, because of the banners that we’ve hung, we’re very confident that we can do this again. But it’s not easy.”