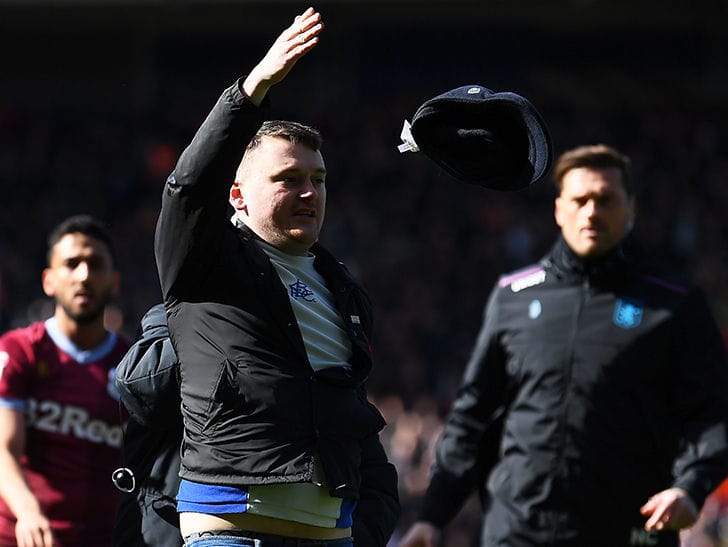 The opposite of punch-drunk must’ve been what this English pro soccer player was feeling after getting attacked by a rival fan … ’cause he sure looked clear-headed when he scored the game-winning goal some 45 minutes later.

Aston Villa’s star midfielder, Jack Grealish, was bum-rushed Sunday by a Birmingham City fan who rushed the field in the early part of the first half and sucker punched him in the dome. The guy got a running start to the hit and knocked Grealish down in the process.

There were shocking scenes at Birmingham v. Aston Villa today as a pitch invader ran on and punched Aston Villa’s Jack Grealish. pic.twitter.com/aIYHcNKJfK

The Birmingham fan was quickly subdued and yanked off the field by security. He was later arrested and hauled off to jail, according to local authorities.

Funny enough, Grealish went on to score the game-winning goal against Birmingham City in the second half of the game, clinching the W for his squad in a 1-0 victory. The goal itself was pretty sweet too … a left-footed shot to the bottom corner.

Jack Grealish revenge goal with bonus someone getting hauled away by police pic.twitter.com/Q9j99l9xcv

Birmingham definitely were not sore losers either — in fact, the team issued a statement after the game apologizing to Grealish and Aston Villa at large for what one of their own fans did … saying the dude would be banned from St. Andrew’s Stadium for life.

Ya know that guy’s sitting in a jail cell somewhere knockin’ himself for this one. Talk about poetic justice, eh?