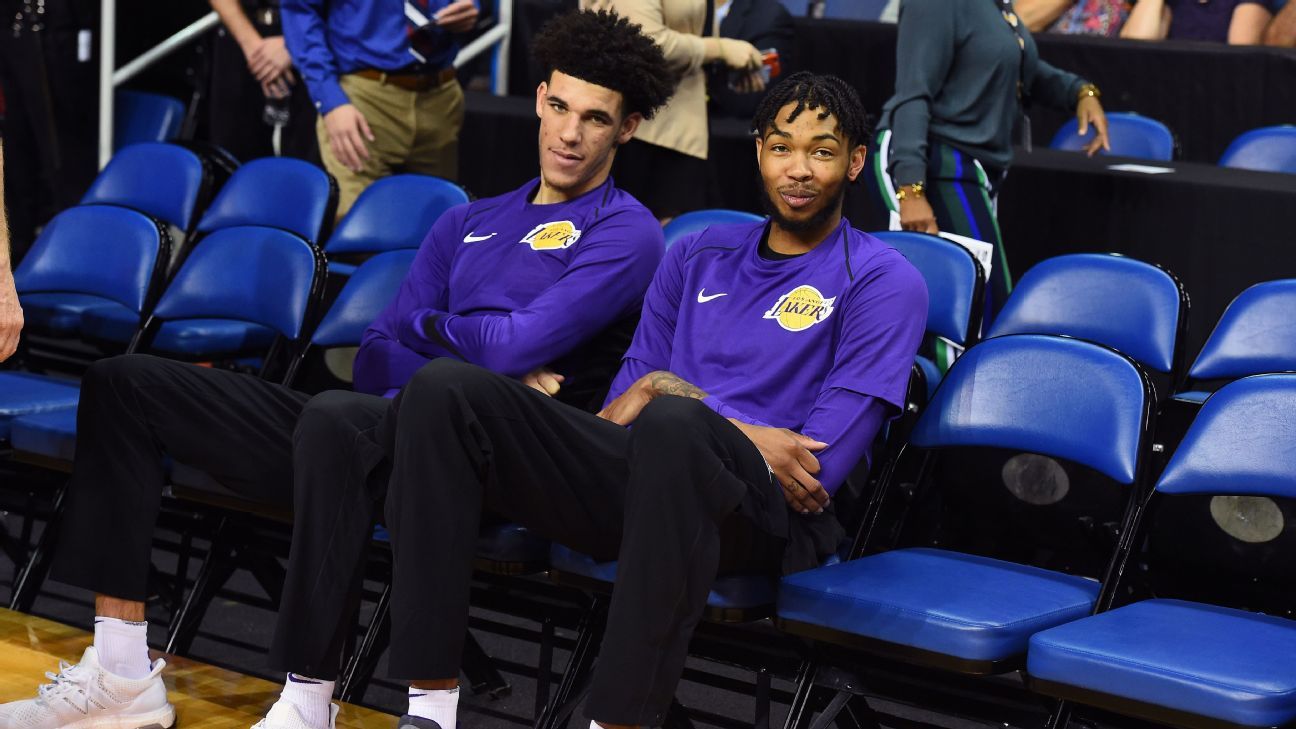 LOS ANGELES — Brandon Ingram and Lonzo Ball both will miss the remainder of the Los Angeles Lakers‘ fading season.

Ingram has been diagnosed with deep venous thrombosis in his ailing right arm and head coach Luke Walton was tight-lipped Saturday on any further details, other than to say the third-year forward is out for the season.

Hours after the Lakers revealed Ingram’s condition in the morning, a source confirmed that Ball has been shut down for the remainder of the season as he continues to make his way back from a grade 3 ankle sprain and bone bruise.

Ingram had missed the past two games with a sore right shoulder after Walton said the forward had difficulty raising his shoulder without pain.

Further tests revealed deep venous thrombosis, a condition caused by a blood clot, frequently accompanied by swelling and pain in a limb. The condition usually occurs in legs, but can occur in the upper body.

Ingram was playing the best basketball of his three-year career prior to his injury. Ingram averaged a career-best 18.3 points and 5.1 rebounds per game this season but has thrived since the All-Star break. He averaged 27.8 points and 57 percent shooting in his six games after the All-Star break, according to ESPN Stats & Information research.

According to Second Spectrum data, Ingram averaged 1.15 points per direct iso since the Anthony Davis trade demand that put his future on the Lakers into question on Jan. 28, tied for third-most behind Kawhi Leonard and Zach LaVine in the NBA over that span.

Walton would not go into any further detail about Ingram’s condition.

“We’ve released what he’s got going on, but I’m not going to get into all the details,” Walton said. “I’m just finding out a lot of it myself. All I’m going to say on him right now is that he’s out for the rest of the season.”

Prominent athletes such as Chris Bosh and Serena Williams have been affected by blood clots in recent years. Bosh had to retire due to blood clotting issues.

Ball had recently been seen doing some shooting without jumping and dribbling exercises on the court. He suffered the grade 3 sprain at Houston on Jan. 19 and then had a bone bruise that slowed his recovery.

“From my eye not being a doctor, he’s not quite ready,” Walton said before Ball was shut down.

With the Lakers’ season fading away as they fall further out of playoff contention, the organization will play it safe with their young prospects. Kyle Kuzma also missed his second consecutive game Saturday after rolling his ankle last week.

The Lakers went 15-8 when LeBron James, Ingram and Ball all played this season. However, the team is just 15-27 when at least one did not play, according to ESPN Stats & Information data. The trio has not been on the court together since Christmas Day.

The Lakers (30-35) have had an extremely frustrating season, entering Saturday night’s game against the Boston Celtics in 10th place in the Western Conference.

They trailed San Antonio by 6½ games for the final playoff spot, meaning James likely will miss the postseason for the first time since 2005.

The Athletic first reported Ball was shut down after the latest medical evaluation Saturday.