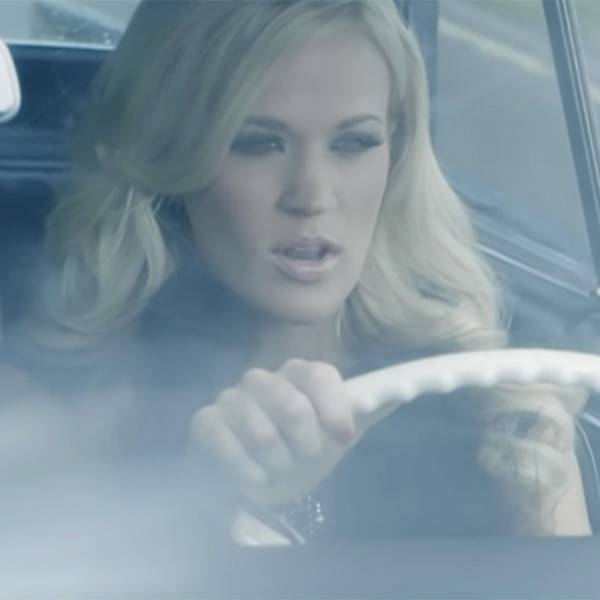 We are continually blown away by Carrie Underwood’s voice, song catalog, live performances and of course, her music videos.

As we get ready to get into somethin’ bad this weekend in honor of Underwood turning 36 years old today, we’ve rounded up her best music videos of all time to look back at and sing along to.

We know you don’t need an excuse to blast “Jesus, Take the Wheel,” “Before He Cheats” or “Love Wins,” but we’re giving you one…so take it!

The mother of two has a lot to celebrate this year welcoming her second son, Jacob, in January and heading into the Cry Pretty Tour, beginning on May 1. Over the years Underwood has proven that she is a force to be reckoned with and her videos back that up.

Whether its running over an ex-lover in “Two Cadillacs” or pulling at our heartstrings in “Cry Pretty,” the birthday girl has range…and we’re not just talking about her vocals.

When it comes to her videos she is able to take on different personas in a heartbeat to sell the story of the lyrics and the video’s theme and that’s why we love her even more.

Not every artist is creating music videos these days, but the blonde beauty has released two new videos in relation to her latest record and we are so grateful that she did. That doesn’t mean however that they can beat her oldies like “All-American Girl” or “Blown Away.”

So, pop the champagne in honor of the birthday babe and make sure to watch all of her most amazing music videos below and then cast your vote for which one is the best of them all.

Pro tip: don’t piss off Underwood! “Before He Cheats” shows the singer’s destructive and revengeful side and we are obsessed with it. After finding out her boyfriend cheated on her, the singer grabs a bat, goes to his car and breaks all of the windows before keying it and carving her name into the seats. She is pissed and she means business.

If you haven’t heard “Jesus, Take the Wheel” you need to listen to it ASAP and then watch this touching video for it. As Underwood sings, you see a young mother trying to stop her baby from crying as she realizes that being a mother isn’t exactly easy. You then see an old man caring for his wife, who is sick and slipping away from him. Both of these individuals need help, and they’re not alone. A fighting couple can’t seem to save their marriage by themselves, because sometimes things are outside your control. In the end they all get back to happiness by having a little faith.

This intense video is everything we love from Underwood. It is in black and white, shows the artist belting out the strong lyrics and features other strong women looking fierce as they take back their lives after their men cheat on them. There is fire, lions, snakes slithering through men’s shirts and scared looking cheaters as well, which is so intense.

What happens when Underwood teams up with Miranda Lambert? Somethin’ bad! This video is definitely more like a movie with its storyline and it’s one of our favorites. To start, both Underwood and Lambert work at a bank. Then we see that they are also high-stakes poker players and robbers. They pull off a massive heist, go all in at poker and look hot as they get into some serious trouble before getting out of town together.

“See You Again” pulls at our heartstrings for all the right reasons. The whole video shows moments of people falling in love, spending time with their loved ones, being reunited with those people and then saying goodbye, but not forever. There are military surprises, funerals, proposals and all of life’s big events that make you feel love and miss love at the same time. It’s beautiful.

Underwood’s most recent video embodies the message of love winning above all else through its powerful visuals. The clip starts we distraught individuals walking along a gloomy bridge that has broken down cars and dirty paths throughout until together the push through the bad and end up in a colorful, pretty field, which is where the singer joins them. Then, there is a concert, colorful powder flying everywhere and people smiling as they celebrate the good in life.

After hearing her parents screaming at one another, a little girl escapes into her imagination and to another world. She is the hero of her own fantasy, which is full of magical woods, mystery and make believe. This video is like a mini movie with a little girl at the center of turmoil and heartbreak at the hands of her parents and only her fantasy world can save her.

Underwood takes us on a back-road journey in this video as she drives an old truck through the desert. Along the way we see the lives of different women, and one man, who just need a break. One is a single mom who runs a diner, another works at the auto body shop and Underwood is the musician that plays at their local watering hole…and allows them to take the much needed break as they listen to her sing.

In another one of Underwood’s more dramatic videos, “Two Black Cadillacs” tells the story of two women who were wronged by the same man and therefore brought together to take him down. After being cheated on by the same man, two black Cadillacs show up to the man’s funeral, and two women wearing two black veils step out, but they don’t cry. As the story continues you see they had met before and they decided to hurt the man who hurt them…together.

“All-American Girl” is like watching Underwood as a Barbie doll with all of her potential professions…or like her dressing up on Halloween. The adorable singer is seen as a football player, nurse, flight attendant, cop, artist, cowgirl, and waitress as well as a cheerleader, bride, and Miss All-American. She is so darn cute as each and every one of these characters and as you watch you can’t help but smile.

“Cry Pretty” is an emotionally charged song and the video definitely matches that. In between clips of Underwood singing there are glimpses into the life of a musician who is sad, down on herself and just needs to cry to get through it. She might have a glamorous life, but even rock stars can’t cry pretty!

“Something in the Water”

If you love water and love dancing then this music video is the one for you. Throughout this powerful video, we see the Oklahoma native singing in the middle of a giant pool of water. As she sings dancers perform a routine behind her in the water and it’s magical.

Ready to cry? Well, even if you’re not, this video is a must-see. It takes you through the sad journey of Underwood and her love as he heads off to war. You see her in a wedding dress excited about the future and then she transforms into a widow at the cemetery mourning her husband before their lives together even really began. It’s a tear-jerker, but such a good video.

As one of her most iconic songs, “Blown Away” obviously had to have an equally as memorable video. What happens you ask? Well, Underwood plays the daughter to an abusive father, who is a drunk. When a twister hits their house, instead of waking him up from the couch (although she does try), she saves herself and their house is blown away…with her father inside it.

Cheers to you and your incredible voice, videos and fierce legs. We are forever envious of how good you look in a pair of shorts!