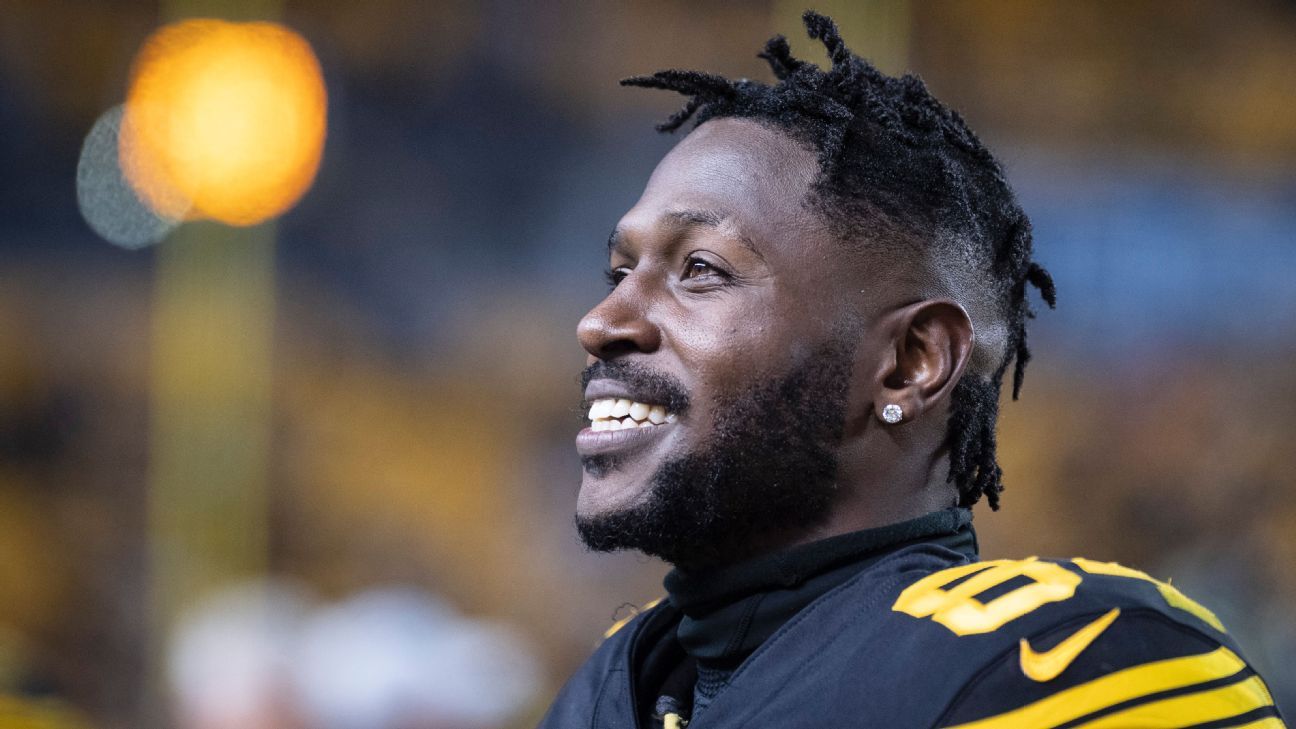 The Pittsburgh Steelers have agreed to trade their prolific but disgruntled wide receiver to the Oakland Raiders in exchange for a third- and fifth-round pick, a source told ESPN’s Adam Schefter.

Brown will receive a new three-year deal worth up to $54.125 million from the Raiders, with $30.125 million guaranteed, the source said. He previously had three years and $38.9 million left on his contract with the Steelers, with none of the money guaranteed.

Agent Drew Rosenhaus said in an appearance on ESPN’s SportsCenter on Sunday morning that the Raiders were “a great fit” for his client.

“Jon Gruden, I believe, is a future Hall of Fame coach and one of the great offensive minds in football and the Raiders have a fantastic franchise quarterback in Derek Carr, they have a great tradition, great fan base, moving to Las Vegas,” he said.

“This is just a great fit for Antonio. He wanted a fresh start and certainly got an opportunity to go to a renowned franchise, one of the marquee franchises in the NFL, a historical team. I’m sure Al Davis would be very proud of this transaction.”

Rosenhaus was asked what went wrong in Pittsburgh to sever the nine-season relationship between Brown and the Steelers.

“Well, obviously things fell apart at the end of the season,” he said. “Antonio wanted to play in the last game against the Bengals, it didn’t work out that way, there were a lot of things said that, really it was just a divorce. Antonio had nine great years. Sometimes in life, whether it’s sports or business, you have a great relationship, but things happen and you have to move on.”

Rosenhaus added that “there’s absolutely no hard feelings [with the Steelers] and we spoke with the team last night once the trade was agreed to and wished them the best.”

Trades are not official until the new league year begins Wednesday.

This will be the first NFL trade for new Raiders general manager Mike Mayock.

The addition of Brown provides an explosive deep threat for Carr that Gruden and the rebuilding Raiders desperately need.

The Raiders, who have had one winning season and one playoff appearance since the 2002 campaign, had the 18th-ranked passing game in the NFL last season, averaging 234.4 yards, and their 19 receiving touchdowns were tied for 24th. Jordy Nelson led Oakland receivers with 63 receptions for 739 yards and three TDs.

Gruden raved about Brown before the Steelers visited Oakland in December. Brown was limited to a season-low 35 receiving yards on five catches by cornerback Gareon Conley in the Raiders’ 24-21 victory.

“He can run every route you dream up,” Gruden said of Brown at the time. “I say that about other receivers, but he can run double moves, he can run by you, he can run crossing routes, he’s very good after the catch. What’s the greatest thing about this man? I’ve told all our receivers, if you get a chance to watch him practice, you’ll see what unlocks the greatness in him.

“He’s the hardest-working man, I think, in football. Hardest-working player I’ve ever seen practice. I’ve seen Jerry Rice, I’ve seen a lot of good ones, but I put Antonio Brown at the top. If there are any young wideouts out there, I’d go watch him practice. You figure out yourself why he’s such a good player.”

Carr and Brown have previously spoken highly of each other.

Brown lauded Carr at the Pro Bowl in January 2018, when both players represented the AFC.

“He’s special, man,” Brown said of Carr at the time. “It’s been an honor catching the ball from him. He’s a great young quarterback, young champion, and [has] all the fundamentals to be one of the greatest.”

On Saturday night, Brown tweeted a video of the two from last year’s Pro Bowl, along with the caption, “Love at first sight.”

Carr responded to Brown’s tweet, “Brother let’s get to work!”

One year ago, the Steelers were built around the Killer B’s. Now Brown is going to be a Raider, running back Le’Veon Bell is going to be a free agent and quarterback Ben Roethlisberger is the last Killer B standing in Pittsburgh.

By trading Brown, the Steelers will be forced to swallow $21.12 million in dead money against their salary cap. It’s thought to be the largest dead-money charge in NFL history.

Jeremy Fowler says the Raiders always wanted Antonio Brown in their offense and they “were the last team standing.”

Brown recorded Hall of Fame-type production in Pittsburgh with 837 receptions, 11,207 yards and 74 touchdown catches in nine years, including an NFL-record six consecutive 100-catch seasons. But a frayed relationship between the player and team overshadowed the gaudy numbers, and a divorce became inevitable.

When the Steelers began entertaining a trade in January, they believed Brown’s market would be strong, with one NFL general manager saying the Steelers would eye a first-round pick in any deal.

The market was strong enough that the team could deal Brown, who will turn 31 in July, before free agency started. The Steelers marked Friday as an artificial deadline for a trade after several teams — including the Raiders, Washington Redskins and Tennessee Titans, according to Schefter’s reporting — showed interest during the NFL scouting combine.

Without Brown, JuJu Smith-Schuster will be Pittsburgh’s No. 1 receiver and the focal point of the offense in 2019. He recorded a team-high 111 catches and earned his first Pro Bowl bid last season. The depth chart behind him, however, isn’t so clear-cut.

James Washington, a second-round pick in 2018, has obvious talent, but he struggled to find a rhythm as a rookie — though he did encourage with a pair of 60-plus-yard performances late in the year. Slot receiver Ryan Switzer, who made an impact with 36 catches for 253 yards in his first season in Pittsburgh, is the only other core veteran wideout under contract. Three reserves — Darrius Heyward-Bey, Justin Hunter and Eli Rogers — are unrestricted free agents.

The Steelers are among the league’s most successful teams at identifying wide receiver talent in the draft, and they could select a Day 2 wideout for the third consecutive year to help replace Brown. They also can expand the passing game duties of tight end Vance McDonald and running backs James Conner and Jaylen Samuels.

The Raiders are coming off a 4-12 campaign, and they don’t officially have a home for next season. An Oakland Coliseum executive said last week that while a prospective agreement to keep them at the Coliseum is “95 percent” done, nothing is certain.

The Silver and Black will move to Las Vegas in 2020, provided the new stadium there is complete.

ESPN’s Jeremy Fowler and Paul Gutierrez contributed to this report.