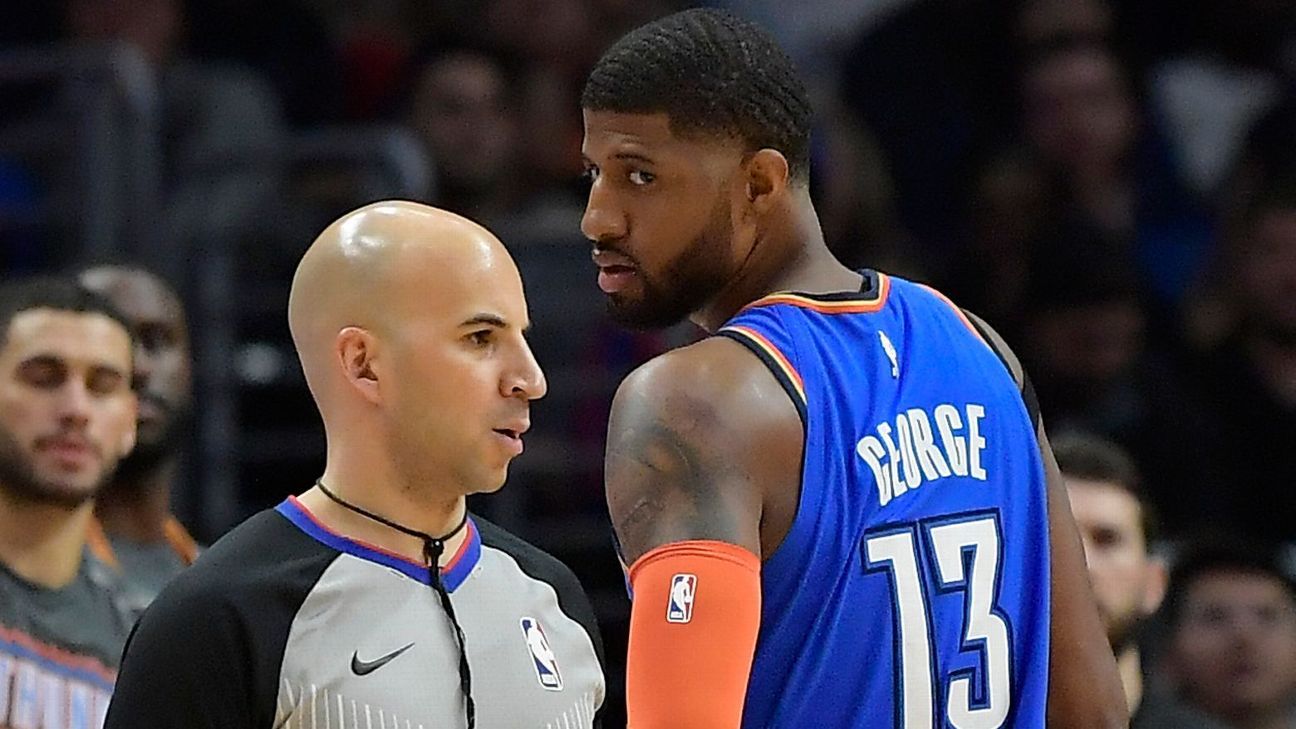 LOS ANGELES — After Oklahoma City’s Paul George, Russell Westbrook and Steven Adams fouled out in the final four minutes of a 118-110 loss to the LA Clippers, George ripped the officiating in the NBA and said something must be done.

“It’s just bad officiating,” George said. “I’m sorry, just bad officiating. We don’t get a fair whistle. We haven’t gotten a fair whistle all year. … Somebody’s got to look into this. It’s getting out of hand, where we somehow just walk teams to the line. And there’s nobody that gets more contact. If I don’t speak for myself, I speak for Russ. There’s nobody that gets more contact than Russ going to the basket. And it’s just crazy.

“I don’t understand it. It’s piece of s— being on that floor. We giving everything we got. We’re playing hard. We’re getting grabbed, we’re getting scratched, clawed, held, shoved. And there’s nothing for it. The officials just get to walk out, and there’s nothing that penalizes them for not officiating the game the right way.”

Friday’s game marked just the second time in the past 10 seasons that a team had three starters foul out in regulation, according to ESPN Stats and Info. The other time was Feb. 12, 2014, when three Wizards players fouled out.

George had to watch the last 3:49 from the bench after he was whistled for an offensive foul on Patrick Beverley, who celebrated with a scream before jawing with George and the Thunder bench. Then with the Clippers up by three, Westbrook was called for a charge on a drive and fouled out with 54.2 seconds left as the Clippers held on for their fourth-consecutive win. Adams collected his sixth foul with 9.2 seconds left.

The Clippers went to the line 46 times compared with the Thunder’s 26 trips to the stripe. The night before, Oklahoma City watched Portland go to the free-throw line 47 times, 15 more foul shots than the Thunder got in a 129-121 overtime win at Portland.

George said he hasn’t seen a game in which two All-Star teammates fouled out in a non-overtime game. George and Westbrook were All-Star teammates this season. According to Elias Sports Bureau, Friday’s game actually marked the third time over the past 20 seasons in which two teammates who were named All-Stars that season both fouled out in a game that ended in regulation. The other two were the Suns’ Shawn Marion and Amar’e Stoudemire in 2007 and the Lakers’ Shaquille O’Neal and Kobe Bryant in 1999.

“It’s nothing we can do,” said George, who was held to 15 points and six rebounds. “I’m going to lose money on this. We speak up, we lose money. There’s nothing I can do to change that. It is what it is. There’s gotta be a change, but there’s nothing that I can do.”

Thunder head coach Billy Donovan said his team has to curb its fouling, particularly unnecessary fouls far from the basket. The Clippers’ Danilo Gallinari (34 points) and Lou Williams (40 points) each went to the foul line 15 times.

“Too much fouling,” Donovan said when asked about the Thunder’s past two opponents going to the line a combined 93 times. “Our guys are playing hard and competing, but like there is no reason for Lou Williams to get to the free throw line 20 times. We’ve got to know that. And like our guys are playing really hard and are really competing but we are fouling too much away from the ball when we don’t have to.”

Westbrook said the way some players are playing the game these days leads to a lot of whistles.

“To play without fouling is tough sometimes,” said Westbrook, who had 32 points, eight rebounds and seven assists. “A lot of those guys like play to get fouled. That is how the game is nowadays. It’s not really basketball, you’re just playing to get fouled to see what happens.”

George said he isn’t the only one who feels this way about the current officiating in the NBA.

“I come out here and I do my job, and that’s to play and be a professional,” George said. “I don’t know if it’s Adam Silver that’s got to [look into] this. We expect the officiating to be professional as well.