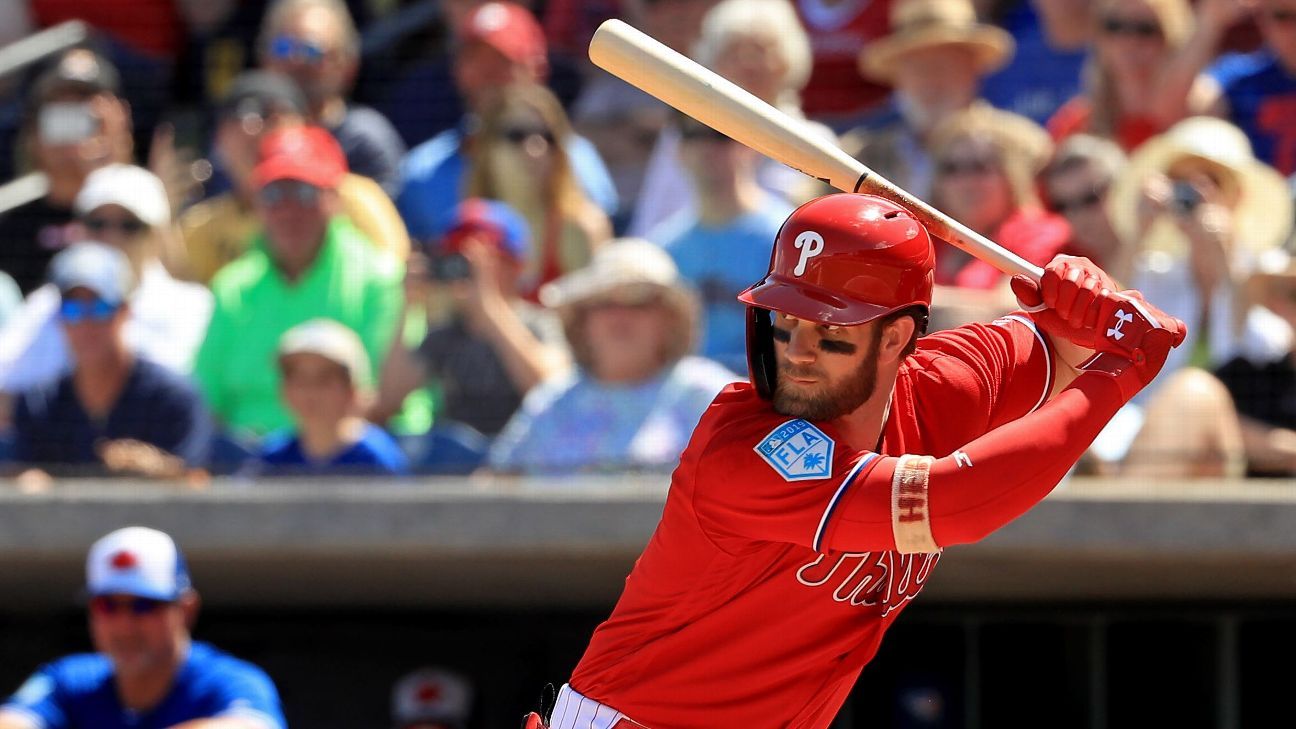 CLEARWATER, Fla. — Bryce Harper drew big cheers, a pair of walks and an unusual defense Saturday in his spring training debut for the Philadelphia Phillies.

Both times the slugger with the biggest contract in baseball came to the plate, the Toronto Blue Jays shifted to a four-man outfield, moved the shortstop on the other side of second base and gave the left-handed-hitting Harper a wide-open left side of the infield.

“I’ve never seen that. That’s intense,” Harper said, adding he hopes teams don’t do that to him often. “If they start playing ball like that, it’s definitely different.”

“Hit a lot of homers, drive the ball like you’re capable of, do exactly what you always do, be Bryce Harper,” said Kapler, who is known for using many shifts.

The Cubs, Astros and even the Rockies have employed a four-man outfield, but it was quite strange in an exhibition game.

No surprise, however, was the loud ovation fans gave Harper when he walked up to the plate to Will Smith’s theme song from “The Fresh Prince of Bel-Air.”

Wearing No. 3 on his uniform, eye black under his eyes and a white armband with “HEART” written in red letters around it, Harper dug into the batter’s box as “In West Philadelphia born and raised …” blared from the stadium’s speakers.

“The ovation they gave me, I’m very humbled, very blessed to be able to get out there and play in front of a fan base like that,” Harper said, adding he’ll probably use a different walk-up song once the season starts. “Selling out a spring training game is pretty incredible to see. Just goes to show how great a fan base Philly is.”

Batting third as the designated hitter, Harper didn’t go deep but jogged around the bases after Rhys Hoskins blasted a two-run homer off Jays right-hander Matt Shoemaker on the first pitch after the first walk in the first.

“Rhys is a special player,” Harper said. “Nice to see him jump on the first pitch and go deep. Having Rhys hit behind me, I’m very excited about it.”

Harper took a mighty swing and missed on the first pitch he saw, and fouled off the first pitch he faced in the third. He looked at eight balls outside the strike zone, including a few close ones. Although he is known for hitting home runs, Harper also is a patient hitter who knows how to work the count. He has a .388 career on-base percentage and had a career-best 130 walks last season.

“It was fun to be out there, get some dirt on my cleats, get in the batter’s box and compete. That’s what I love to do,” Harper said. “I was able to see some pitches, take two swings early in the count, see some splits from a good pitcher, really happy where I was today.”

“That’s who Bryce Harper is,” the second-year manager said. “He took some strong cuts and the balls he was taking, he was comfortable taking them. It certainly didn’t look like his timing or rhythm was off. Looked like Bryce Harper as we saw him in a Nationals uniform last year, and he looks much better in a Phillies uniform.”

Phillies fans have embraced the superstar since his arrival.

Fanatics said Harper’s No. 3 Phillies jersey was the all-time best-seller for any athlete during the first 24 hours of launch. The team store quickly ran out of letters and didn’t have any more R’s for adult jerseys in the first week. More than 340,000 tickets were sold within a week.

The 26-year-old Harper played his first seven seasons in Washington. He joked about the red Phillies pinstripes making him look slimmer.

“When you put Phillies across your chest, it means something to these people,” Harper said. “I’m excited about that. I’m very excited to be part of something bigger than myself.”

NFL Hall of Famer Brian Dawkins, a Philadelphia Eagles legend, gave the Phillies an inspirational speech in the clubhouse before the game and got the fans even more fired up when he welcomed the team onto the field.

Dawkins might be the most beloved athlete in Philly sports history. If Harper helps the Phillies win a few World Series championships, he could challenge for that title.

“It’s been great being around the guys, being able to get into a clubhouse where everybody cares and really appreciates everything everybody does,” Harper said, perhaps taking a shot at the Nationals. “You can say that about the whole organization. People have been working here 20-25 years. It goes to show how much of a family it is here and how important people are to this organization.”