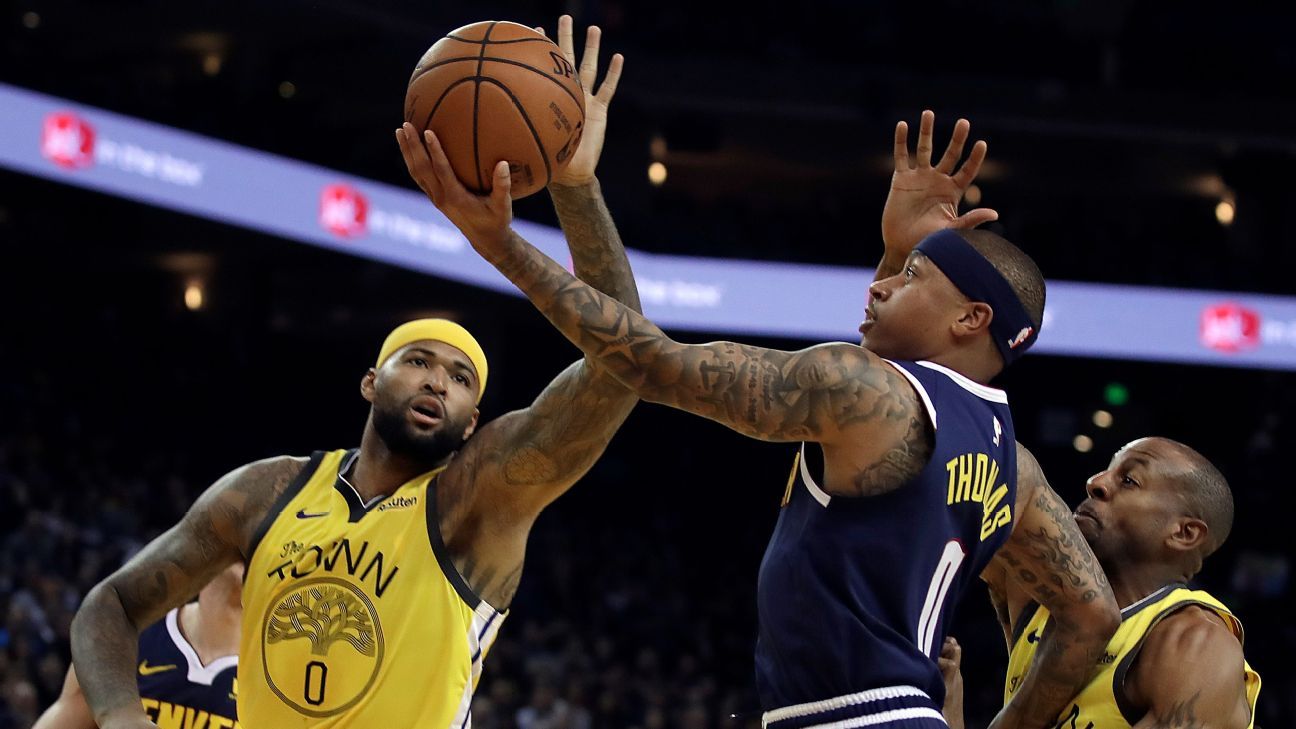 Cousins has been a frequent target of media and fan criticism in recent weeks, as the Warriors came into Friday’s showdown at Oracle Arena having lost five of their past eight games. But Cousins played arguably the best all-around game of his brief Warriors tenure against Denver, posting 13 points, 6 rebounds, 6 assists, 6 blocks and 3 steals in 28 minutes.

“Everybody wants to talk s— about DeMarcus’ defense,” Draymond Green said, “I told y’all last game, we haven’t played with energy — or at practice. Everybody wanna [say], ‘It’s a problem when DeMarcus is out there.’ Yet everyone picked the energy up, all of a sudden no one is talking about DeMarcus’ problems defensively. Now it’s a good matchup for him. That’s bulls— to me.”

Green noted that the Warriors played with much better energy than they did in a 33-point loss to the Boston Celtics on Tuesday. He said he believed Cousins had taken way too much personal criticism for the Warriors’ woes.

“I think it pissed him off,” Green said. “He’s a competitor. He’s one of those guys that’s been misunderstood his whole career because he competes and he wears his emotions on his sleeve. And saying that, like I said before, our entire team played better defense. Everyone wants to single one guy out, but yet our entire team defense was horrible the last two weeks. And so everybody picked that up tonight, and obviously he shined on that end as well, but everyone picked it up.”

Cousins, who has been professional and cordial with the media since joining the Warriors, declined to address reporters after Friday’s game.

“And so all of a sudden it’s not just trying to pick one guy out the bunch and say, ‘Oh, this is the reason they’re struggling.’ No, we all were the reason we’re struggling, and now that we all picked it up, we saw some things that he’s capable of tonight,” Green said. “Which I’ve seen even throughout our struggles. He gets his hands on a lot of balls. He comes up with some blocks. He’s been really good at times, but because the team was struggling everybody wants to pick the one guy out.

“Obviously he’s the guy that hasn’t been here. So it’s easy to say, ‘The Warriors have always been good defensively, well, DeMarcus is there, so let’s pick on him.’ The fact of the matter is, we’ve been middle of the pack defensively the whole year. So it was good for everybody to pick it up on that side of the ball and then for him to have the defensive performance that he had.”

Cousins, who made his return to the lineup on Jan. 18 after missing almost a year because of a left Achilles injury, has been repeatedly targeted on defense by opposing teams looking for an edge against the Warriors. Cousins hung tough throughout Friday’s game, limiting Nuggets star Nikola Jokic to five field goals.

“It was a great matchup for him tonight,” Warriors sharpshooter Klay Thompson said. “I know he was motivated going up against Jokic, who’s in the MVP conversation. So DeMarcus was up for this game, and we’re going to need that from him down the stretch. He’s such a load on both sides of the ball, especially defensively, he’s got such amazing hands for how big he is. You saw it tonight. Six blocked shots, three steals — that’s incredible for a big fella like that to do that. And he just weighs on you too, so there’s no easy buckets when you’re going against him, because he’s so physically dominant.”

Aside from his defense, Cousins’ 3-pointer with 6:20 left in the fourth quarter gave the Warriors a boost and a light-hearted moment when the proud big man lifted both arms to the sky in exasperated relief after knocking down the shot. Cousins is 14-for-57 from beyond the arc this season.

“I thought DeMarcus was great,” Warriors coach Steve Kerr said. “Six blocks, three steals. He was all over the place defensively. And then he finally got that 3 to go down and put his hands to the heavens. He’s been great, his approach, his attitude.”

Now the Warriors have to hope Cousins can maintain the momentum he created for himself and his team over the final month of the regular season and beyond. Warriors star Kevin Durant said he doesn’t think the criticism Cousins endured had an impact on the way he played against the Nuggets.

“I don’t think you guys really know what defense means,” Durant said. “You look at the numbers and the stats and the blocks, and it’s easy for you to say, ‘Oh, DeMarcus had a great game.’ If somebody else tell you he didn’t play well, then that’s what you’ll write. But I don’t think anybody in our locker room is really blaming DeMarcus for anything. We all have our miscommunications out there, miscues out there, whatever you want to call it, but I don’t think you guys had anything to do with tonight.”