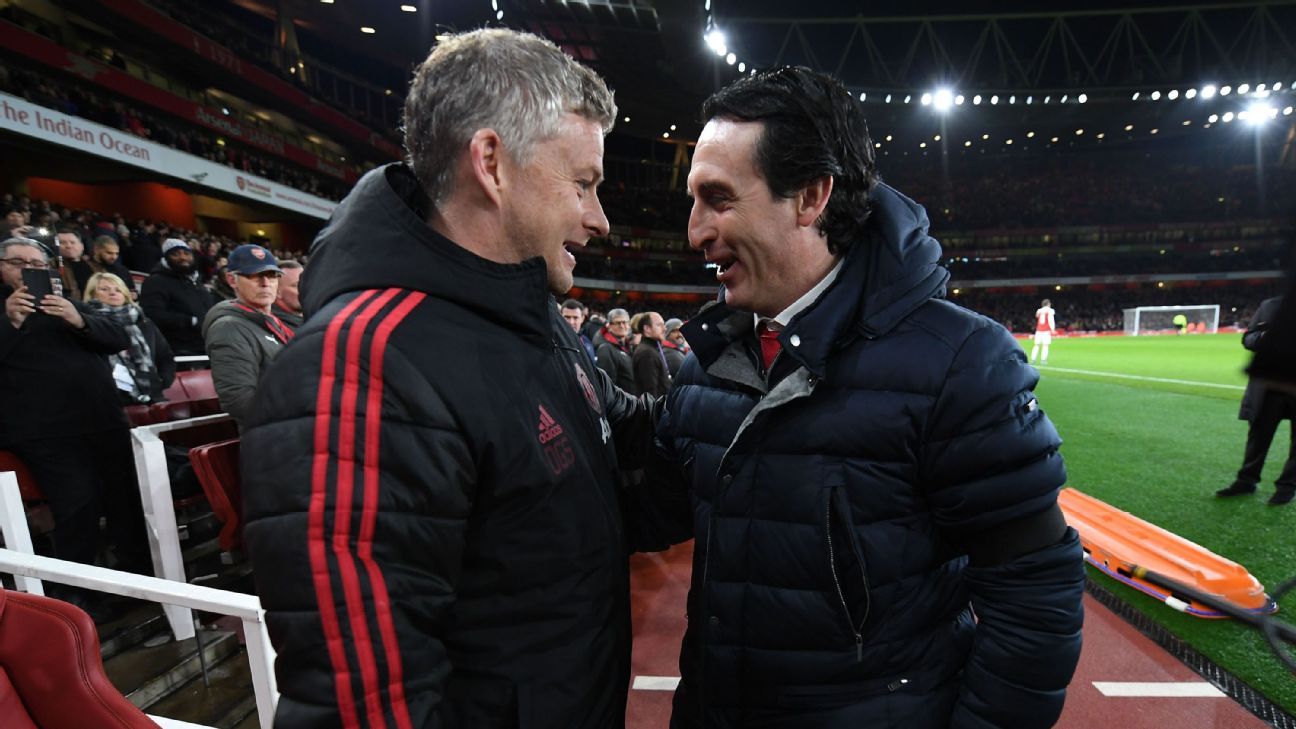 Arsenal and Manchester United are both dealing with European hangovers of a different nature. Arsenal will have a day fewer to prepare after a 3-1 loss to Rennes in the Europa League, but it’s the Manchester United players who will probably be more exhausted ahead of their game on Sunday. After Wednesday night’s miracle/VAR-assisted win in Paris, the energy must be drained from the bodies and minds of the United players. The remarkable effort required to defeat PSG will ultimately be worth it, but there are short-term consequences: specifically, how well they will recover for their next test, a trip to face Arsenal, particularly given the number of injuries they will still have to cope with.

The Gunners themselves have their own problems, after their capitulation to Rennes on Thursday. The excuse that they lost with 10 men doesn’t cut much mustard, since that was entirely self-inflicted through Sokratis Papastathopoulos‘s brainless red card. But as much as a numerical disadvantage, it was Arsenal’s tendency to indulge in slapstick defending that cost them in France, the sort of thing that really won’t fly against Marcus Rashford and Romelu Lukaku.

These are two teams in transition, but transitions that very clearly would be helped by a place in the Champions League next season. United and Arsenal — separated by a single point in the table — are the favourites for that final top-four spot, and while this game isn’t exactly a playoff for it, three points would represent a significant advantage.

Two teams, two different European hangovers — who will deal with theirs the best?

Last Sunday, Jurgen Klopp was surprisingly touchy after it was suggested his substitutions in the 0-0 Merseyside derby draw were not positive enough, which along with the fact he had earlier also managed to get into an argument with a ballboy, could be interpreted as a sign that the pressure is getting to him. However, while you can understand his point about the substitutions, it was notable that he called upon Adam Lallana rather than Xherdan Shaqiri when his team needed a creative boost.

Shaqiri has perhaps not shown the form of earlier in the season, but then again, he hasn’t been able to: He hasn’t started a game since the end of January, and in that time, he has come off the bench only twice. So will the failure to find a way through against Everton and the assorted struggles of some other forwards mean Klopp will recall Shaqiri when Liverpool face Burnley on Sunday?

What a curious few weeks it has been for Tottenham. Two stupendous wins over Borussia Dortmund have sandwiched three disappointing results in the Premier League, with two defeats and a draw snuffing out any loose hope they had of challenging for the title. It’s right that their priority now must be the Champions League, but making sure they’re actually in it next season can’t be far behind that.

They have a four-point cushion over Arsenal in fifth, while Chelsea lurk a further point behind them. From outsiders for the top prize, Spurs are now in danger of slipping out of the top four. The good news is that everything’s in their hands, their game this weekend is potentially their last until March 31, which will afford their thin squad some sort of rest, and that game is theoretically straightforward. Southampton beat Arsenal at home earlier in the season, but they have struggled since, and sit a precarious two points outside the bottom three. Either way, Spurs must win to set their domestic season back on track.

How crucial will Sean Longstaff turn out to be for Newcastle?

Depending on how you view things, you could either think it a good or bad thing that Sean Longstaff has become such a key player for Newcastle so quickly, despite virtually emerging from nowhere at the turn of the year. The midfielder has been a central part of an encouraging spell for Rafa Benitez’s side, in which they’ve nudged themselves away from dire trouble, but he will be central no more this season after sustaining a knee ligament injury against West Ham.

With Longstaff out of the side for the remainder of the campaign, it’s someone else’s job to spark the side, a spark which will be very much required against Everton on Saturday, as Newcastle could still easily get sucked into a relegation scrap. Benitez will hope Longstaff is merely extremely important rather than indispensable.

What impact can Scott Parker have at Fulham?

Scott Parker barely had any time to make a significant impact on his Fulham side before the game against Chelsea last weekend, but it was still the Cottagers’ best performance in some time. So now he has been in charge for over a week, how different will his version of Fulham be to Claudio Ranieri’s when they face Leicester on Saturday?

Simplicity seems to be the name of the game, Parker adopting such maverick concepts as putting players in their preferred positions and in a straightforward formation, which sounds like it has been a welcome palette-cleanser after Ranieri’s often confusing selections. “He’s just given us a clear idea,” said Tom Cairney, when asked what was different. “I think he took the shackles off a bit.”

Will this clarity be enough to save Fulham from relegation? Probably not, but it could be enough to get Parker the job permanently.