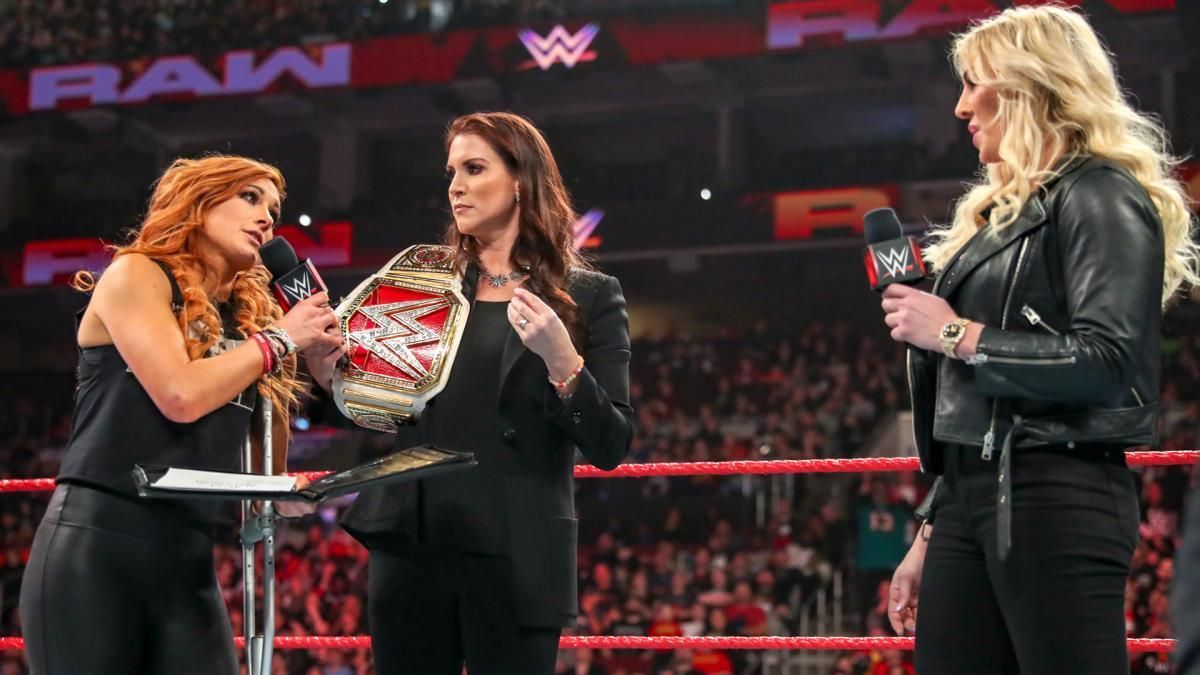 Fastlane has become an annual Catch-22 for the WWE. You don’t want to show your hand too early on certain plot twists or give away too much of what fans will see at WrestleMania. On the other side of that balance, WWE wants fans tuning into the last pay-per-view before WrestleMania and buying into all of the ongoing stories.

What that has tended to lead to in previous years is a match card that doesn’t come together until the last minute and some radical last-minute shifts that may or may not dramatically change the road to WrestleMania. This year’s edition is no different, and so we enter Sunday’s show presuming a few likely changes to the equation while still wondering how most of the WrestleMania 35 card will shake out.

Any story that has the Royal Rumble winner in a match to win back their chance at a WrestleMania title shot less than a month out from that show is going to leave some people scratching their heads. But here we are.

The last month has featured everything from Vince McMahon popping up and disrupting Lynch’s path to WrestleMania before disappearing without notice, arrests, several crutch attacks and, finally, Ronda Rousey dropping any façade and becoming the no-nonsense fighter she represented while at her UFC peak.

In the past, we’ve gotten some tremendous matches from the combination of Lynch and Flair, most notably at Evolution, and there’s no reason to believe it’ll be any different at Fastlane. The consistent playing up of Lynch’s knee injury might take away some of the fast-moving energy present in previous matches, but the history and the high level of physicality that’s sure to be in store should make up for it — at least in a narrative sense.

Any ending other than Lynch earning her way back into WrestleMania would be a genuinely shocking outcome. It’s easy to understand certain decisions designed to stretch out a story over a long period, but the time for dancing around the issue at hand is over. Lynch wins, whether or not Rousey shows up on Sunday or Monday, and it’s full steam ahead to a triple threat Raw women’s championship match at WrestleMania 35.

Prediction: Becky Lynch squeaks by with a victory in order to fulfill her destiny (again).

It was hard to know what to make of a suddenly friendlier, gentler Kevin Owens when he made his return to WWE a few weeks ago. On one hand, Owens was the tool of destruction by which Vince McMahon shoved Kofi Kingston to the side for the hundredth time in his 11-year WWE career. But even given a limited amount of time to build what should be a strong in-ring match, Owens embraced his unlikely everyman status with vigor to kick off SmackDown on Tuesday.

After vignettes in prior weeks showing Owens to be a terrible bowler and a father who enjoys taking his son to the movies, Owens aligned with the crowd not by cheaply appealing to a locality — he did it as a tool to bolster his insults towards Bryan. The circumstances behind this sudden return are a bit hard to follow, and no one knows whether or not to trust Owens’ change of heart yet, but in terms of a last-minute replacement, Owens represents a solid choice.

Bryan is squarely in his element when he can wax poetic and bloviate on a topic opposite another strong talker, and everything about their exchange spoke to each of their abilities. There’s history between Bryan and Owens, dating back to Bryan’s return to the ring around this time last year, but rather than further muddying the water in terms of the good guy/bad guy dynamic, this match is being treated as something new.

Whether or not Kingston factors into this particular match, if the path to WrestleMania doesn’t ultimately end up with Kingston challenging Bryan for the championship, something has gone seriously astray. That doesn’t bode well for Owens’ chances Sunday night, and who knows where he could go from here, but the main thing that will be on the minds of fans throughout this match is the prospect of #KofiMania.

Prediction: Daniel Bryan lies, cheats and/or steals his way to a victory

This match represents the third part to a triumvirate of matches that’s almost certain to lead in a specific direction heading into WrestleMania. After winning the SmackDown tag team championships, celebrating with The Miz’s dad and promptly losing those titles in their first official defense, Shane McMahon and The Miz get another shot at the gold on Sunday. In Cleveland. In front of The Miz’s dad, who will be ringside.

The entirety of the story of “the best tag team in the world” has been Miz and Shane’s desire for acknowledgement and pride from their fathers. Given the reaction Miz had after losing the belts, another loss and the embarrassment of failing in front of his dad is likely to send Miz off the deep end. The Usos have a deep pool of talent to draw from heading into WrestleMania, but the reigning SmackDown tag team champions will ultimately take a back seat after taking care of business and retaining their titles.

If this was 10 years ago, I’d look forward to a tag team match of Miz and his dad against Vince and Shane, but I’ll settle for Miz and Shane McMahon one-on-one at WrestleMania.

No matter how hard you have to suspend your disbelief to make this story make any real sense, there’s undeniably something special about what could be the final reunion of The Shield for the foreseeable future. It would take a dramatic development for Corbin, Lashley and McIntyre to spoil this feel-good story, but at the same time, such a result could theoretically go a long way towards defining unclear paths to WrestleMania for Roman Reigns and Dean Ambrose.

In reality, Reigns isn’t going to lose in his first match back.

Reigns has already diffused the possibility of getting involved with Seth Rollins, Brock Lesnar and the Universal championship at WrestleMania, and it would make sense to build Reigns up against a purely villainous opponent with whom he has a history. Reigns vs. Corbin might not jump off the page as a WrestleMania match, but there’s no reason to give fans the chance to feel anything but 100 percent behind Reigns and 100 percent against his opponent this soon after his return. As for Ambrose, who is set to depart from WWE after WrestleMania, your guess is as good as mine.

Fans got a serious scare on Monday night as social media posts from SmackDown’s live event in White Plains, NY showed a women’s championship match between Asuka and Mandy Rose cut short due to an apparent injury. Thankfully it appears that Asuka is OK after that scare, and she was well enough to blindside Rose and Sonya Deville Tuesday on SmackDown.

The path to a SmackDown women’s championship match at WrestleMania couldn’t be less clear, but if Rose walks out of Fastlane with title in her possession it would mark a truly disappointing run for Asuka. After winning the title in a triple threat TLC match in which Rousey essentially gifted her the victory, Asuka had what should have been a career-altering victory over Lynch at Royal Rumble. Then she disappeared from TV for weeks and lost a fluky match against Rose.

Few can say for sure which way Asuka’s road to WrestleMania will go, but she should do it with gold still strapped around her waist.

Bayley and Sasha Banks have declared their intentions to defend the WWE women’s tag team championships on Raw, SmackDown and NXT, but their first official defense will come at Fastlane against two other Raw superstars. Nia Jax essentially took herself out of the Elimination Chamber match, so this represents an opportunity to fix something for her team.

While the pursuit of two strong villains makes a lot of sense heading into WrestleMania, a loss at Fastlane cheapens the effect of a Bayley and Banks win at Elimination Chamber (as well as their proclamation that they’d defend the titles everywhere). Never underestimate the potential of a few hard to follow outcomes at Fastlane, but the team that should walk out with titles in hand is clear.

Ricochet and Aleister Black have won every match they’ve been involved since moving to Raw (and SmackDown), save for a DQ loss this past Monday when Roode and Gable got involved in the former’s tag team title shot against The Revival. So sets up this match, in which all six participants wore gold of some type during their time in NXT. The Revival feels like they have to win a match at some point during their time as Raw tag team champions, and this seems like the right opportunity for them to slow their somewhat confusing spiral of late.

What’s more, unlike Raw in recent weeks, Dash Wilder and Scott Dawson seem likely to get entrances on this show (or perhaps I’ve spoken to soon). Hopefully these three teams channel that NXT style of energy, chaos and passion in tag team wrestling that Raw and SmackDown have sorely missed in such matches over the last year-plus.

Prediction: The Revival get the pin on Gable or Roode.

The match with one of the deepest, longest-running narratives of any conflict on the Fastlane card drew the short stick of a kickoff show match this time around. Andrade and Rey Mysterio have gone one-on-one three times on SmackDown, with each match better than the one that preceded it. They also extended their rivalry in multi-way United States championship matches over the last two weeks, though each failed to win the title both times around.

With Mysterio leading the series 2-1, Andrade walking out of Fastlane with some positive momentum seems to make sense.

Prediction: Andrade and Rey Mysterio will make you regret it if you don’t show up to Quicken Loans Arena or tune into the WWE Network in time to watch this match.

There has been literally zero conflict between these two teams entering Sunday’s match on the Kickoff show. This will be Big E’s second and Xavier Woods’ first televised match since the Royal Rumble.

Prediction: The result will have zero impact on any storyline moving forward.