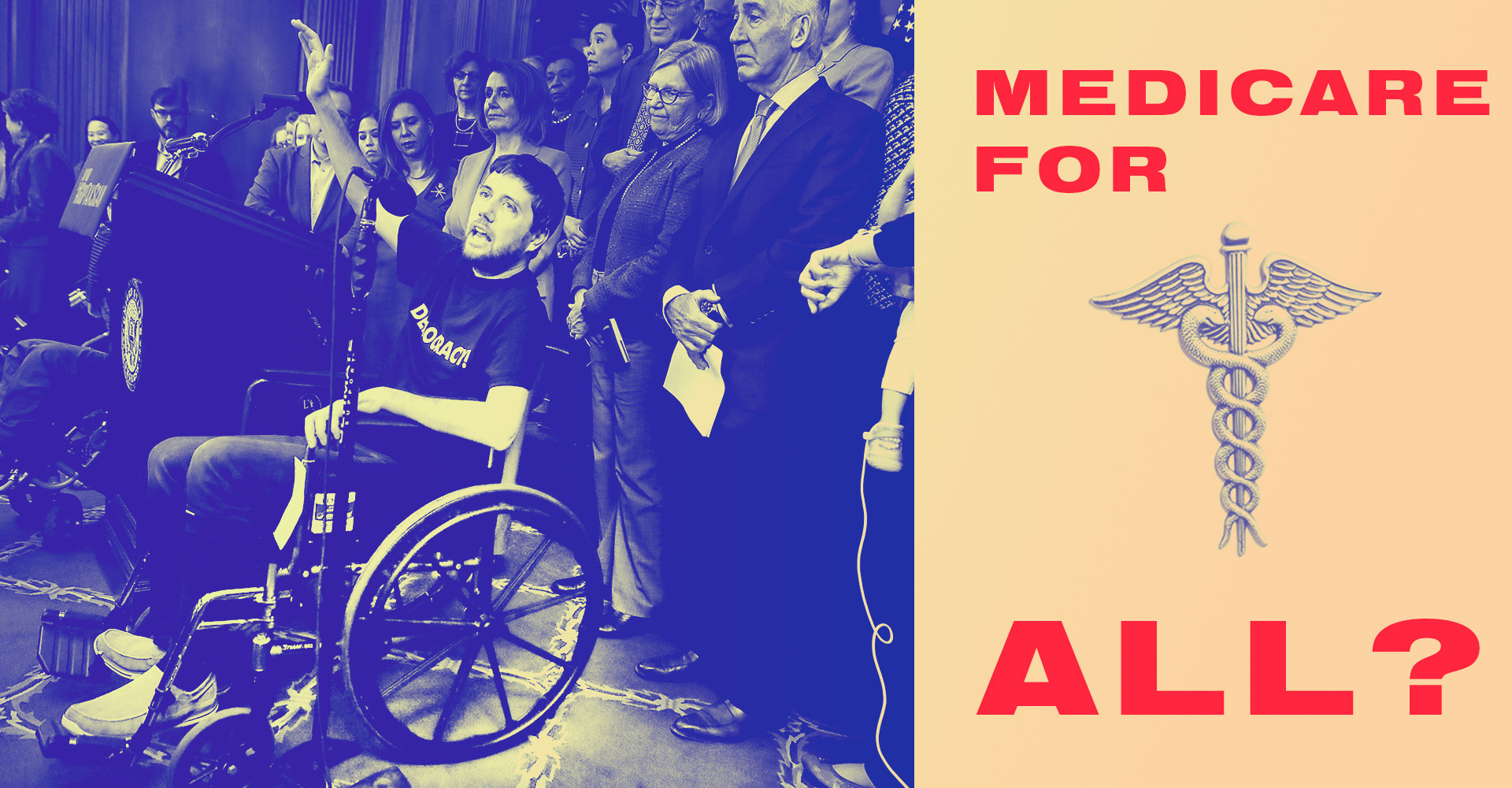 More and more, the progressive rallying cry, Medicare for All, is garnering support. It’s now a frontrunner topic for Democratic presidential candidates, and members of Congress are introducing legislation for how it could actually work.

But does Medicare for All really include everyone? Disability rights activists say not really, if you’re basing it on the way Medicare, the health program for seniors and certain people with disabilities, works today.

One in four U.S. adults are living with a disability, according to recent government data. Any health care plan aiming to cover everyone has to figure out how to include such a large and diverse community.

Disability rights advocates like Lilly have been meeting with members of Congress over the last year to ensure any Medicare for All proposal that Democrats champion actually addresses the needs of their community. Activists had a big role in defeating Republicans’ push to repeal the Affordable Care Act (ACA) in 2017, and now, they are demanding lawmakers keep them in mind when they decide to overhaul the health care system again.

“We sort of started coming into every space talking about universal health care and said, ‘Hey, don’t forget this long-term services and supports piece when you’re talking about health care because or else it’s not for all,’” said Nicole Jorwic, the director of rights policy at The Arc, who is also affiliated with the Consortium for Citizens with Disabilities.

So far, they’ve had some success.

While elated by these nods to the disability community, various advocates told ThinkProgress they are still closely monitoring the details — whether it’s the benefits package, the cost of prescription drugs, or what exactly the transition process to the new system looks like. The bills are far from primetime ready, and of course, none of the current legislation may even pass. But the unintended consequences of radically upending the country’s health care system — health care spending is nearly 20 percent of GDP — will be huge and, if done incorrectly, dangerous. That’s why it’s critical to start the conversations early.

“Health care is incredibly complicated and the details matter. The details are literally life and death for my community,” said Matthew Cortland, a disabled health care lawyer.

What health care currently looks like for people with disabilities

To understand what Medicare for All would mean for people with disabilities and what to watch out for, it’s important to understand how the current system serves this community.

“It’s not that you could get a book out of it, you could get like a 27 volume encyclopedia out of the answer,” said Cortland, when asked how the U.S. health care system treats people with disabilities.

In short, the system is failing the community much of the time.

The ACA said insurers cannot discriminate against people with pre-existing conditions, including disability. But the bigger problem with private insurance and Medicare is that the plans often don’t cover things people with disabilities need, like LTSS. Initially, Congress tried to include LTSS under the ACA, but later repealed this when Republicans regained control.

Medicaid, on the other hand, is the primary payer of, say, nursing homes and home health aide services. People with disabilities are disproportionately impacted by cost-sharing because they tend to use more medical care and services. Medicaid protects people from cost-sharing because, generally speaking, it’s a poverty program. But eligibility is tethered to income, meaning that, in order to qualify, people’s earnings cannot exceed a certain percentage of the federal poverty line.

“States have a lot of discretion and flexibility in setting… standards today and so there’s a lot of variation between states and there can be variations between disability populations within the states, both in terms of eligibility and benefits. Some states may say you have to have functional limitations in two areas versus one area,” said MaryBeth Musumeci, a disability expert with the Kaiser Family Foundation.

“We all need access but what that looks like for any given individual may not be identical.”

Take someone with a mobility impairment. If they want the option of living at home without going bankrupt, they’d be better off in Washington rather than Indiana.

The patchy way health care works means people with disabilities often either don’t get the care they need — or run into financial ruin trying to get it. For example, over 400,000 people in the United States are currently waiting for Medicaid to pay for costs associated with living independently at home. But people with disabilities also struggle with things like the high cost of prescription drugs. Take Abigail Bostwick of Wisconsin, who had to pay  $1,000 a month to treat her multiple sclerosis. Her family drained their savings and sold personal belongings to afford life-saving medication.

“I didn’t cry when I was handed the diagnosis of M.S.,” Bostwick told the New York Times. But after learning how much it would cost to treat it, “That was when I felt truly helpless.”

“We all need access but what that looks like for any given individual may not be identical,” said Cortland, a point he says he always underscores when he visits congressional offices.

“I am disabled by Crohn’s disease, which is a kind of inflammatory bowel disease. I require near constant medical management of that condition. Someone with mobility impairment may not require the same kind of constant medical management, they may need long-term services and supports to be able to realize their right to live independently in the community. But they may not have to see a doctor every month, every other week.”

“I think that’s part of the reason why… trying to define a benefit for that huge a population of people, it can be hugely complicated,” said Lilly, adding that the way Medicaid solves for this is by asking the federal government to waive rules for a specific population.

A Medicare for All plan could change all of this.

“You don’t have to say lose your job and slowly cycle through crises until you end up on Medicaid,” said Lilly.

Jayapal’s Medicare for All Act of 2019 and DeLauro’s Medicare for America fix the big problem with LTSS by making it a mandatory, covered benefit. Both bills view disability through a medical and social lens, and this is evident in how the bills determine LTSS eligibility.

“It’s important [to define] what disability means, because that could mean different things in different contexts,” said Musumeci. “But here [referring to the Jayapal bill], it seems to be setting out that there’s [something] medically diagnosable — be it physical or mental cognitive condition — going on and there’s a functional limitation in at least one of those self care or household activity areas.”

“In my home state of Illinois… the average rate for a direct-support professional [DSP] is $9.77 [per] hour. They just passed a bill to raise the minimum wage to $15 — that would not impact people who are DSP because of the way the Medicaid law is structured,” said Jorwic.

People with disabilities aren’t a monolith, so advocates aren’t just watching for LTSS. Cost-sharing is another critical bit. Under a Medicare for All plan, how much will a patient pay and how much will the government cover?

The Jayapal bill doesn’t require patients to pay anything out of pocket, while the DeLauro bill has a maximum out-of-pocket limit and makes LTSS exempt from cost-sharing. An updated version of the DeLauro bill, to be released in the spring, will also eliminate deductibles and exempt cost-sharing if there’s no generic drug available, a Democratic aide told ThinkProgress.

Cortland is happy with the fact that the Jayapal bill doesn’t appear to address the high costs of prescription drugs through formularies, or a list of drugs that insurers agree to cover through negotiations with pharmacy benefit managers and pharmaceutical companies.

“The problem with that approach is that they are hurting patients to spite pharma,” he said. “The Jayapal approach, as far as I can tell, takes a different approach which says, ‘If you don’t negotiate with us, if you don’t charge a reasonable price, we will come after your intellectual property protections. We will issue a license to another organization… to manufacture the medication at a reasonable price.’”

But while going over the bill with ThinkProgress by phone, he grew wary when he read about what happens to drugs during the interim period.

“How are you going to make sure that the governmental actors don’t have an incentive at the FDA to delay approval of drugs because we want cost data from other countries first? I’m not saying that is going to happen but unintended consequences in health care are to be expected.”

Then there’s the transition period. The Jayapal bill radically changes the system, abolishing virtually all private insurance, within about two years. This is a pretty quick transition, but to explain why, staff point to a recent study suggesting insurers will spike premiums or exit the market entirely during the transition.

“That sort of chaos and disruption writ large is going to kill people unless we think through very carefully the details of how we transition from where we are to where we’re going,” said Cortland.

“I am deeply concerned that a two-year transition period is insufficient. The Affordable Care Act [four-year] transition period is longer. It did not do nearly as much as… the Jayapal bill tries to do and its rollout was still plagued by trouble, it took heroic efforts to sort of rescue it from absolute disaster,” he added.

Alternatively, the DeLauro bill allows nearly anyone to opt into the new public plan and keeps employer-based private insurance around, with the goal of incrementally moving everyone into the program. But private insurers still aren’t required to cover LTSS, and the Medicaid program doesn’t sunset until year six of implementation. Some activists would also say DeLauro’s bill isn’t truly a Medicare For All bill because it’s not a single-payer plan.

“I think you put out some time frame as a marker to get things started but I think people acknowledge that as things are being implemented, the time frame may need to be adjusted,” siad Musumeci. Her colleague at the Kaiser Family Foundation, Jennifer Tolbert, noted Medicare was implemented within two years.

Lilly thinks a lot about transition, because a part of her job now is to help states transform their mental health systems after being sued.

“There are going to be transitions to get to a better system, there has to be, but we need to do those right and make sure folks are protected as we are doing it.”

“We’ve watched people who’ve had their hours cut, oftentimes folks with disabilities. The example I’m thinking of is a gentleman who was on a ventilator, I want to say in Kansas, and who had his hours cut and ended up dying,” she said.

“There are going to be transitions to get to a better system, there has to be, but we need to do those right and make sure folks are protected as we are doing it,” she added.

Another big question about the transition is what lawmakers will do to address an exacerbated provider shortage.

“More people having health coverage means you need more health care providers. Federal law currently caps the number of training slots we have for doctors. Does the Medicare for All plan address that or separately, as the sponsor?” said Cortland.

“That terrifies me as a chronically ill disabled patient. I’m terrified about the provider shortage because, even though I have organized my life [and] my skill set around acquiring health care, I still run into provider shortages all of the time, in Massachusetts where we’re not exactly hurting for medical institutions.”

Ultimately, many advocates are happy to have moved the “Overton window” of what Medicare for All should look like.

“The question now is, how are people with disabilities going to get access to better services?” said Lilly.