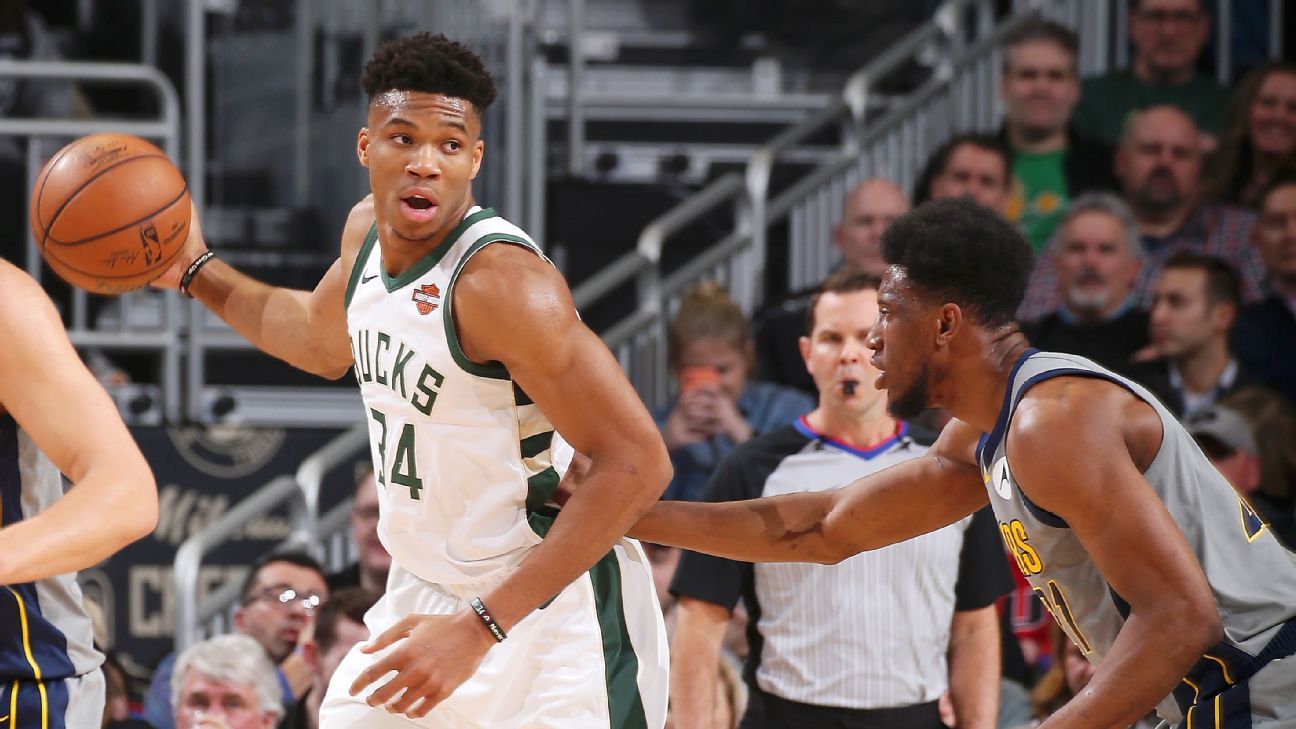 MILWAUKEE — Conventional wisdom suggests that the Indiana Pacers should have collapsed by now.

They lost their franchise player, Victor Oladipo, to a season-ending injury in late January. The star-less Pacers then sustained minor injuries to other key players, including Domantas Sabonis and Tyreke Evans. Their defense has stayed one of the league’s best, thanks largely to center Myles Turner, but their roster of relatively anonymous veterans is easy for outsiders to overlook.

Yet the Pacers are keeping things interesting in the Eastern Conference, threatening to steal a top-four playoff seeding. The team has turned the page from the Oladipo injury. They have grown tired of being asked who will step up.

The Milwaukee Bucks, owners of the Eastern Conference’s top seed, soundly defeated the Pacers 117-98 on Thursday in what could be a sign of tougher times to come for Indiana. The road only gets bumpier for Indiana as the Engine That Could huffs and puffs toward the finish line. Thursday night’s game against the Bucks kicked off a stretch during which the Pacers are slated to play 10 of their next 11 games on the road, including 10 against playoff-bound teams.

The good news for Indiana is that they have already taken their punishment from the Bucks; Milwaukee clinched the regular season series 3-1. But entering play Thursday, the Pacers had the sixth-hardest strength of schedule remaining in the NBA (.545, according to ESPN’s Basketball Playoff Index).

Indiana is an average offensive team, ranking 16th in the NBA overall in efficiency and 19th since Oladipo went down. What they lack in offensive pizzazz, Indy makes up for in consistency. At least six Pacers have scored in double-figures in 40 of their 65 games. Darren Collison, Bojan Bogdonovic, Thaddeus Young, Wesley Matthews, Cory Joseph and Myles Turner all put up double figures against the Bucks.

“One of the biggest things that has gotten us to this point is us playing as a collective unit and playing together,” Young said after the game.

Indiana’s egalitarian offense is complemented by an elite defense. Even without Oladipo, Indiana has been able to hang onto the No. 2 defensive rating behind only Milwaukee, mostly on the strength of their ability to take the ball away (only the Oklahoma City Thunder and Phoenix Suns average more steals per game).

Even Bucks coach Mike Budenholzer, who has repeatedly said he doesn’t watch film on other teams, said he has taken note of the Pacers.

“I would say Indiana is one of the teams that I do try to watch,” Budenholzer said. “This is the fourth time we’ve played them. I think [McMillan] does a wonderful job. I think his players play so hard and play with a physicality that is within the guidelines. I think it is a great example for the rest of the league. I am so impressed by Nate [McMillan] and his group.”

It’s easy to see the Pacers possess fight. In the first quarter against the Bucks, the Pacers rallied from down eight to take a one-point lead. In the second quarter, Indianapolis narrowed a 14-point gap to four by halftime. Indiana even had a one-point lead within the first minute of the second half, frustrating Giannis Antetokounmpo through the first 30 minutes of the game as Milwaukee’s MVP candidate had more turnovers (four) than field goals (2-of-8) at that point.

But then Antetokounmpo was able to pick apart Indiana’s defensive offerings, commencing when he was issued a technical foul with 5 minutes, 49 seconds left in the third quarter for arguing with referee Nick Buchert over a Turner block that Antetokounmpo thought he was fouled on. Bogdanovic would miss the free throw that would have cut Indiana’s deficit to two, however, and the Bucks immediately went on a 13-0 run that allowed them to pull away.

“Too much Antetokounmpo and too much Middleton,” McMillan said after the game.

Antetokounmpo finished with 29 points, 12 rebounds and 5 assists. His six second-half dunks, all of them post-technical, eclipsed his previous second-half record by one.

“That was my first time seeing him get mad like that,” Bucks guard Eric Bledsoe said after the game. “Especially getting that tech. I never saw that before but I like it.”

Now, the Pacers must journey on.

“We got away from what we were doing,” Young said. “We didn’t play our type of basketball. We need to get back into sync.”