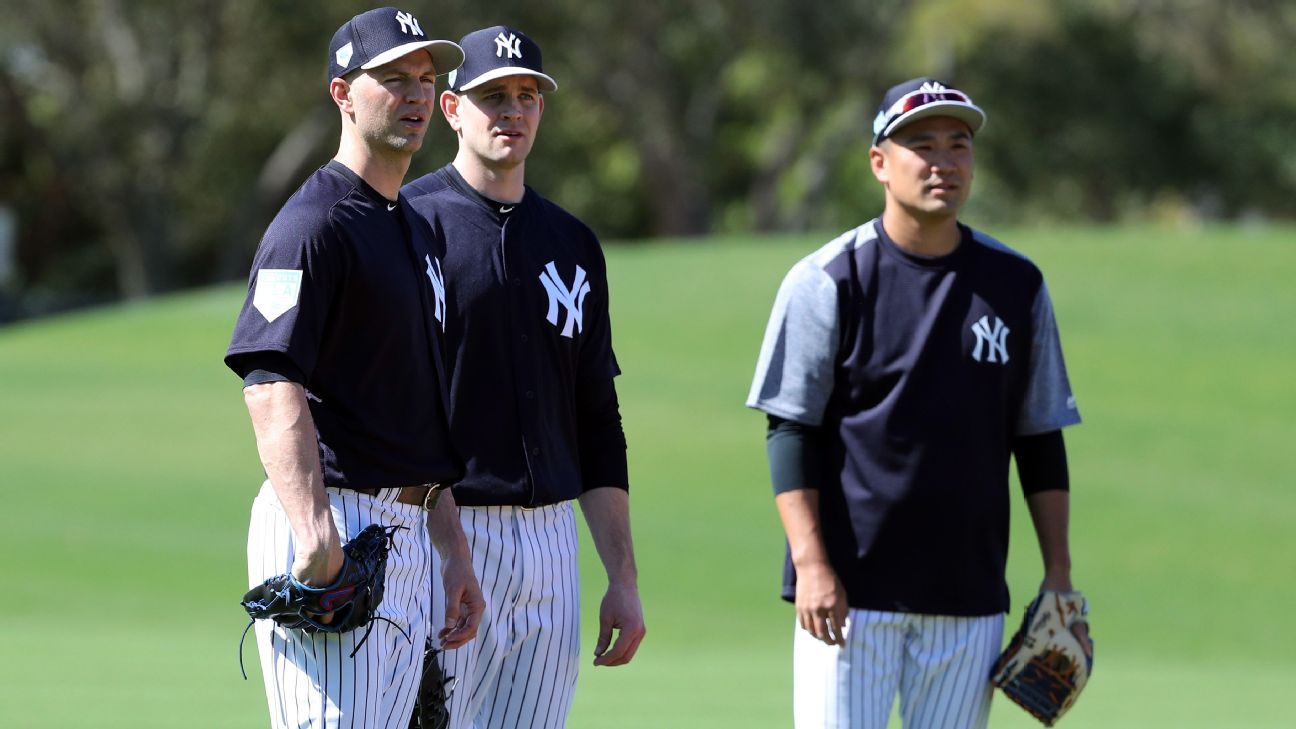 TAMPA, Fla. — All winter, it was practically a foregone conclusion who’d be starting Opening Day for the New York Yankees.

Then, about 15 minutes prior to Tuesday’s spring training game against the Braves, it became dramatically less certain.

Although an MRI of Luis Severino‘s right shoulder came back that afternoon mostly positive, only revealing rotator cuff inflammation, the Yankees were still forced to sideline the right-hander. He won’t be making his long-expected start at Yankee Stadium on March 28 after all.

Who will be pitching in his place that day instead? While a front-runner appears to be emerging, there are others perhaps worthy of consideration. Here’s a rundown of potential Yankees Opening Day starters and the likelihood they’ll be handed the ball to start the season. [Vote for your favorite option here.]

Not in contention: Severino, CC Sabathia

While Severino could land on the injured list for a short stint at the start of the regular season, the Yankees are expecting to make a similar move with Sabathia.

Manager Aaron Boone said Wednesday that Sabathia probably would briefly go on the injured list as he works back from an offseason that included procedures on his knee and heart. The left-hander is also facing a five-game suspension at the start of the season, which would force him to miss a potential Opening Day start even if he were fully healthy and ready to pitch.

Because Severino and Sabathia are on the mend, Boone indicated this week he’d be willing to employ an “opener” at times this season. He did note that although the Yankees have three off-days within the first two weeks of the season, they will need to field a full five-man rotation early.

That means some combination of 26-year-olds Domingo German and Luis Cessa and 24-year-old Jonathan Loaisiga likely will begin the year with the starting staff. Boone said if the Yankees end up going with the bullpenning tactic to open an early-season game, one of these three pitchers could find themselves entering after a reliever faced the opposing teams’ first six or so batters.

A bullpen game in the opener against the Orioles could mean seeing a reliever like Chad Green or Jonathan Holder take the mound first. Green, who kicked off his career four seasons ago as a starter and long reliever, has some experience beginning games. Last year, though, he really embraced his role entering in the middle innings. He was arguably the Yankees’ most dependable reliever in 2018.

Holder pitched first in the Yankees’ lone bullpen game last season. By that late September day, the Yankees’ playoff seeding was set, and they were trying to reset their rotation for October. He pitched one full inning before turning it over to others. Don’t expect him to be doing that on this year’s Opening Day, though.

Yes, the Yankees’ rotation appears to be in early trouble. And yes, the 31-year-old left-hander who has won a Cy Young Award and is a two-time All-Star is still unclaimed in free agency. So it makes sense why there is an appetite among the fan base for adding him while the Yankees’ ace continues to heal.

But the thing is, what would happen to Keuchel once Severino returned? How would the rotation change if Severino’s injury doesn’t keep him out long, as expected? What happens if Sabathia returns at full health in the middle of April and begins pitching well? 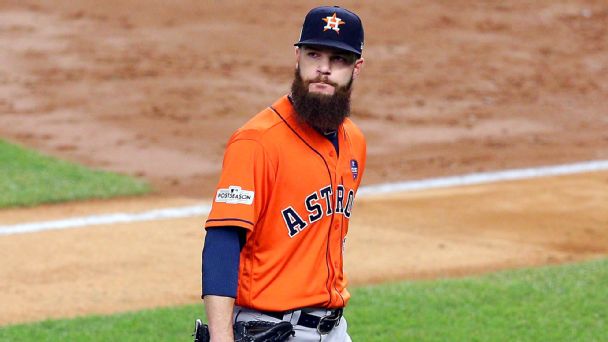 Why the market for Dallas Keuchel slowed to a crawl. Buster Olney (ESPN+) »

Still, it could (and perhaps should) be worth having the debate at One Steinbrenner Drive this spring over whether or not to add a free-agent starter to the rotation in the coming days. Perhaps those discussions will be had if Severino’s two-week resting period doesn’t go as planned and he ends up needing more time to get ready for the season. If his shoulder injury becomes more serious than previously believed, phone calls on Keuchel (or perhaps another available starter like Gio Gonzalez) ought to be made.

Keuchel would make a good Opening Day option. After all, he’s done it before. He’s 3-0 in three such starts in his career. In addition to shutting out Cleveland and Seattle on Opening Day 2015 and 2017, respectively, he also beat the Yankees on Opening Day 2016 in the Bronx.

For now, though, the odds that he ends up in pinstripes remain extremely low. General manager Brian Cashman won’t completely shut the door on any signing, but he has emphatically pledged his loyalty to the pitching depth the Yankees currently have. “What I’ve got is what I’ve got, and we’re comfortable with that,” he said.

More likely to pitch March 28 than Keuchel right now is this trio of young right-handers that the Yankees have expressed their belief in often since Severino’s injury.

All three have pitched in big-league games the past two seasons. Their performances in those games has been mixed.

German was at his best at the start of last May and in the middle of last June. At the time, he had been forced into the rotation after lefty Jordan Montgomery hurt his elbow, requiring Tommy John surgery. Montgomery isn’t expected to return until after this year’s All-Star Game. Although German didn’t factor into a decision in his first two outings last May, he also didn’t allow a run in 10 innings, while striking out 13. A month later, back-to-back strong starts against Tampa Bay and Seattle resulted in his only wins of the season.

Baseball season is almost here! Check out updates from all 30 teams in Florida and Arizona. Complete coverage »

“He has a chance to be something,” Cashman said. “I know he can impact us in a positive way here.”

Loaisiga was particularly dominant during his first three big-league starts last June, when he went 2-0, allowing just three runs in 14 innings. After a fourth start, one against Atlanta in July in which he lasted just four innings, Loaisiga was sent to Triple-A. Five days after being sent down, he suffered a shoulder injury that kept him out of big-league action until late in the year.

The results so far this spring have been quite mixed for the three pitchers. Cessa has been good enough, allowing only one run and four hits in the five innings he’s pitched. German has been significantly more impressive, striking out seven in 4 2/3 scoreless innings.

Loaisiga, who was touched up in Wednesday’s start against St. Louis — he gave up four runs, including three in the third inning — has had his strikeout pitch working. Despite his struggles Wednesday, he also struck out five in his first trip through the batting order. His 96 mph fastball paired well with a sharp breaking pitch the first two innings.

All three of these pitchers need more seasoning before they’re ready to make an Opening Day start. Still, expect at least one of them on the roster because of the injuries.

Chances any of them pitches Opening Day: Very low

Two of the best and most veteran pitchers on the staff are a pair of relative newcomer lefties. When it comes to service time in the Bronx, Happ is the more tenured of the two; he came over at last year’s trade deadline and flat-out dominated. He went 7-0 with a 2.69 ERA through 11 starts in pinstripes late last season.

The MLB season will be here before you know it. That means it’s time to draft your fantasy baseball team.
Create or join a league today.
Get rankings and more for your draft.

Another trade acquisition, Paxton arrives in New York after an offseason move that sent promising young pitcher Justus Sheffield to Seattle. Paxton posted a 3.42 ERA in six seasons with the Mariners and had a 11.0 strikeouts/nine innings the past two years.

Of these two, only Happ has Opening Day experience, and even that is limited. His lone Opening Day start came for the Blue Jays last March when the Yankees began the season at the Rogers Centre in Toronto. In the first inning of that game, Giancarlo Stanton hit his first homer in a Yankees uniform, crushing a two-run blast off Happ. The lefty went on to allow one more unearned run while striking out five in a 4 2/3-inning outing, taking the loss.

The results haven’t necessarily been ideal for Paxton and Happ to this point in the spring, but much of that is the product of tinkering, experimenting and developing pitches. They’ve combined to give up three homers in 8 1/3 innings. Paxton has said it isn’t until late in spring training that he feels comfortable with the movement on his breaking pitches.

The man to start: Masahiro Tanaka

As solid a choice as Paxton or Happ might be, Tanaka is the most logical of New York’s options to start Opening Day. So much is lined up in his favor; notably, his performance at the start of seasons.

Tanaka is 13-4 with a 3.38 ERA in starts made in March and April throughout his career. He also has vastly more Opening Day experience than the aforementioned pitchers, save Keuchel. Unlike Keuchel, however, season openers haven’t been kind to Tanaka, who is 0-2 in three such starts. In fact, one of those outings came against a victorious Keuchel.

This spring, Tanaka, who is scheduled to pitch Friday, has looked sharp. He pitched three innings in his only other start, allowing one hit in a scoreless appearance. The hit actually came on a leadoff triple that was hit over center fielder Estevan Florial’s head. The speedy, prized Yankees prospect Florial likely should have caught the deep fly ball.

What also makes Tanaka New York’s best option for March 28? The fact that he’s currently lined up to pitch that day, assuming the Yankees stick to the current schedule of their rotation. It also helps that Boone has said Tanaka is a viable candidate to appear in that game.