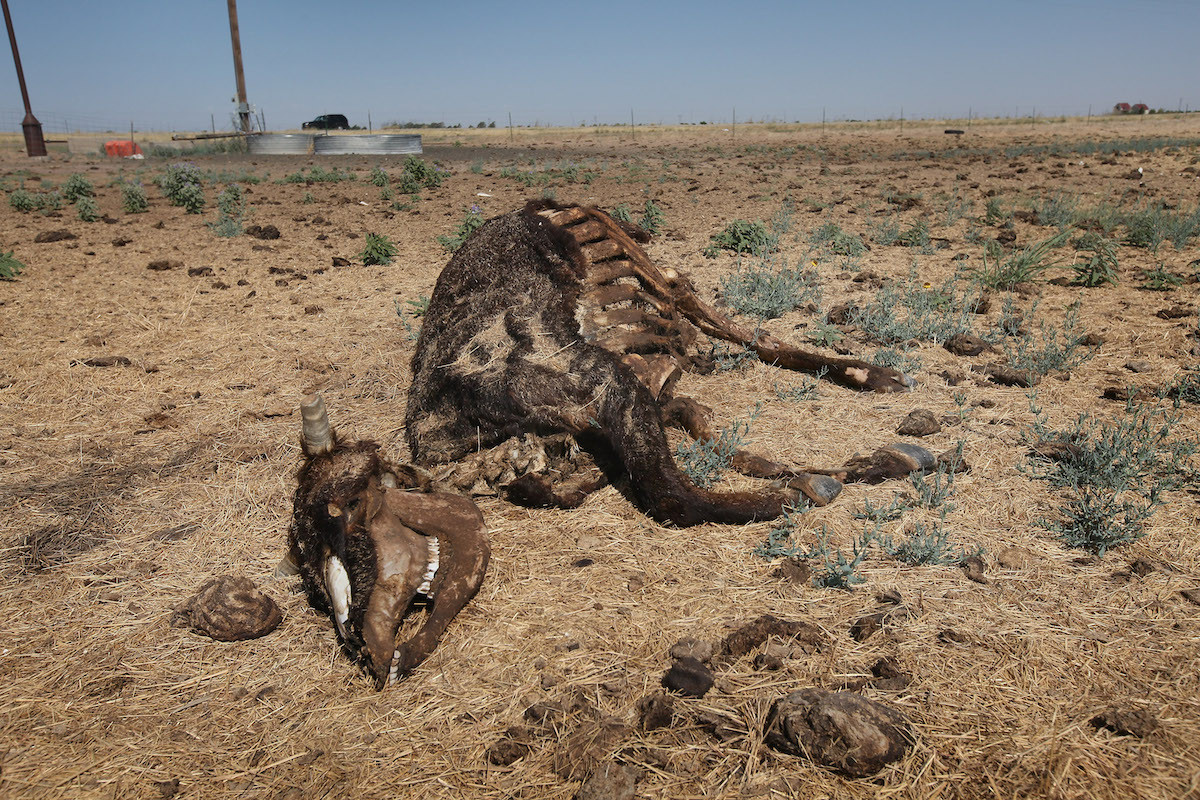 One of the most common Republican attack lines since the Green New Deal resolution was introduced last month is that Democrats, namely Rep. Alexandria Ocasio-Cortez (D-NY), “want to take away your hamburgers.”

In the past week, Republican House members have staged a press conference during which they ate hamburgers in front of the U.S. Capitol. Republican senators have quipped, “maybe the chicken caucus is in favor of getting rid of cows.” And right-wing media outlets have run pun-filled headlines, like the Washington Times,’ “Sizzling anti-burger narrative puts Alexandria Ocasio-Cortez’s Green New Deal in a pickle.”

But the truth is, the real threat to hamburgers — and to food supplies in general — is Republican inaction on climate change.

The overheated, drought-riddled world their policies are driving us toward will be devastating to cattle. Red meat will become a scarce commodity — as it did during the severe drought in Texas earlier this decade.

Republicans’ hamburger attack might give them a new zinger to use on Twitter or in conservative conferences, but it isn’t rooted in reality. The Green New Deal resolution introduced by Ocasio-Cortez and Sen. Ed Markey (D-MA) is silent on the entire subject of meat consumption and cows. Instead, its central focus is replacing fossil fuels with clean energy as rapidly as possible.

Before @AOC and @SenMarkey outlaw our hamburgers because of the Green New Deal, we have to take full advantage of this opportunity pic.twitter.com/i2gMpSPLWf

A “frequently asked questions” document that was briefly posted on Ocasio-Cortez’s website contained language saying, “we aren’t sure that we’ll be able to fully get rid of farting cows” in 10 years (since methane is a potent greenhouse gas).

But the document was quickly removed, and Ocasio-Cortez said it was a “draft” that never should have been posted.

The actual resolution says only that the goal of slashing carbon pollution over the next decade should be achieved by “working collaboratively with farmers and ranchers in the United States to eliminate pollution and greenhouse gas emissions from the agricultural sector as much as is technologically feasible.”

Yes, Ocasio-Cortez did say last month that in order to address climate change, “We gotta address factory farming. Maybe we shouldn’t be eating a hamburger for breakfast, lunch, and dinner.”

But any cardiologist would say the same thing. Indeed, three years ago, when China’s government put forward dietary guidelines to reduce the country’s meat consumption by 50 percent, they enlisted the beefy Hollywood actor and former Republican governor of California, Arnold Schwarzenegger, to spread the message “less meat, less heat.”

Reducing beef consumption isn’t just good for your health, it’s needed to preserve a livable climate. The fact that per capita red meat consumption has been on the decline in this country in recent decades suggests Americans understand one if not both of those facts.

But the GOP effort to block any serious discussion or legislation to address climate change has never been based on facts.

After all, if Republican leaders and President Donald Trump actually accepted climate science, they would understand that their do-nothing strategy is the greatest imaginable threat to every single type of food production, including livestock.

Because grazing cattle require so much arable land and fresh water, cows are among the biggest victims of any extended drought — and climate change is already driving a major increase in the duration and intensity of droughts in this country and around the world.

Higher temperatures from global warming cause greater evaporation, drying up reservoirs and parching the land. At the same time, climatic shifts in precipitation are causing longer dry spells in the Great Plains and Southwest, like the epic multi-year drought California endured earlier in the decade.

Together, these factors turn ordinary droughts into mega-droughts, which result in less water for people and cattle — and for the crops we both feed on. In the early part of this decade, Texas was in the middle of its worst drought in recorded history, causing epic water shortages and cutting down crops like hay and corn that serve as cattle feed.

Many ranchers sold “off large parts of their herds as the grass dries out and water becomes scarce,” the New York Times reported at the time. Worse, “many cattle are headed to the slaughterhouses now, reducing future supply.” The impacts were severe.  “A 2,000-employee beef plant north of Lubbock has become a casualty of years of drought, which has led to the smallest U.S. cattle herd in 60 years,” the Houston Chronicle reported in 2013.

But now imagine that years of drought routinely turn into decades of drought, so-called mega-droughts, thanks to climate change. That will devastate cattle and crops.

And this isn’t a scenario for the distant future. In December, the Weather Channel reported that “the Southwest may currently be enduring its first mega-drought in over 500 years.”

As Columbia University hydro-climatologist Park Williams told The Atlantic, “The last 19 years have been equivalent to the worst 19 years of the worst mega-droughts on record.” He added that the current drought was “substantially worse than it would have been without global warming” — some 62 percent more severe.

And the worst is yet to come, especially if the ongoing efforts by Trump and the Republican leadership to undermine or reverse U.S. climate action continues.

In 2017, the White House approved the definitive National Climate Assessment by America’s top scientists, which also projected that most of the country would see serious to devastating drops in soil moisture most of the year.

The following map shows the key projections for change in soil moisture by century’s end in the “higher emissions” (business as usual) case, the one the Trump administration’s policies would lead to.

This would be the “new normal” climate, a near permanent state of drought over large segments of our country, including much of the California and Great Plains breadbaskets. In such a world, the United States — and indeed, a great many countries — would routinely suffer mega-droughts as intense as the 1930s Dust Bowl, but lasting many decades and much hotter.

This is not a world where many cattle survive. In fact, trying to feed what will then be 10 billion people with such a sharp reduction in both arable land and potable water means that livestock — which require much more of both than most food sources — would become a luxury item.

To get to the more manageable “lower emissions” scenario, America and the world must far exceed the emissions reduction goals agreed to in Paris in December 2015. In short, we need something approximating a Green New Deal.

House Republicans on the Natural Resources Committee mockingly tweeted that they need to eat hamburgers now before they disappear.

Thanks to their blinkered denial of the climate crisis, that may be more prescient than they realize.