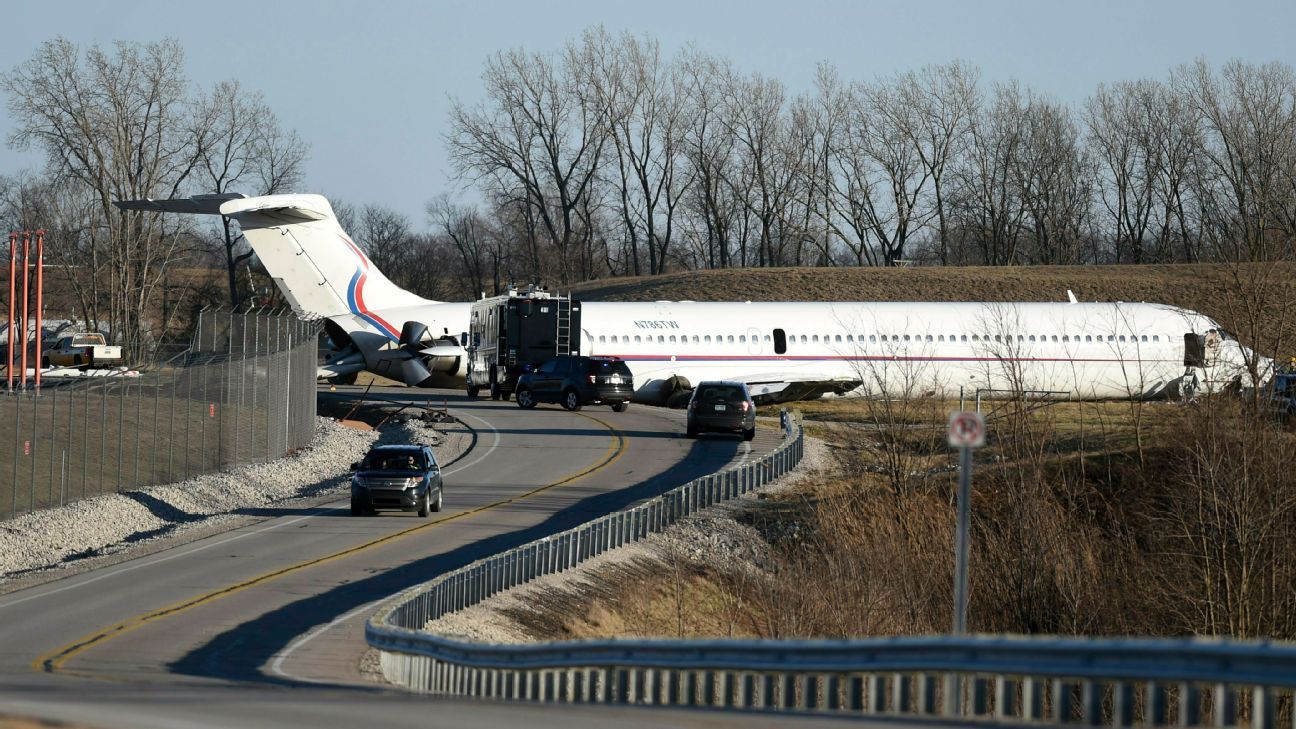 A plane carrying the University of Michigan basketball team had already reached the critical speed at which pilots could no longer stop it on the runway. The captain abandoned the takeoff anyway, surprising the pilot in the next seat.

The plane hurtled 950 feet past the end of the runway, tore through a chain-link fence and crossed a paved road before stopping.

The captain’s last-second decision to abort the takeoff in the 2017 incident might have prevented a disaster, safety officials said Thursday.

“These two pilots did everything right after things started to go very wrong,” said Robert Sumwalt, the chairman of the National Transportation Safety Board.

In its report on the accident in Ypsilanti Township, Michigan, the board determined that a jammed part prevented pilots from tilting the nose of their MD-83 jet upward during takeoff. The pilots, however, had no way of knowing that until they were speeding down the runway at 158 mph, the board concluded.

The 110 passengers and six crew members used emergency chutes to escape, although one slide failed to inflate. One passenger suffered minor injuries.

The plane, operated by Ameristar Charters, was heavily damaged.

After the accident, the pilots faced criticism for aborting the takeoff after the plane reached the speed at which pilots must commit to take off — or almost certainly overshoot the runway even with heavy braking.

The captain, Mark Radloff, told investigators that when he tried to tilt the plane upward it felt heavy, as if there were a stack of bricks on the nose.

“This thing is not flying,” Radloff said to Andreas Gruseus, who was instructing Radloff on the plane. Radloff saw a chain-link fence in the distance and didn’t think the plane could clear it.

Later, Gruseus told Radloff he wasn’t supposed to abandon the takeoff at such a high speed.

“I know, but I had nothing, I had absolutely nothing” to get the nose up, he said.

“With a different pilot on this airplane, there might have been people hurt or even killed,” Ameristar Vice President Stacy Muth said in an interview. “All we lost was the airplane.”

The NTSB said the plane was properly maintained, but components in an elevator — a part that pilots adjust to change the pitch or nose direction — jammed because the plane was parked outside a hangar for two days during windy weather.

The board recommended that aircraft maker Boeing modify DC-9 and MD-80-series jets to prevent ground wind from causing elevator components to jam.

Investigators also said Boeing should develop procedures to help pilots check for jammed elevators before takeoff. The Ameristar pilots would have needed a boom or to climb on the plane’s tail to inspect the parts.

The Willow Run Airport, about 30 miles west of Detroit and used mostly for charters and private planes, added a 1,000-foot (300-meter) runoff area during work from 2006 to 2009. The NTSB said the safety feature, which it recommended and the Federal Aviation Administration promoted at many airports, probably prevented a worse outcome for the incident on March 8, 2017.

The Michigan basketball team caught another plane the following day to the Big Ten Conference tournament in Washington, D.C. They won the tournament.