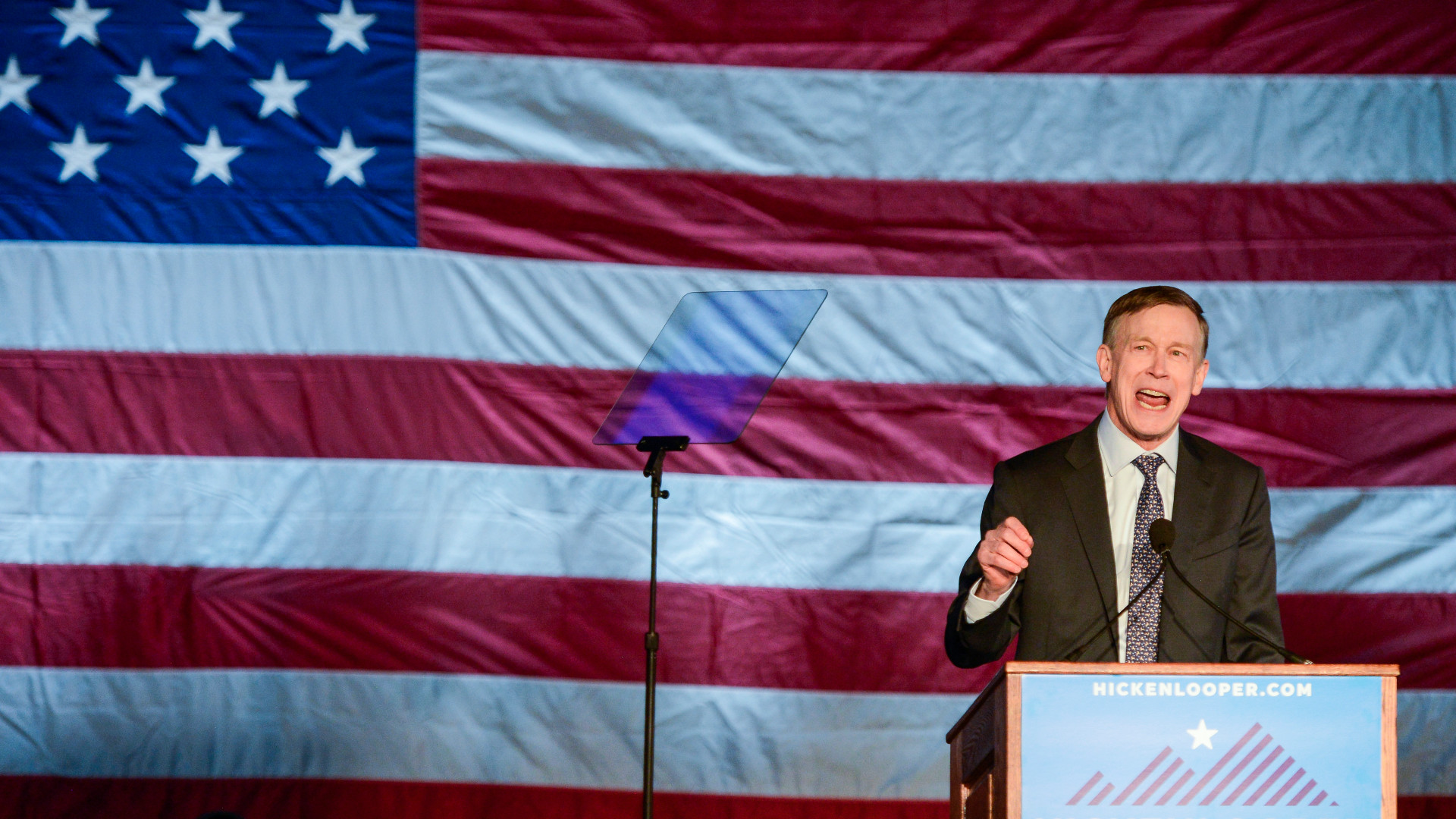 Former Colorado Gov. John Hickenlooper (D) is running for president, and he’s hoping he can take his gun control efforts to the White House.

Hickenlooper, 67, governed Colorado at the time of the July 2012 movie theater shooting in the city of Aurora that killed 12 people and injured 50. The massacre deeply shook the state, which ramped up efforts to put restrictions on the sale of firearms. Hickenlooper was at the forefront of that effort.

“After Aurora, we stood up to the NRA (National Rifle Association) and we passed universal background checks and limits on high capacity magazines — in a western state,” he told a cheering crowd in the shadow of Denver’s Capitol Dome at his official campaign launch late Thursday, in the heart of the city he once led as mayor.

His speech highlighted Colorado’s progressive water plan use, its booming economy, universal broadband that he vowed “will become national policy the day I’m elected,” and health care that is almost universally available in the state. “Ninety-five percent of our people now have health care coverage,” he said.

Hickenlooper also tore into the incumbent president for his vitriolic rhetoric and policies that the candidate said has divided the country. “Donald Trump is alienating our allies, ripping away our healthcare, endangering our planet, and destroying our democracy,” Hickenlooper declared.

He is also known for his outspoken stance on broadening federal laws on marijuana. During his tenure, Colorado in 2012 legalized cannabis after a successful ballot initiative.

But it is his decision to make gun control — one of the most divisive issues in the nation — central to his campaign that has earned Hickenlooper plaudits.

Gun control advocates were delighted by his announcement earlier this week that he planned to run for president, saying his candidacy would help elevate an issue that recently has moved to the forefront of political debate.

“The tide has turned when it comes to gun safety. It’s clear that Democrats running for president in 2020 realize that voters expect to know exactly how they plan to address America’s gun crisis if they win the White House,” said Katie Peters, communications director of the Giffords Law Center to Prevent Gun Violence, in a statement shared with ThinkProgress.

“John Hickenlooper represents a new wave of leaders at the state level who showed the country we could successfully pass laws that save lives. Candidates running for office with strong track records of standing up to the gun lobby is an important sign of progress for the gun safety movement,” she added.

Notably, before the Aurora shooting, Hickenlooper did not support additional gun control legislation, focusing in the wake of the tragedy on mental health care.

By December of 2012, however, Hickenlooper said he believed the “time was right” to discuss gun control, telling the Associated Press he had waited because “wanted to have at least a couple of months off after the shooting in Aurora to let people process and grieve and get a little space.” During his state of the state address in early 2013, the governor offered more details.

“We shouldn’t be restrained from discussing any of these issues,” he said. “Our democracy demands this type of debate. Let me prime the pump: Why not have universal background checks for all gun sales?”

After a prolonged fight in the state legislature, Hickenlooper ultimately signed a bill doing exactly that in Colorado, as well as another bill that banned high-capacity magazines in the state.

As The Trace noted earlier this year, the fact that checks did not increase in Colorado likely means that gun owners and sellers in the state have been ignoring the law and that previously unregulated sales remain unchecked.

Implementing background checks can be a major challenge. As ThinkProgress reported earlier this week, last year, the FBI failed last year to complete 276,000 gun background checks within a three-day time window meant to prevent the sale of firearms to individuals not legally allowed to own them. Notably, if a background check is not completed within three days, federal laws allow a gun dealer make the sale anyway. (A number of dealers choose not to do so.)

Universal background checks have, however, been found to reduce illegal gun trafficking, reducing the rate at which people commit crimes with weapon they not purchased from retailers within the state, according to a Johns Hopkins University study looking at data from the Bureau of Alcohol, Tobacco, Firearms and Explosives.

Hickenlooper’s focus on universal background checks is likely to be broadly popular. A Quinnipiac University poll conducted last year found that 97 percent of American voters approve of the policy, with identical levels of support among people living in households with a gun.

His other major achievement while governor in the area of gun control — banning high capacity magazines — has been more polemical. After signing the bill into law, the Denver Post reported that, in a private conversation with Colorado sheriffs, Hickenlooper said he did not expect the measure to be so controversial.

“A lot of people, if they’d known how much commotion was going to come out of the high capacity magazines, probably would have looked for something different or a different approach,” Hickenlooper said. “One of my staff made a commitment that we would sign it if it got passed. To be honest, no one in our office thought it would get through the legislature.”

As ThinkProgress has previously reported, the gun violence debate has changed significantly over the last year, beginning with the response to the Parkland mass shooting that left 17 people dead at Marjory Stoneman Douglas High School in Florida.

For the first time, gun-violence prevention groups outspent the NRA on political campaigns during the 2018 midterms, and gun safety advocates won a number of elections in November. Additionally, state legislatures across the country have passed a series of major anti-gun violence bills, and even the NRA has acknowledged the shift.

“What has changed is that, for the first time, the gun control groups are well-funded and have efforts nationwide,” Jennifer Baker, a spokesperson for the NRA’s lobbying arm, told NPR in February.

Ramped up spending by gun control groups, said Baker, “has allowed these organizations to have a presence in the state capitals on lobbying and to really put forth an effort we’ve never seen.”