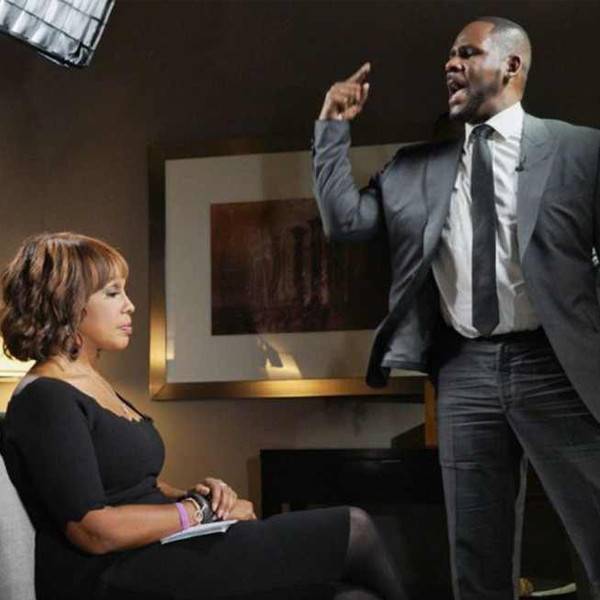 It may have been an interview about R. Kelly, but people are talking just as much about Gayle King.

The CBS This Morning anchor has captivated viewers around the country with the composure she kept during a wildly heated interview with the singer this week. The network aired various parts of the sit-down over the course of this week, though it was the initial teaser clips aired Tuesday night that really grabbed people’s attention. In the short videos, Kelly got worked up as he denied allegedly holding women against their will.

“This is not me! I’m fighting for my f–king life!” he exclaimed as he hit his hands together and began to cry. In more of that moment that aired the next morning, Kelly continued his outburst as he stood up screaming and crying about the allegations against him and the state of his life now. Meanwhile, King remained admirably composed and a photo capturing their contrasting dispositions quickly went viral.

As the anchor explained to Stephen Colbert on Thursday night, she knew it was better to remain calm if the interview had any hope of continuing.

“I could see him getting more heated. He was upset with me about some of the questions. That’s ok. He was a little irritated. That’s ok,” she recalled. “When I see Robert getting really upset and he stands out of his seat, my initial reaction is, ‘Oh God, please don’t leave. Please don’t leave. Please don’t leave because I really thought we’ve seen him storm out of interviews before, so I thought he was going to do that and I was thinking, ‘I’m not done with my questions. What can I do to save this interview?'”

Instead of telling him to calm down, in fear that would only anger him more, “I thought if I just sit there quietly looking at him, he would know I’m not going anywhere and I’ll just wait for you to finish whatever this is and then you’ll sit back down in the seat and he did that,” King explained, noting that saying his name ended up being soothing.

“I thought if we had both gotten emotional and amped up like that, what good would come of that?”

While the interview has certainly made headlines this week, Kelly’s now-infamous reaction was not the one King had hoped for.

“When I went into the interview…I knew he wasn’t going to say, ‘You know Gayle, you’re right, you’re right. I’ve done terrible things,’ but I did think that on some level he would have a moment of reflection. He would have contrition,” she said. Last month, Kelly pleaded not guilty to 10 counts of aggravated criminal sexual abuse and has long denied any allegations of misconduct, including during his interview with King.

“It became very troubling to me to see him really just fall apart,” King continued. “I thought we were witnessing the self destruction of a man having a breakdown and that’s never a good thing to see—never.”