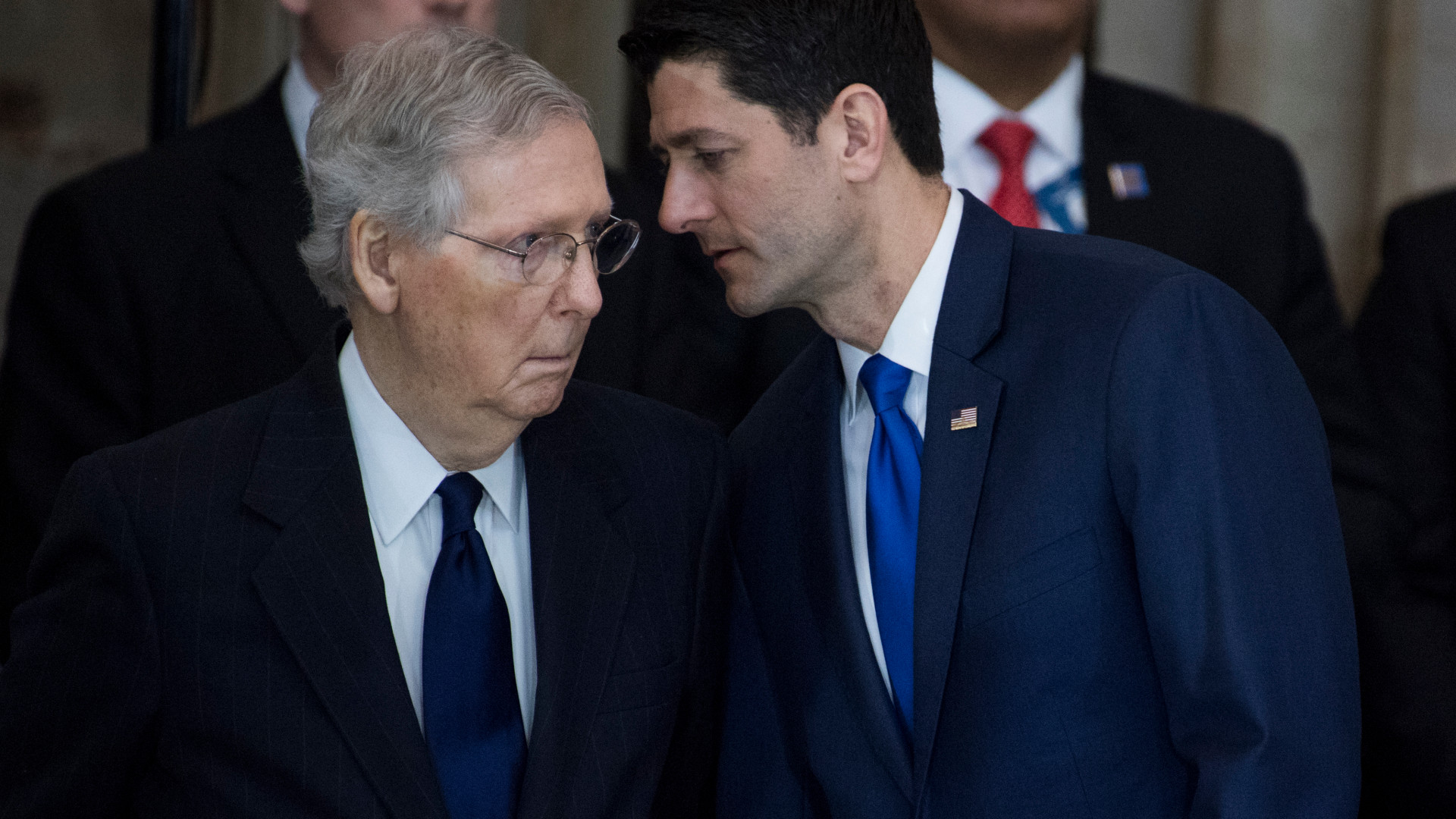 But when Democrats ramped up their scrutiny of the president after retaking the House majority in the 2018 midterm elections, they encountered a sprawling backlog of missed oversight opportunities. During the first two years of the Trump presidency, the GOP-dominated Congress ignored serious red flags about Russian election meddling and Trump’s ties to Russia, any one of which should have triggered a congressional investigation.

Still, Republicans took no action. Even when confronted with intelligence briefings (as far back as 2015) about Russian interference in the 2016 presidential campaign, GOP leaders in the House and Senate declined to assume oversight responsibilities or launch serious investigations.

Even when investigations were launched — such those in the House and Senate Select Committees on Intelligence, which both began under Republican leadership — they appeared perfunctory or politicized. The House select committee’s investigation closed with the conclusion that there was “no evidence” of collusion between Trump and Russia. Rep. Devin Nunes (R-CA) used his leadership role to push conspiracy theories about the “deep state” working against the president.

But with the Democrats now in charge of the House, the pervasive lack of seriousness surrounding congressional investigations looks set to finally change. On Monday, under the leadership of Rep. Jerrold Nadler (D-NY), the House Judiciary Committee launched a broad-ranging investigation into Trump’s campaign, presidency, and private business practices by requesting documents from 81 companies, federal agencies, U.S. and foreign individuals, Republican organizations, and people within Trump’s inner circle, including several members of his family. The committee also plans to seek documents from groups and individuals not on the initial list, and a number of other House committees have or will be launching probes into Trump’s alleged crimes.

The White House and GOP congressional leaders have attacked the investigations. White House Press Secretary Sarah Huckabee Sanders in a statement on Monday described the Judiciary Committee’s investigation as “disgraceful and abusive” and a form of harassment because, she claimed, the Democrats’ “two-year false narrative of ‘Russia collusion’ is crumbling.”

Sanders’ claim is baseless: by most accounts, evidence is rapidly mounting that the Trump campaign knew about Russia’s election meddling efforts and sought actively to participate in those efforts. Just last week, Trump’s former personal attorney and longtime fixer Michael Cohen told Congress that Trump knew in advance that WikiLeaks would release Democratic National Committee emails hacked by Russian intelligence operatives. Despite the explosive testimony, almost all Republicans on the House Committee on Oversight and Reform used their time to attack Cohen’s credibility to protect Trump instead of asking about a series of alleged crimes — extending a years-long pattern of ignoring evidence that Russia interfered in the 2016 election to help Trump.

Here are the known instances since 2015 in which Republican leaders have been confronted with credible, actionable evidence of Russian meddling, Trump campaign collusion, or presidential malfeasance, and the steps they have taken to avoid oversight or downplay the implications of the information presented to them.

All the president’s men

Senate Majority Leader Mitch McConnell (R-KY) was briefed by U.S. intelligence officials on Russian attempts to hack the DNC in 2015, in August and September of 2016, and in May of 2017. Despite the intelligence briefings, in 2016 McConnell rejected calls for a special congressional panel to investigate the hacks, saying that it is “is a serious issue, but it doesn’t require a select committee.” McConnell blocked a bipartisan statement by congressional leaders condemning Russia for its attacks on the election in September of 2016, and cast doubt on intelligence backing the Russian interference claims.

Still, McConnell has taken the position that the president’s attacks don’t constitute a threat to the special counsel. In 2018, McConnell repeatedly used procedural tactics to block bipartisan legislation written to protect Mueller’s investigation from possible interference by the president.

When McConnell does talk about the Mueller probe, he mirrors the president in denigrating and downplaying it. Last June, he said the special counsel should “wrap it up” and complete his investigation because he did not know “how much more they think they can find out.” Recently, he’s allowed Sen. Richard Burr (R-NC) to continue to oversee the Senate Intelligence Committee’s Russia investigation, despite Burr’s statements that he sees no evidence of collusion.

Like McConnell, Rep. Nunes, apparently ignored the numerous intelligence briefings on Russia’s election meddling he was given while serving as chair of the House Intelligence Committee. This includes the same 2015 and 2016 briefings that McConnell received. Nunes was also present when since-fired FBI Deputy Director Andrew McCabe told congressional leaders that the federal agency had opened a counterintelligence investigation into the president.

Instead of using the cues to provide oversight over the White House, Nunes spent his time leading the intelligence committee attacking the very notion that Russia meddled into the election at all. In July 2016, he claimed there was “no evidence, absolutely no evidence” that Russia would try to interfere in the upcoming election. Then, just a few months later, he contradicted himself, saying Russia interferes in elections “all over the world” and that we “shouldn’t panic” about it.

Nunes, who joined Trump’s transition team as an adviser days after the election, started casting doubt on the intelligence once again in December 2016, and he rejected calls for an expanded examination of Russian interference.

Since then, Nunes has referred to the Trump-Russia investigation as “McCarthyism revisited” and joined the White House’s efforts to knock down damaging news reports that linked Trump officials to Russian state agents.

As the intelligence committee chair, Nunes launched what was effectively a disinformation campaign against the notion that Russia interfered in the election. He had to temporarily recuse himself from the investigation after he tried to back up Trump’s false claim that former President Barack Obama ordered the FBI to wiretap Trump Tower and spy on Trump’s 2016 campaign. Nunes tried to present misleading information he received from the White House to further this lie.

He also tried to discredit the Mueller investigation last year by releasing the “Nunes Memo” that included classified information and claimed the Russian collusion allegations were a hoax. Nunes had to backtrack, and he later admitted he never read the material summarized in the memo, which actually said the Department of Justice believed there was a Russian spy on the Trump campaign.

Nunes was later caught on leaked audio in August 2018 saying that Republicans needed to keep a majority in the House during the 2018 midterms to protect Trump from Mueller. He also flew to London that same month on the taxpayers’ dime to gather intel on former British intelligence officer Christopher Steele (who authored the largely unverified Steele dossier that described ties between Trump and Russia) that he could use to discredit him and the Russia investigation.

Among the otherwise well-informed Republicans who’ve helped slow and stall investigations into Trump’s links with Russia, the most surprising may be Sen. Burr. Despite Burr’s supposed law-and-order bona fides — and the fact that he’s looked relatively centrist in comparison to some of the president’s more ardent supporters — a closer examination reveals how many times Burr has thwarted investigations, in stark contrast to the many times Burr has been briefed on the matter by the intelligence community.

in late 2016, then-CIA Director John Brennan said that he’d kept Burr, among other congressional leaders, fully informed of the intelligence community’s assessment of Russian interference. Those briefings included “the full details of our understanding of Russian attempts to interfere in the election,” Brennan later said.

That intelligence apparently mattered little to Burr. On Oct. 3, 2016 — months after WikiLeaks began publishing Democratic documents swiped by Russian hackers — Burr claimed that he hadn’t seen anything indicating that Russia was backing Trump. Four days later, Burr joined Trump’s team as a senior national security advisor. He joined the campaign the same day the Obama White House declared Russia was behind the DNC hack for the purpose of interfering in the U.S. election.

Since the election, Burr has gone out of his way to downplay links between Russia and the Trump campaign. In late 2017, Burr announced that by February, he would be ready to wrap up the Senate Intelligence Committee’s investigation into the links between Moscow and Trump. And even when damning new evidence of ties between the Trump campaign and Russian operatives comes up — such as the information that Trump campaign chair Paul Manafort met secretly with Russian agent Konstantin Kilimnik — Burr has insisted there’s nothing directly linking the Trump campaign to Russia.

In the immediate aftermath of the election, Ryan joined McConnell in rejecting calls for a wide-ranging look into Russian interference efforts. Instead, Ryan announced that any House probe would “have a narrow focus on cyber threats.”

As Trump assumed the presidency, Ryan’s efforts to sideline questions about the Trump campaign and Russia picked up pace. For instance, after Michael Flynn, Trump’s former national security advisor, resigned in disgrace after lying about his secret discussions with Russian officials, Ryan explicitly declined to back further investigation. A few months later, after Trump fired Comey — a decision Trump later admitted was due directly to the Russia investigation — Ryan steadily rejected calls to appoint a special prosecutor.

Ryan also refused time and time again to remove Nunes from his post on the House Intelligence Committee, despite Nunes’ conflicts and repeated efforts to upend the investigations. Through Nunes’ bizarre memo to his outright lies, Ryan stood by his GOP colleague.

Ryan’s replacement as the House’s top Republican has been just as unwilling to do anything about Nunes. After becoming House minority leader in 2018, Rep. Kevin McCarthy (R-CA) has kept Nunes as ranking member on the intelligence committee.

McCarthy famously suggested in 2016 that Russian President Vladimir Putin was paying Trump, speaking privately in front of a number of Republican officials — including Rep. Steve Scalise (R-LA). Not only has Scalise, currently the House whip, decried the Mueller investigation as a “witch hunt,” but he’s said as recently as January that there was “no collusion” whatsoever between Trump and Russia.

It’s a theme other Republicans have been happy to carry forward, time and again. But now that Democrats control the House, the country may finally start to see answers to long-standing questions about Trump and Russia come to light — and Republican efforts to stonewall investigations finally start to falter.