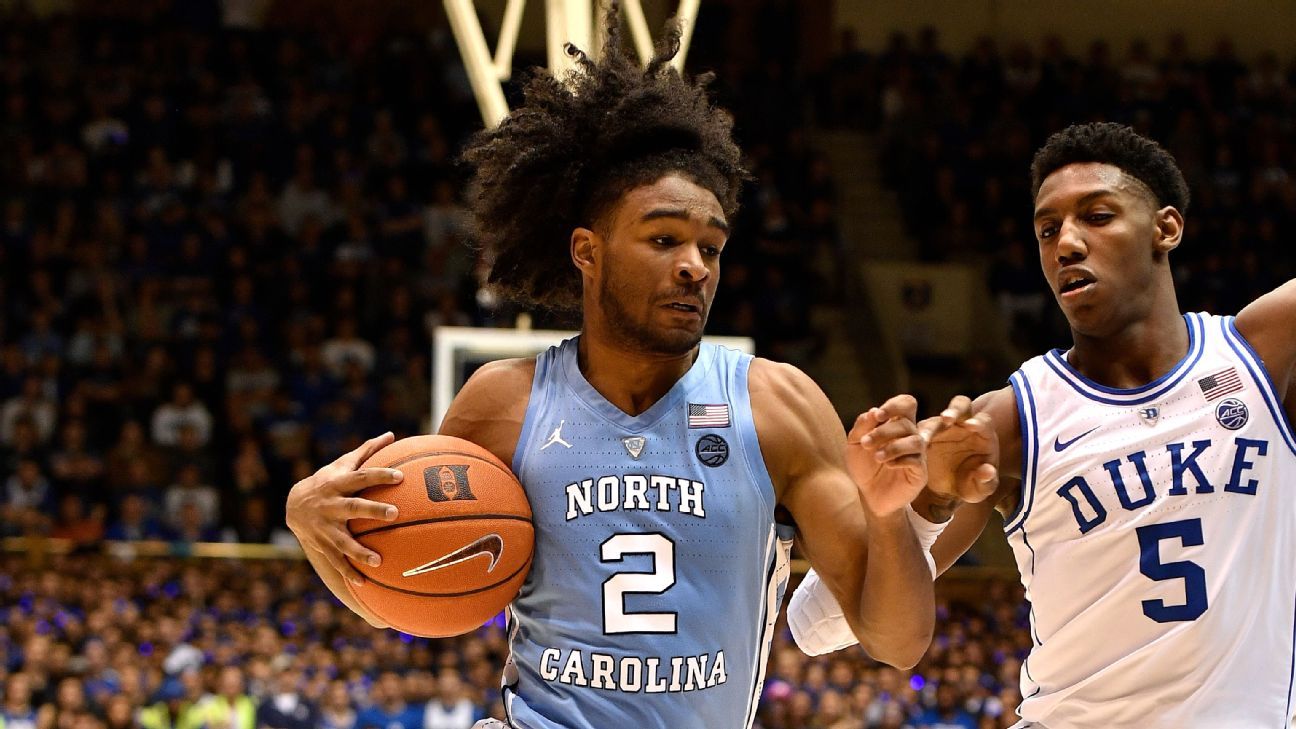 Duke and North Carolina have their second meeting of the 2018-19 season on Saturday (6 p.m. ET, ESPN), and ESPN.com’s team of college basketball experts weighed in on whether the possibly still-Zion-less Blue Devils would earn the split or fall victim to the sweep. Our experts also made their picks for the much-anticipated Michigan–Michigan State rematch (8 p.m. ET, ESPN) and told us what they expected to be the most compelling conference tourney of the season.

Jump to score predictions for the weekend’s top games

It’s Duke/North Carolina, Part II. Tell us how this is going to go if Zion Williamson plays … and if he doesn’t.

Jeff Borzello, college basketball insider: I’m not sure it matters on Saturday. I guess it’ll be closer if Zion suits up in Chapel Hill, but I think North Carolina wins either way. If he doesn’t play — and Mike Krzyzewski’s comments make that appear the likelier scenario — I think the Blue Devils are really going to struggle. They’re a thoroughly average team without Zion and one that got steamrollered by North Carolina in Durham just two weeks ago. The Tar Heels dominated Duke in the post behind Luke Maye, Cam Johnson and Garrison Brooks, and that seems likely to happen again. At the other end, Duke hasn’t gotten consistent offense from anyone not named RJ Barrett, which could be an issue against a team that loves to push the tempo and put up points.

Myron Medcalf, senior college basketball writer: Tough question. You can’t rely on the analytics for everything, but Duke without Williamson is a team that falls in love with the 3-pointer (42 percent of its attempts compared with 35 percent with Williamson available) and relies on Barrett’s straight-line drives. The Blue Devils are just easier to figure out and that’s what I think North Carolina will do (again) in a second win if Williamson doesn’t play because, as Jeff said, Duke isn’t really built to stop UNC in the paint without Williamson. If he plays, then Duke wins. Why? Because he’s the ultimate playmaker who fixes the flaws that were exposed (defense around the rim, post production, poor shot selection) in the first game.

John Gasaway, college basketball writer: This is going to go swimmingly for Duke if Zion plays. He changes the Blue Devils for the better on both offense and defense. That first part requires no further explanation, one surmises, but on D the freshman is a disruptor and a highly mobile wall of shot-changing menace. Fueled by Williamson’s return and, no less, by a desire to even the score after the game in Durham, Duke wins if Zion comes back. If not, this does not go well for the Blue Devils. Winning in Chapel Hill is a taller order than recording a home victory against Wake Forest.

Jordan Schultz, insider/analyst: Duke is winning this game, with or without Zion. As poorly as the Blue Devils played in a near upset loss to Wake, they still received tremendous production from Barrett, whose 28 points helped him pass Marvin Bagley III for most ever by a Duke freshman. Assuming Williamson can’t go, look for Coach K to once again run everything through Barrett, isolating him on the wings with flat sets that allow him to work out against a terrific Heels defense. We should expect more from the uber-talented Cam Reddish as well, who already hit Carolina for a career-high 27 points in Durham. If Zion does play, however, expect a heavy dose of post-ups and highlight-reel plays considering this will be the only time the prodigious future No. 1 pick ever plays in the Dean Dome. Either way, an angry Duke team wins what should be an excellent game.

And then immediately after, it’s Michigan vs. Michigan State from East Lansing. You expecting a Spartans sweep?

Medcalf: I just want to be there. The Breslin Center is just a wild place, especially when that bass player in the school’s band gets going. It’ll be crazy this weekend. And I think that will be the difference in a game that will feature two teams hoping to get healthier before the NCAA tournament arrives. I just don’t see Cassius Winston, who has been a hero and Wooden Award contender despite his ongoing bout with knee tendinitis, falling short in this season finale against his team’s chief rival. Ain’t happening. Michigan State gets the sweep.

Borzello: Man, this is a tough game to read. First, it doesn’t sound like either team is going to be healthy. Charles Matthews has missed two games in a row for Michigan, and John Beilein didn’t sound optimistic that Matthews would play on Saturday. For Sparty, Nick Ward is still hurt and Kyle Ahrens also missed the last game. Michigan State goes through stretches where it struggles to score due to its lack of options, and that theoretically will be magnified against an elite defensive unit like the Wolverines. That said, this is basically the same team that went into Ann Arbor — with Matthews playing 28 minutes — and beat Michigan by seven two weekends ago. In that one, it was all Winston. He had 27 points and eight assists and outplayed his counterpart, Zavier Simpson. I think that happens again and I think Michigan State gets the sweep.

Gasaway: Yes, the Spartans will sweep Michigan after going 0-2 against Indiana. How perfect is that? In the first game, Michigan State did what you’re not supposed to be able to do against the Wolverines. Tom Izzo’s guys attacked in the paint and it worked beautifully. No Big Ten opponent has scored as efficiently against Michigan as did the Spartans (1.23 points per possession), and no Big Ten opponent has shot anywhere near as well inside the arc (68 percent). True, Michigan State took better care of the ball than UM, which we can safely class as a true freak occurrence. Still, I like MSU’s chances in East Lansing.

Schultz: I do not. Michigan was uncharacteristically locked up by the rugged Spartans defense in Ann Arbor, going 7-26 (26.9 percent) from 3 while amassing just six total assists. True, Sparty is elite on both ends — top 10 in offensive and defensive efficiency, per KenPom — but the Wolverines have more firepower and once again will not have to worry about Ward, who continues to be sidelined with a fractured hand. The X factor for John Beilein & Co. is Matthews, if he plays. When he plays well and is confident shooting it, Michigan becomes much harder to guard, because Simpson and Jordan Poole are both deft at creating their own offense as well. Matthews — who went 1-8 with 4 points in the first MSU game — must discover his stroke in this one. I’m betting he will, and in turn, that the Maize and Blue steal a tight one on the road.

You are forced to watch every minute of one and only one 2019 conference tournament. Which one are you picking, and why? (Ivy League mini-tournament not allowed):

Borzello: No naps? I’m going to be at the Big East tournament, so I’ll leave that one out. If literally every second has to be watched, I think you have to avoid leagues with double byes. If you choose the ACC, you’re saying you want to watch Wake Forest or Georgia Tech or Pittsburgh twice in 24 hours. The Big Ten actually has interesting lower seeds, but still, no. The SEC has you grinding through two games involving Texas A&M or Missouri or something. Meh. I’ll go with the Big 12. There’s a ton at stake heading into Kansas City and fascinating storylines abound. Oklahoma, TCU and Texas all still have work to do to feel comfortable heading into Selection Sunday, so those opening-round games are interesting. Does Kansas bounce back after seeing its streak end on Tuesday night? Does Texas Tech stay hot? Can Iowa State stop losing? Will Kansas State start getting national respect? I’m all-in on the Big 12 next week.

Medcalf: Oh, man. Borzello’s pick makes sense. The Big 12 is always fun and it’s in Kansas City, where you can just walk across the street to the Power and Light District and party with Iowa State fans after the games. But I’ll take the SEC. I mean, Tom Crean in the opening round, where Georgia might score 98 points (win over Texas on Jan. 26) or 39 points (Wednesday loss to Missouri)? He might punt a basketball into the stands before halftime. Mizzou’s Jordan Geist taking 30 shots because why not? Can Billy Kennedy save his job? All of that before we even get to LSU, Kentucky and Tennessee? I’ll take it. I’d love to watch everything that happens at the SEC tournament, including Frank Martin and Bruce Pearl possibly pulling off upsets and giving us the best postgame interviews of the week.

Gasaway: Is this even up for discussion? Absolutely the Pac-12 tournament. One, no one in the conference not named “Washington” or, possibly, “Arizona State” (and even that second one is very iffy) is getting anywhere near the NCAA tournament without an automatic bid. These teams will all be playing like hungry carnivores, not like the “let’s just stay healthy” locks in certain other major conferences. Two, these completely off-bubble teams can, paradoxically win a game or possibly even two if they do get in the field of 68: Utah’s offense is excellent and the two Oregon teams are both playing quite well without anyone much noticing. Three, UW’s Matisse Thybulle is possibly Division I’s most entertaining player who’s also healthy. Last thing, 12-team tournaments feel like less of a slog on the first day than your true mega-leagues. I’d love to be there with my Maui Jim sunglasses celebrating the conference of champions.

Schultz: This is relatively easy for me, if hardly conventional, but I love the OVC, mainly because Belmont and Murray State each have All-America candidates. We all know about Racers all-world point guard Ja Morant, who is arguably the best player — and highlight — in the country, save for Mr. Williamson. But don’t sleep on Bruins senior hybrid forward Dylan Windler, a sterling offensive machine who can shoot it (43.2 percent 3s), make a play off the bounce and post up as well. Windler (21.1 PPG, 10.3 RPG, 2.5 APG, 1.4 SPG) is one of the most efficient all-around players in the nation and a legitimate pro prospect as well, as one NBA scout recently noted to me. To be sure, a Belmont-Murray State OVC final is the matchup we all deserve.

(Lines, published as they become available, from the Westgate Las Vegas SuperBook.)