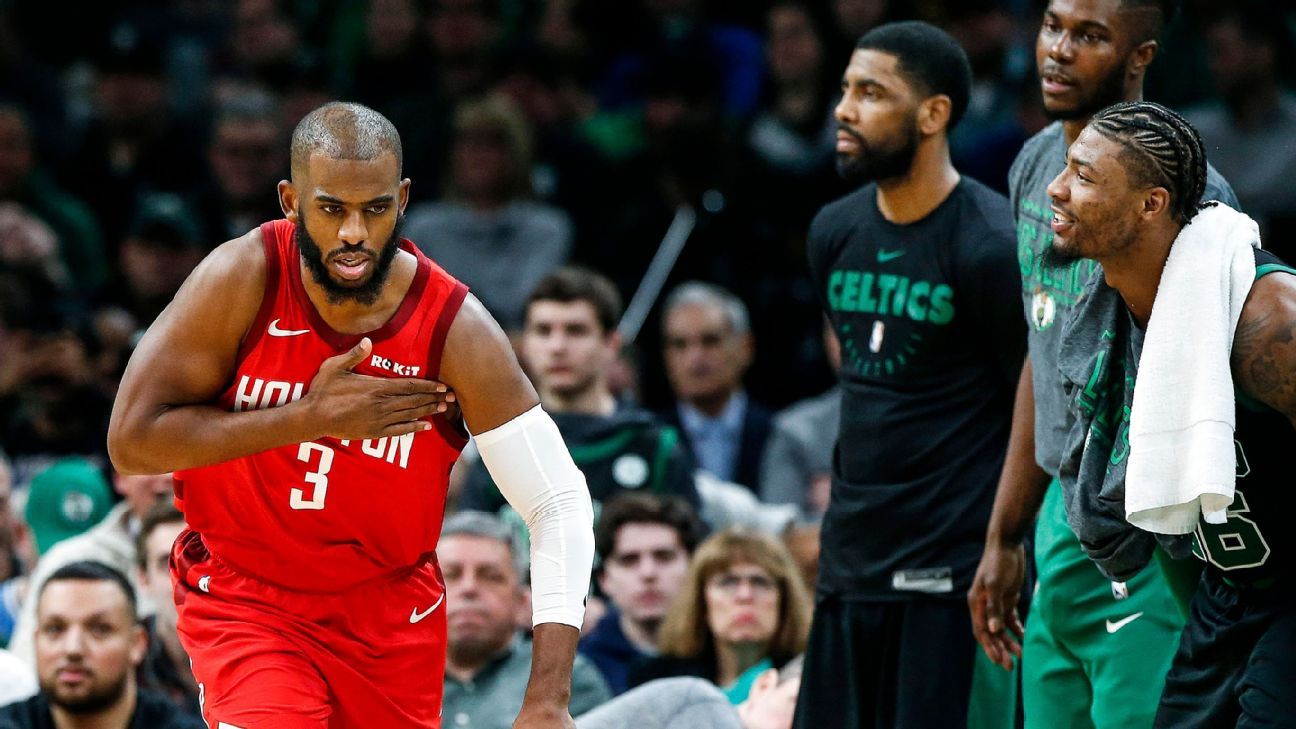 Austin Rivers had heard the rumblings about Chris Paul.

Rivers, who knows Paul’s game as well as anyone with the Houston Rockets after playing with him for three and a half seasons with the LA Clippers, didn’t see Houston much early in the season but acknowledged that “Everybody’s been saying [Paul was] just a little flat or whatever.”

“[But] since I’ve been here, he’s been pretty damn good,” says Rivers, a bargain signing for the Rockets in the buyout market right after Paul suffered a hamstring strain in December that caused him to miss 17 games.

“We play through James [Harden] and Chris. We trust those two. Honestly, I’m not just saying this, we still feel like Chris is one of the top-tier point guards in the league. When he’s on his A-game like he is now, there’s not too many point guards who are better than him.”

Paul holds the key to keeping Houston’s championship window open, as long as he can perform like the all-time great he has been throughout his 14-year career. But it closes if Paul’s play doesn’t merit his pay — he’s in Year 1 of a four-year, $160 million max deal — or if injuries force him off the court when the Rockets need him most. As if they needed any more reminders about the right hamstring strain he suffered with Houston holding a 3-2 lead in the Western Conference finals last season.

“Last year was last year. I can’t go back to that,” Paul says. “If I had a dollar for every time somebody said that — know what I mean?

Rockets general manager Daryl Morey knew the Rockets were taking a calculated risk by investing so heavily in a 33-year-old who has had health issues. But it was not a difficult decision for a franchise determined to maximize their odds of cashing in on Harden’s prime.

With Paul as the reigning MVP’s co-star, the Rockets have a legitimate chance to win a championship. That’s why they traded for him in the first place. Paul’s hamstring injury in large part prevented them from dethroning the Golden State Warriors dynasty last season, but the Rockets managed to make themselves mathematical favorites.

Those probabilities easily justify Paul’s paycheck in the MIT-educated mind of Houston’s GM.

“You have to factor everything in, but our window is now,” says Morey, whose future flexibility to improve the roster is severely limited with his superstars on max deals.

Rockets coach Mike D’Antoni has seen this situation play out before during his time coaching a certain two-time MVP with the Phoenix Suns.

“I saw Steve Nash do the same thing,” D’Antoni says when asked why he’s so optimistic about Paul’s future. “Dallas gave [Nash] up for dead, but they didn’t know his brains and how much he wanted it and how much he was willing to sacrifice his life to prepare himself to do it.

“As long as [Paul] has that, there’s no way he’s going to get dumber or whatever. … I’m telling you, he’s going to be right there with [the all-time great guards].”

Paul’s scoring (15.8 points per game) and field goal percentage (41.9) are at career-low levels, but there’s no doubt that he has been a dominant force despite inconsistent shooting during the Rockets’ recent surge. That trend tracks to even before the current six-game winning streak started with a road win over the Warriors, when Paul had 23 points and 17 assists to lead Houston to a victory without Harden.

“He looks like the Hall of Fame guy he’s always been. That’s what we need if we’re going to win this thing.”

Paul is averaging 16.6 points, 9.9 assists and 5.6 rebounds in the past 11 games, which coincides with his minutes restriction being lifted following his recovery from the late December hamstring strain that sidelined for 17 games. The Rockets’ second unit, with Paul running the show, is dominating opposing benches again like it did last season. His net rating during that stretch is plus-11.7 points per 100 possessions, by far the best of Houston’s starters.

Since Paul returned to the lineup on Jan. 27, the Rockets have an offensive efficiency of 117.1 when he is on the court and 106.4 when he is off the floor. And according to Second Spectrum, he has created 6.8 “wide open” looks per game for his teammates this season, most in the NBA (that number jumps to 7.4 since Jan. 27, which is also tops in the league during that span).

“He looks like the Hall of Fame guy he’s always been,” Morey says. “That’s what we need if we’re going to win this thing.”

But Paul did not look like the Hall of Fame guy he’s always been early this season. Scouts who saw the Rockets talked about how he struggled to get to his spots, even when big men were switched onto him, which was basically an automatic bucket the previous season. He didn’t have the same pop, the same juice, he had before.

“He looks old,” one scout said around the time the Rockets were at their lowest point, sitting near the bottom of the Western Conference standings and ranking as the NBA’s most disappointing team.

A frustrated Paul searched for solutions during his five weeks of recovery as Harden carried the Rockets with a historic offensive tear. Paul chose to part ways with Richard Williams, who was essentially his personal strength and conditioning coach, having come to Houston with Paul from Los Angeles. Under the guidance of the Rockets’ staff, Paul revamped his conditioning regime, although he’s vague on the details of the changes.

“I learned a lot of stuff about my body [during the injury],” Paul says. “And I’m just going to keep trying to implement different things and keep trying to get as strong as possible. I’m still not where I want to be eventually, but I feel like I’m in a great place right now.”

D’Antoni expresses complete confidence that Paul can continue starring deep into his 30s, much like high-IQ Hall of Fame point guards of the past such as Nash, John Stockton and Jason Kidd.

But one major difference between Paul and both Stockton and Kidd is that the men who rank first and second in NBA history in assists were remarkably durable deep into their careers. Stockton missed a total of 22 games in his 19 years, playing every game — only 50 during the 1998-99 lockout season — in 17 different seasons. When Kidd finally won a title at age 38 with the 2010-11 Dallas Mavericks, it marked the sixth straight year he played at least 80 games in the regular season.

“We’re not too worried about durability except in the playoffs,” Morey says. “The reality is you want a Hall of Fame-level guy available however much he is more than a guy who’s available all the time who’s not as good as him.”

Durability in the playoffs, of course, has been a problem for Paul. He missed the first two games of the second round in 2015 due to a hamstring strain suffered in the previous series, managing to score 27 points and hit the series-clinching shot in Game 7 against the San Antonio Spurs despite being hobbled. He broke a bone in his right hand in Game 4 of the 2016 first round, forced to watch as the Clippers lost the series in six games after taking a 2-1 lead. And then there was the hamstring strain that will always haunt Houston.

Rehashing that painful history is pointless for Paul, as relentless a competitor as there is in the NBA. His plan is simple: Keep putting in the work.

“One of the things I’ve always prided myself on is preparation,” Paul says. “Freak accidents happen or whatnot. Injuries, they come and go. But preparation is about discipline. I prepare myself every day, every day. If I prepare the way that I know that I’m supposed to, whatever happens, happens.”