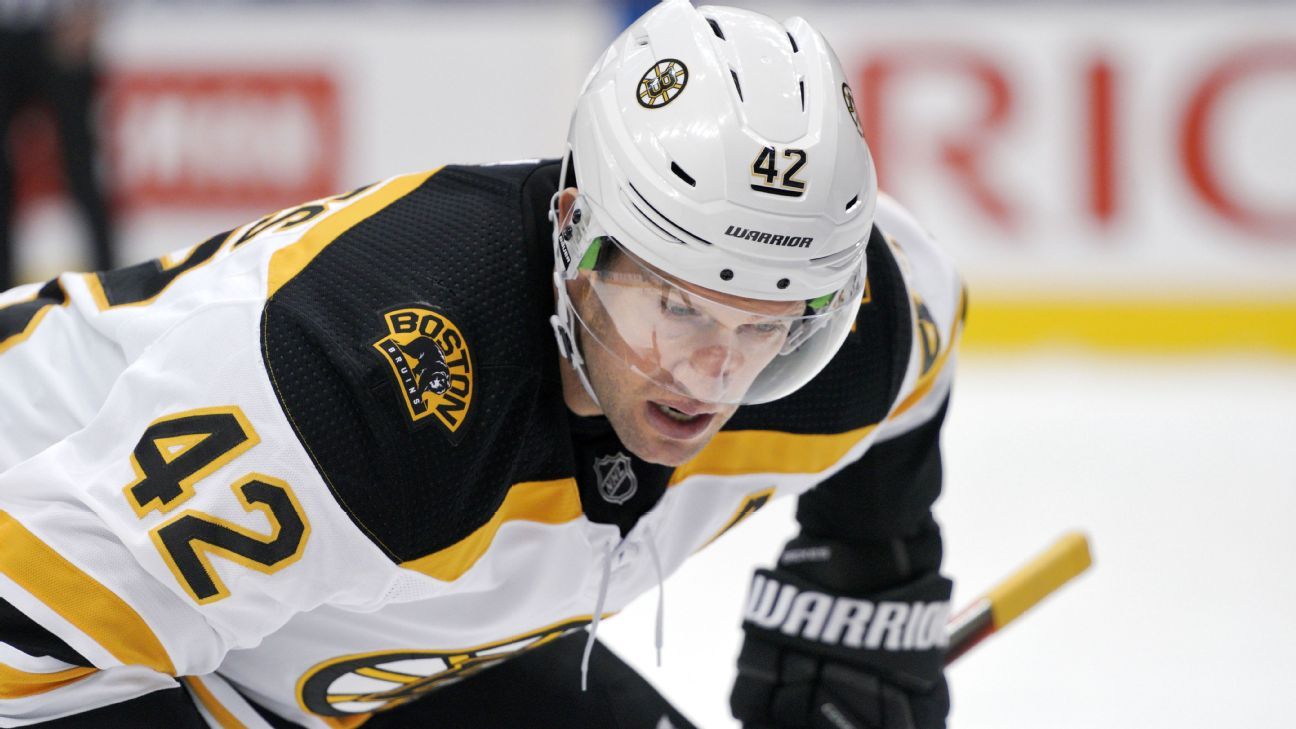 The climactic scene in Darren Aronofsky’s “The Wrestler” sees a past-his-prime grappler ascend to the top turnbuckle of the ring and fly, headfirst, down onto the mat below. He does this despite dire health warnings that another match could cause irreversible damage to his body, perhaps even resulting in a fatality. He does this out of obligation to his fans and his business, but most of all out of an unending desire to remain relevant no matter the consequences. It’s both exhilarating to see someone lay it on the line for what they love and horrifying that they feel compelled to do so.

I thought about that scene after David Backes of the Boston Bruins explained a recent change in his career trajectory, in which the 34-year-old center has become an enforcer of sorts, fighting Micheal Haley of the San Jose Sharks, Adam Erne of the Tampa Bay Lightning and Micheal Ferland of the Carolina Hurricanes in the span of a week.

“I don’t know if it’s an enforcer role. I think there are times during the season when you have to step up for your teammates. Whether there’s a liberty taken or a hard, clean hit, you have to hold them accountable. I asked [coach Bruce Cassidy] during a meeting [if] I could be put in roles to have a better impact on games, whether that’s with my gloves off or my gloves on. He’s provided me those opportunities,” Backes explained on Tuesday, after the Bruins’ win over Carolina. 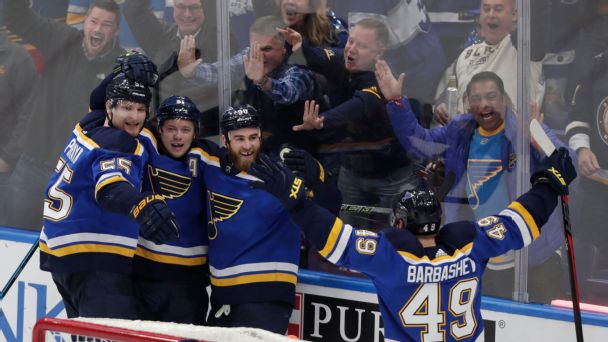 This week’s episode features two teams on the up-swing. First, Blues forward Ryan O’Reilly talks about the remarkable turnaround in St. Louis this season (12:20). Linda Cohn of adds her thoughts on the Blues, and Jordan “Winnington” (23:57). Plus, how was Greg’strip to Long Island for John Tavares’ return (29:16)? Then, we catch up with Vegas defenseman Shea Theadore, who talks about Year Two for the Golden Knights franchise (37:45). Listen »

“It’s a calculated decision. If I’m going to stay part of this team and part of a winning team, that’s maybe going to be part of my role. And I’m OK with it.”

Even a dozen years ago, these comments would have just floated by like spittle through the air after a left hook. Enforcers played their roles, and did so to maintain their ice time. Young players, from David Clarkson to Riley Cote, openly discussed getting their breaks in the NHL because they chose to break faces with their fists in the minor leagues, continuing a decades-long tradition of players literally fighting their way into pro hockey.

In 2019, a fight rouses the crowd while making many hockey fans feel squeamish. Fighting is a relic; a projection from HockeyFights.com earlier this season forecast that under 17 percent of games would have one; that number was 41.4 percent a decade ago.

Concussions are a reality, and especially for David Backes.

Since signing with the Bruins in 2016, Backes has suffered three concussions, on top of the ones he suffered playing a physical brand of hockey with the St. Louis Blues for 727 games. He was concussed during last year’s Stanley Cup playoffs against the Lightning. He was concussed early this season against the Edmonton Oilers, missing two games.

Does he have any concerns about taking on a quasi-enforcer role, given that history?

“My wife probably does,” Backes said this week. “But that can’t be a thought in your head when you’re playing in the NHL. She might worry about me driving over 65 miles an hour on the pike, too. Potential car accidents or whatever else that could come.”

Accidents will happen. Fights are voluntary. (That’s actually the rationale the NHL Department of Player Safety uses when suspending players for hits to the head during play but not hits to the head during a fight.) There’s no denying hockey was, is and always shall be an injurious game. The trick is to have rules and behaviors that reduce that risk. Being a 34-year-old who has suffered countless concussions and is increasing the frequency of fights would seem to increase it.

But here’s the thing with David Backes: He doesn’t have his head down on this stuff. Call his decision-making foolish, but know that he’s anything but a fool. Fighters in hockey have a way of explaining their craft and explaining away the deleterious effects of it, and Backes is no different.

“You look at the stats and you’re not actually as prone to concussions fighting as you are through whiplash or side hits or shoulders to the face or elbows to the face,” he said this week.

This is correct. A study of the NHL from 2009 to 2012 found that “a player was more likely to suffer a concussion by getting hit in the face by a puck than by fighting.” Adam Scorgie, a documentarian who made the film “Ice Guardians” about NHL enforcers, once told me that “the elephant in the room [is] only 5 percent of concussions are coming from fighting. But if you were a general observer of hockey or just an outside fan, you would think with all the media attention on fighting, ‘Oh, man, fighting’s gotta cause 40 to 50, 60 percent.'”

But again, in 2019 it feels unnecessary. The role of the enforcer is nearly extinct, with only a few dinosaurs still roaming Isla Nublar: Cody McLeod, Mark Borowiecki and Ryan Reaves among them. For Backes to take up the mantle seems antiquated and, within the context of his health, hazardous.

Backes, from back in November, on concussions: “You start piling them up, and it’s not ever fun when or if you have a concussion. But you start piling them up and trying to work through it, and if you’re multiplying them on top of each other, then it starts to get dangerous. … There’s a sensitivity level throughout the league and throughout the educated world that you don’t want to get hit in the head unnecessarily.”

Many will read that quote and wonder how it squares with Backes deciding to fight more, and it’s a legitimate query. There’s a certain sadness to the idea that, like a wrestler grappling well past his prime for one last match, a hockey player is willing to risk his latter years for the relevance of the moment.

But in both cases, that ignores the one salient point I return to when considering concussions, hockey, pro sports and the general risk involved in all of it, which is personal choice and the opportunity to make it.

Catch more than 180 NHL games streaming live this season on ESPN+. Click here for the upcoming schedule and to learn how to subscribe.

The NHL winkingly allows fighting, penalizing it but never going as far as to ban it. Part of this has always been to avoid the backlash from fans and players who would revolt against a draconian prohibition of fighting, and part of this is the confidence that it will organically leave the game. But as long as it exists, the choice is there to fight.

We can like it. We can loathe it. Some of us will choose to judge Backes fighting as the wrong decision for himself and his family. But as someone who openly cheered during another three-fight spree for David Backes in 2010 — when he started throwing fists with Team Canada players ahead of the Vancouver Olympics — I’m not that judge. The NHL I grew up with was a chaotic one, filled with gruesome brawls and players who only existed to partake in them. It’s part of my DNA as a fan. Yes, my views on fighting have changed — I never have to see another staged fight, but admittedly the ones that happen during the course of play get my adrenaline going — but I’d be lying if I said I didn’t miss it.

Backes grew up that that NHL, too, and he plays in an era where we all know more about concussions than we ever have before. Hence, Backes isn’t being forced into this role. He chose it. He isn’t forced into this sport. He chose it. Chose the risk, chose the reward. We can sit in judgement of him, but in 2019, if a player with his health history decides to journey down this path, it’s ultimately his choice, just as it was his former teammate Rick Nash‘s choice to end the journey earlier this season, lest there be any more damage to his brain. It’s always been his risk.

We watch, we applaud, we cringe, we hope for his good health after the skates are hung up. And we know, inherently, there’s always going to be someone else willing to leap off the top rope as long as the job requires it, or as long as fans are willing to pay to watch it.