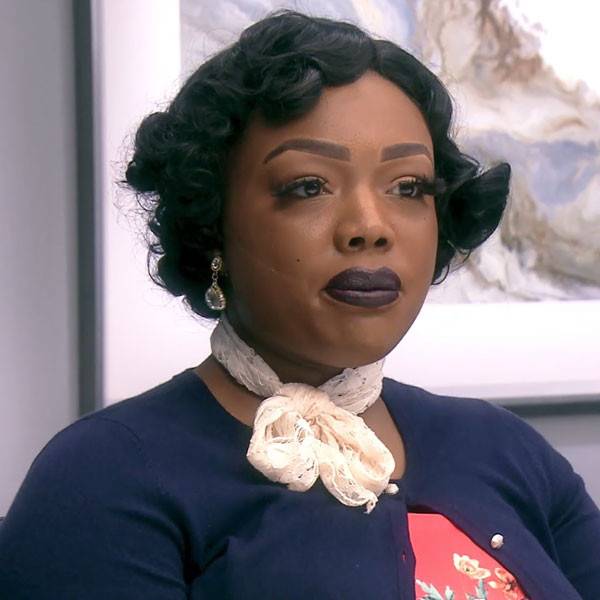 On Wednesday’s all-new Botched, mother of one Imani turned to Dr. Terry Dubrow and Dr. Paul Nassif after a previous procedure left her with butt implants which had minds of their own. Specifically, if Imani sat down “the wrong way” her butt implant would flip.

“I have a triple butt almost with these lumps you can see from the side profile,” Imani explained in a confessional. “There’s like an indentation and I want my butt to look nice.”

Despite being a plastic surgery enthusiast, Imani underestimated the toll butt implants would take on her body.

Being an avid cosplayer, Imani hoped the doctors would be able to fix the situation and give her a Wonder Woman-like shape. After presenting her case to the docs, Dr. Dubrow decided to take a closer look at the patient’s implants in the exam room.

“Buttock implants probably have the highest complication rate of any procedure,” Dubrow wisely stated to the Botched camera. “In my opinion, implants should be a choice of last resort.”

Nonetheless, Heather Dubrow‘s husband presented Imani with an extensive game plan on how to revise her bottom. While pitching his idea, Dubrow explained that the revision would likely require “a multi-stage series of procedures”…which could take two years.

Since Imani and her husband were hoping to have a child in the “very near future,” the cosplay participant chose to pass on surgery.

“I think it’s best for me to just go ahead and start the family,” Imani relayed later on. “But I do look forward to seeing Dr. Nassif and Dr. Dubrow couple years down the line.”

Even though Imani passed on the Botched doctors’ services, the plastic surgeons were kept busy thanks to two additional cases. First up, Florida resident Jennifer sought out the doctors’ expertise after a disastrous rhinoplasty left her with a “dinosaur” nose.

Per the new patient, a chronic snoring problem inspired the 40-year-old mom of two to seek out a medical fix. During a consultation with an ENT, Jennifer was advised to get a nose job.

A few months after surgery, Jennifer felt a “really hard, pea-sized bump” that had formed on the tip of her nose. Sadly, her medical woes didn’t stop there as the same doctor convinced the mother of two to get a revisional rhinoplasty—without anesthesia.

Of course, the Fort Lauderdale resident couldn’t go through with the procedure in its entirety. Thus, a few years and another failed surgery later, she hoped Drs. Nassif and Dubrow would be able to help her.

While examining Jennifer’s nose, Dr. Nassif noticed several factors that made her case a high-risk one.

Not only did her nose present as one that’s had almost 10 rhinoplasties, her tip cartilage had been “overdone”—meaning she could end up with dead skin after surgery.

Despite having had concerns about Jennifer’s sheet-like nose tissue, Nassif was able to give the patient an “aesthetically pleasing nose and a better airway.”

“Thanks to Dr. Nassif, the shape looks great,” Jennifer gushed to the camera. “I no longer have cartilage hanging from my nose and I’m no longer snoring.”

This wasn’t the only Botched success story as South Carolina resident Shaina also had a positive encounter with the doctors. Per Shaina, she sought out the doctors’ help since a bad boob job left her with “oversized Southern belles.”

Apparently, after struggling with her weight, Shaina made it her mission to “get healthy.” While she enjoyed her fit frame, she felt that her breasts were “small” and “saggy.” Thus, at 27 years old, she chose to undergo a breast augmentation.

Sadly, the procedure didn’t go according to plan as Shaina woke up to find that she had been given massive implants. Since Shaina’s breasts began to grow unevenly, she was later forced to get a revision…to no avail.

“I’ve had four surgeries altogether in a year and a half,” Shaina explained. “And they are still messed up.”

Even though Shaina had “like 8 major problems,” Dr. Dubrow signed on to the new patient’s revision. During surgery, Dubrow discovered that one of Shaina’s original implants had been placed upside down and sideways. Further complications arose when Dr. Dubrow had to make a new breast pocket for the Southern belle.

Thankfully, all of Dr. Dubrow’s hard work resulted in a pleasant final result for Shaina.

“After my surgery with Dr. Dubrow, I have two proper and perky breasts that no longer hurt,” Shaina concluded.

See everything that went down on this week’s episode in the recap video above!

Watch a new episode of Botched Wednesday at 9 p.m., only on E!