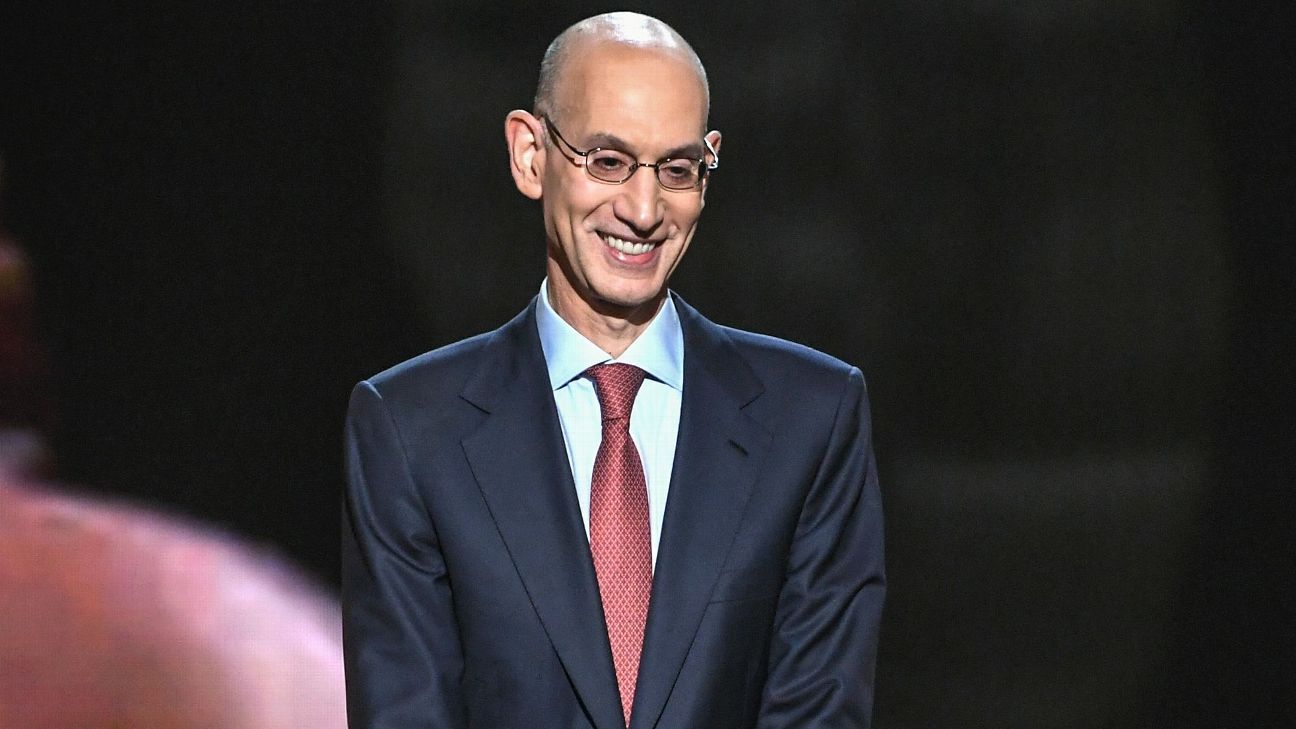 THE CONVERSATION NBA COMMISSIONER Adam Silver had with Bill Simmons last week in Boston was perhaps the most candid and personal of his tenure. It was a refreshing departure from standard public sessions, which are often filled with rose-colored and obfuscation-filled comments.

One month from his five-year anniversary in the job, Silver admitted that the NBA has some real challenges. He said the league has made some mistakes that have caused him to lose sleep. He hinted that he’s even re-evaluating what he wants his identity as commissioner to be.

There’s no crisis, per se. Anyone who runs an $8 billion worldwide operation is always going to be managing a full plate of problems. He was letting us into his world in a way I’ve never seen before, sharing his real thoughts and fears — or so it seems. And in a way, that showed both vulnerability and curiosity. It was wonderful.

Here are a few things he said and explained:

There are some real issues here. In addition to TV ratings, a midseason report that was recently distributed to teams showed that tickets sales are slightly down this season, according to sources. Overall ticket revenue is slightly up, but matched with the ratings trend, Silver has reason to be unsettled.

The Golden State Warriors make $3.4 million in gate revenue per game, best in the league. That’s not a surprise, as it’s a big market, and they’re the best team. But the New York Knicks, the league’s worst team, pull in an average of $2.9 million per game at the gate, sources said. Compared to the bottom of the list — the Memphis Grizzlies get less than $1 million per night — it shows the disparity.

This issue has been around as long as the league has. It’s why the Warriors and Knicks pay into a pool of money that gets transferred to low-revenue teams such as the Grizzlies. But as Silver says, the Grizzlies would always have a great challenge to truly compete even if they were able to land two or three superstars. If the Knicks got two superstars — and they’re trying — they’d be awash in cash like the Warriors.

That Silver is willing to discuss these topics is to be applauded. Since he became commissioner — Silver recently got a big raise and a six-year contract extension — he has focused a lot on revenue-generation.

He has negotiated a $24 billion TV rights deal, gotten a new, low-stress CBA done, brought in jersey ads and led the charge for legalizing sports betting while lobbying states to cut the league in on the deal.

There also have been player relations and transparency moves. He created last two-minute reports to make referee performance partially public. He has extended the All-Star break and regular season to build in extra rest and, at the request of LeBron James, made a rule that the team that wins the title gets to stay home for Christmas.

This version of Silver seemed so much different than the one who often answered questions pleasantly but somewhat dismissively — “We’ll take a fresh look at it” — over the years. There was real meat here, and those who were at the panel or watched it got a better understanding of the health of the sport.

Silver seemed to start going down this path with comments during All-Star Weekend, when he admitted that some “unintended consequences” had led to star trade demands.

Here’s hoping this continues. He seems to be spending a lot of his day worrying about how to get into the minds of millennials, be they players or fans. Being honest is a good way to start.

SEVERAL STREAKS MIGHT BE ENDING for LeBron James this season. His historic run of eight straight Finals and his streak of 13 straight playoff appearances look to be at an end. Another one might be in trouble: his 11-season streak of making first-team All-NBA, which is tied with Karl Malone for the longest in league history.

LeBron is making history, but the Lakers’ playoff hopes are fading fast. What’s next?

• LeBron passes Jordan on scoring list
• No time to celebrate as LeBron passes MJ
• Will LeBron ever pass Kareem?
• This Lakers season is a disaster

The competition for forward spots this season will be intense on the first team, specifically with MVP candidates Giannis Antetokounmpo and Paul George as strong contenders. Kevin Durant, who has made the first team six times, including last season, also figures to get votes.

After missing a career-high 18 games because of a groin injury and with the Lakers underwhelming, James, who was unanimously voted to All-NBA first team last season, might well slip. Kawhi Leonard, another contender for a spot, has missed 19 games because of injury or rest.

If James makes one of the three teams this season, it will tie the record for career All-NBA selections, at 15. Bryant, Kareem Abdul-Jabbar and Tim Duncan share that record. James has been a first-team selection 12 times and a second-team pick twice. The only time he didn’t make the team was his rookie season in 2003-04.

MIAMI HEAT PRESIDENT PAT RILEY has given a couple interviews over the past week indicating that he is pursuing a strategy of clearing two max salary slots in the summer of 2020. The Heat have cap space coming already in ’20 — currently, they’re in position to have more than $40 million, enough to sign one max player — but Riley made it sound as if he’s ready to dump some more salary to take a major swing.

Brian Windhorst and guests discuss the Warriors road trip, how they can best utilize DeMarcus Cousins and much more. Listen now!

The Knicks traded Kristaps Porzingis to clear cap space, and the Clippers traded Tobias Harris because they weren’t sure they’d re-sign him in the summer. The Heat don’t appear to have such a player whom they could use to dump salary and get picks and young players like the Knicks and Clippers did. However, they do have some attractive prospects, including Josh Richardson and Bam Adebayo.

The challenging contracts to move to get the Heat toward the two max slots would probably be Dion Waiters and James Johnson, who are scheduled to make $29 million between them in 2020-21.

The 2020 free-agent class isn’t as deep in stars as this summer’s group. But that year Anthony Davis is scheduled to be a free agent. There’s also the possibility that some of the big names this summer could consider taking short-term contracts that would have them back in the market a year later. If the Heat have cap space, they also become a spot where star players could force a trade.

Miami missed out on the past few major free agents it went for, namely Kevin Durant and Gordon Hayward. But the Heat, in the midst of a few middling seasons and stuck in salary-cap jail, could be classified as a sleeping giant. Riley’s plan to sign role players and combine them with guys developing in-house hasn’t worked out. Now, he wants back in on the star hunt.