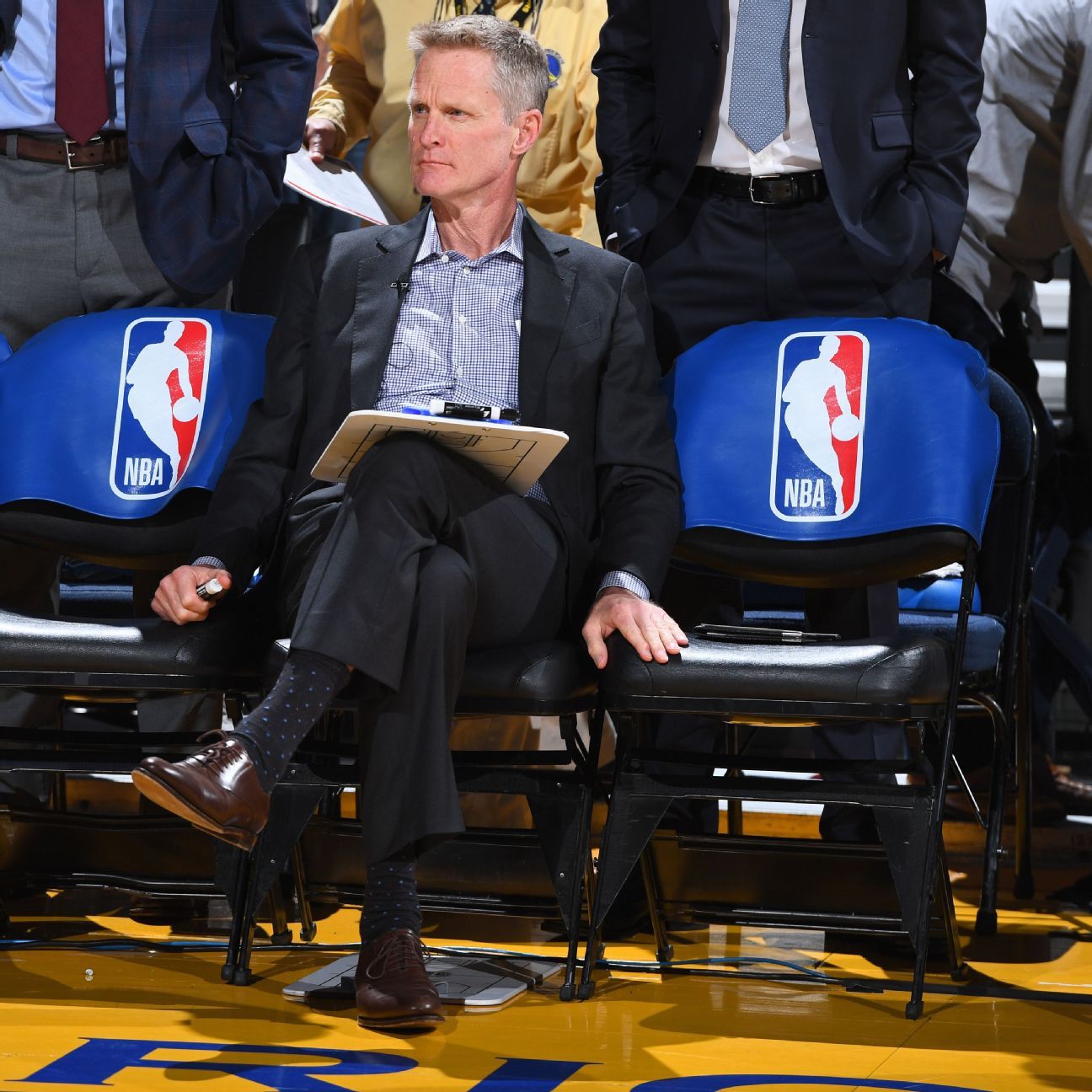 OAKLAND, Calif. — With just nine regular-season home games left at Oracle Arena, Golden State Warriors coach Steve Kerr is hoping his team can give East Bay fans a better send-off than what the group has shown to date. The Warriors come into Friday’s showdown against the Denver Nuggets in first place in the Western Conference with a 44-20 record, but they are just 23-9 at Oracle, a number Kerr hopes his team can improve upon down the stretch.

“We talked about this being our last season at Oracle, in Oakland, the very first night that we met back in September,” Kerr said after Thursday’s practice. “Our team dinner that we do every year before camp starts. It’s a big part of our theme. And we’ve let our fans down many times this year at home, particularly on nights that are big ones, against great teams, national TV [games]. So something we’ve discussed the last two days: What’s our purpose? Why are we doing this? I think we owe it to ourselves, we owe it to our fans, and particularly to our fans in Oakland, to give them our best stuff for the coming months. That’s been lacking and it’s disappointing, but we got a great opportunity ahead of us to close the season strong and to play well and deep into the playoffs, and it’s all right there for us.”

After 47 seasons playing inside Oracle Arena, the Warriors are scheduled to move into the sparkling new Chase Center in San Francisco in September. Since the beginning of training camp, Kerr has been open about the fact that he and his team want to close out the arena with not only a third straight NBA title, but with a strong showing each night for fans who won’t be able to attend Warriors games consistently once the team moves across the Bay Bridge. As far as protecting home court goes, Kerr and his team have not lived up to expectations so far this year. They have been blown out several times at home during national TV games, including Tuesday night’s 33-point defeat to the Boston Celtics, the worst home loss of the Kerr era.

As the Warriors get set for a Nuggets team that sits just one game behind them in the Western Conference standings, he is hopeful that his team rises to the challenge of putting on a better show for all the Oracle fans.

“We want home court [advantage],” Kerr said. “What I’ve talked about is health is always the number one priority and it will remain so but within that context we’re a game up on Denver. We’ve got two games left with them, both at home, and we got some hot teams behind them and some teams that are surging so it’s time — it’s time for us to turn it up, to lock in. We’ve had a good couple of practices the last two days, but that’s our goal: Finish strong and get home court in the West.”

Kerr’s message echoed what Warriors forward Draymond Green said after Wednesday’s practice in that the players want to wrap up home court in the Western Conference as one of their biggest goals in the short-term.

“We talked about it [Wednesday] in practice and our guys brought it up,” Kerr said. “It wasn’t something that I brought up, it was the players [who] brought it up and it’s a viable goal. I think part of the way we’ve approached the last two seasons as a staff and as an organization, as a team, is let’s put ourselves in position for the stretch run, knowing that the journey that we’ve been on for four or five years now is different now than it was the first couple years. It gets more difficult, the energy level that it takes to do what we’ve done. So that means we’ve had to pace ourselves somewhat these last two seasons and I think you can tell, sometimes the quality of play has slipped. But that’s over with.”

Kerr noted a conversation he had with Raymond Ridder, the team’s senior vice president of communications, as a reminder of where the season stands. With just 18 regular-season games remaining, the Warriors are hoping they’ll be able to break out of their malaise soon. They comes into Friday’s game having lost five of their last eight games.

“Raymond was just saying to me, ‘I can’t believe we’re almost at the playoffs,'” Kerr said. “It’s already March. It’s right. Everything’s right there. So that’s our focus now; it’s no longer about let’s get there, let’s find our way there over the long haul. It’s right here. So this is where we’ve got to tighten everything up over the next month and prepare ourselves physically and mentally for what’s coming, what’s ahead.”

In January, Kerr acknowledged being ‘sad’ each time he drove over the Bay Bridge to the remaining few games inside Oracle.

“It’s sad,” Kerr told ESPN. “It’s sad. Every day that I drive in I think about it. And obviously as the season goes we’re getting closer and closer. So it’s OK to be excited about the new arena and sad about leaving Oakland. That’s how I think everybody feels.”