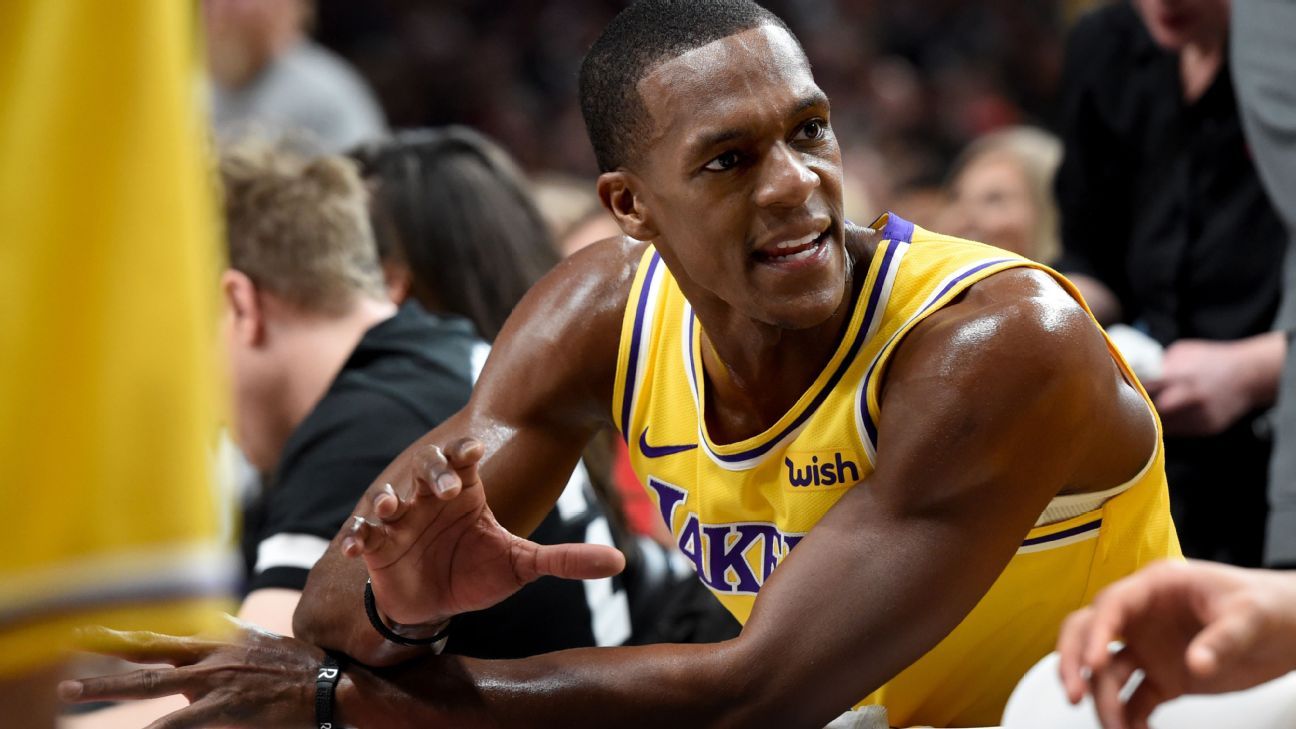 LOS ANGELES – Lakers point guard Rajon Rondo will not be fined or disciplined for sitting in a courtside seat removed from his teammates late in the Lakers’ 115-99 loss Wednesday to the Denver Nuggets, sources told ESPN.

Rondo met with Lakers president Magic Johnson and general manager Rob Pelinka on the team’s off day Thursday to discuss his seat choice and how it was perceived.

“They notified me that it was a league rule that you can’t sit there,” Rondo told ESPN. “I wasn’t aware of it. But now I know going forward where I need to be.”

Rondo estimated he sat in a seat separate from the bench “eight, 10 times this year” when speaking to reporters after the game.

“I’ve done it (before),” he said. “I’ve sat everywhere but the bench more than 40 seconds. But I guess when things aren’t going well you can kind of continue to make up stories. But I never thought it was a big deal. I was just in my head contemplating the game. That’s kind of what I do. I don’t think I have to explain myself as far as my relationship with the team, the players and the coaches. That shouldn’t even be discussed.”

Rondo played 16 minutes in the second half against Denver compared to 17 minutes for the Lakers’ two-way contract player Alex Caruso. Rondo pushed back on the assumption that his seat had anything to do with being upset over playing time.

“I still don’t understand why we’re talking about it but we are,” Rondo said. “A.C. and those guys did a hell of a job playing. I broke down film for two hours last night. I mean, I don’t know what people want. After a loss, I’m still trying to figure it out. But it is what it is. People are going to say what they say.”

Rondo, a 13-year veteran, four-time All-Star and one-time champion as a member of the Boston Celtics, shrugged off any talk of him deserving a fine.

“Everyone has an opinion,” Rondo said. “I’m not controlled by money … I can’t control what they say. If somebody wants to fine me, I won’t wake up tomorrow upset about it.”

The Lakers are currently in 11th place in the Western Conference, 6.5 games behind the Los Angeles Clippers for the eighth and final playoff spot with 17 games left to play.

“Just continue to be a pro,” Rondo said of closing out the season. “I’m a competitive guy. I don’t like to lose in cards, Connect 4 or Uno. So, I want to win as many games as possible. This is part of it.

“We’re in a situation that nobody thought we’d be in at the beginning of the year. But it is what it is. There’s a lot of things to get better at individually and as a team so, I don’t think and I believe that we’re definitely not going to just lay down the rest of the year. We’re going to play guys that want to play, we’re going to play the right way and play with pride.”