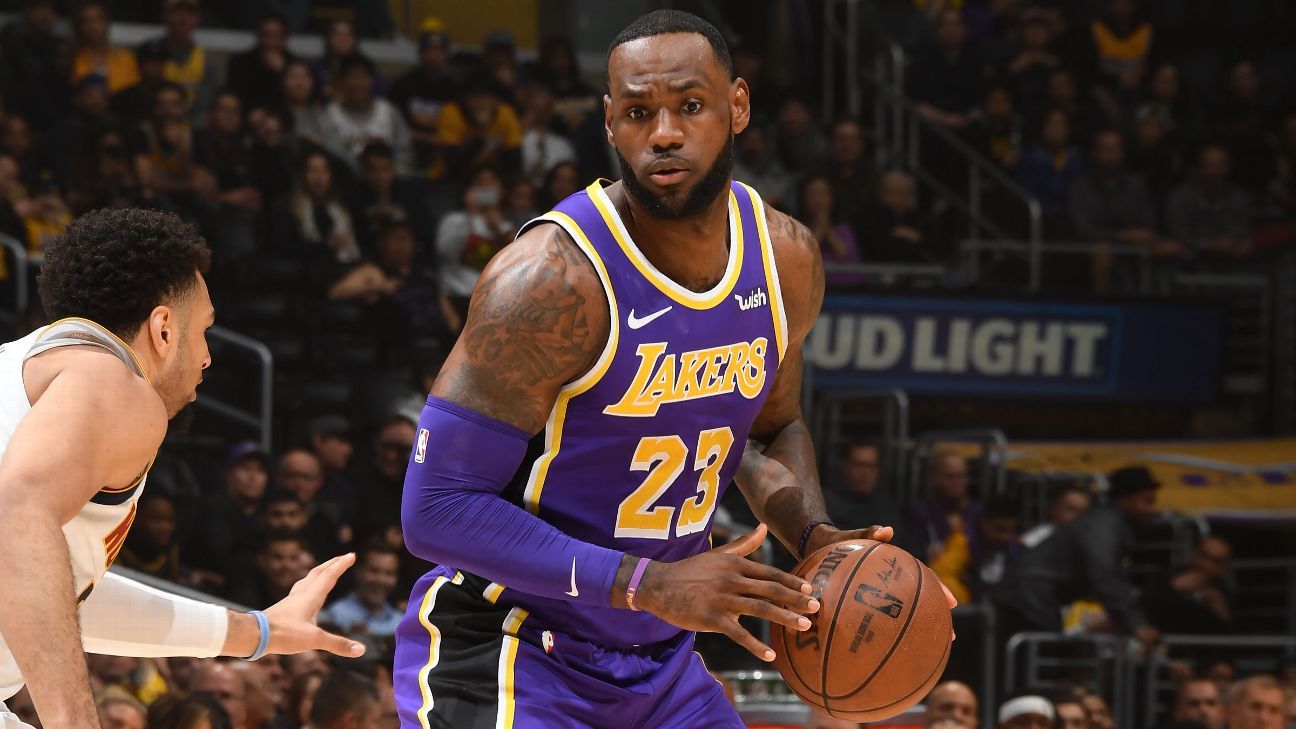 IT WAS SPRING 2017, and LeBron James passed Michael Jordan in scoring.

It was a triumphant night, the Cleveland Cavaliers closing out the Boston Celtics in the Eastern Conference finals to head back to defend their title. A 3-pointer in the third quarter got James beyond Jordan’s career playoff scoring record of 5,987 points. A testament to excellence and longevity.

The Lakers’ playoff hopes are fading fast. What’s next?

• LeBron passes Jordan on scoring list
• No time to celebrate as LeBron passes MJ
• Will LeBron ever pass Kareem?
• GOAT talk: LeBron, MJ in their own words
• This Lakers season is a disaster
• LeBron won’t sit with playoffs fading
• Lakers, Melo press pause on talks

Teammate Kyrie Irving, who would play only five more games with James before demanding a trade to get away from him, approached James on the bench after the accomplishment, whispering congratulations in his ear and encouraging him to celebrate the moment.

“I did pretty much everything that MJ did when I was a kid,” James said that night, relishing the record. “I shot fadeaways before I should have. I wore a leg sleeve on my leg and folded it down so you saw the red part. I wore black and red shoes with white socks. I wore short shorts so you could see my undershorts underneath. I didn’t go bald like Mike, but I’m getting there.”

IT WAS SPRING 2018, and LeBron James passed Michael Jordan in scoring.

It was a triumphant night, the Cavs beating the New Orleans Pelicans in a game that helped secure their playoff seed. It was James’ 867th consecutive game in double figures, breaking Jordan’s all-time record. A testament to excellence and longevity.

The referees came to him during a stoppage in play and handed him the ball, which he held over his head while the crowd gave him a standing ovation. On the slam dunk that officially set the record, Kevin Love, James’ remaining All-Star teammate, gave a double fist pump and embraced him as James ran up the floor. Justin Timberlake high-fived him from a courtside seat.

“That’s a good moment, a special moment not only for myself, but for my family and for so many kids that look up to me for inspiration to know that you can actually go out there and do it and know where I’ve come from,” James said that night. “You know, brought up 30 minutes south of here, and the statistics is always stacked up against you, and for me to be in this position today, being able to accomplish something that a lot of people thought would not happen again or be able to break a record like that.”

IT’S NEARLY SPRING OF 2019, and LeBron James has passed Michael Jordan in scoring.

He needed 13 points against the Nuggets Wednesday night to pass Jordan for fourth on the all-time scoring list with 32,292 points. It’s a testament to excellence and longevity again. James scored his milestone points on an and-1 driving basket midway through the second quarter.

James will be humbled by this, as he has by all these Jordan scoring marks. Moving alongside Jordan in any category is an honor, though it must be pointed out James has played more than 100 more regular-season games than Jordan did to reach this number. It is an accomplishment James owes to tremendous focus on both physical and mental well-being that has enabled him to operate at such a high level for 16 seasons. Jordan, who had two comebacks from retirement, played 15 total seasons.

But the celebration for this particular Jordan scoring record is probably going to be muted. There isn’t much that is triumphant for James about this season, one in which he’s in danger of missing the playoffs for the first time in 14 years. And a big reason is because there isn’t another All-Star for him to celebrate this honor with.

Last week, after the Lakers lost to the Milwaukee Bucks in a game in which James led a valiant but ultimately fruitless effort, he said something that essentially summed up the season.

“Everybody tends to talk about Giannis [Antetokounmpo] so much, but it’s the supporting cast that he has, those guys go out and do their job every single night,” James said. “Obviously, [Eric Bledsoe] … then [Khris] Middleton being an All-Star, [Malcolm] Brogdon being a former Rookie of the Year, they’ve surrounded Giannis with a great cast.”

This season is the first time since 2009-10 that James hasn’t played with another All-Star. Most of those seasons — be it Love, Irving, Dwyane Wade or Chris Bosh — he played with two.

Passing Jordan in a scoring mark should never be taken for granted; it’s a moment. There will be another game ball to be displayed in a LeBron James museum someday. But this Lakers team isn’t getting him toward the Jordan record he’d really like: the six titles.

James has mostly given up that pursuit. He feels his legacy is set, regardless of what the public debate on the matter might be. Not that he wants to stop trying.

Just a few weeks ago, he articulated this when he said: “There’s nothing I need to get in this league that I don’t already have. Everything else for me is just like icing on the cake … there’s nothing I’m chasing or feel like I need to end my career on.”

Right now, the idea of chasing anything personal is on the back burner. James is spending his days chasing the No. 8 seed. Scoring records — Kobe Bryant at No. 3 is up next and attainable by next season, assuming good health, and overall leader Kareem Abdul-Jabbar would take four to five more great years — have faded in importance for the moment.

If there is a final word on the matter, James has never wanted to be known as a scorer. He would much rather be known as a passer. And if they ever do put a statue in Cleveland, he’d like it to be of his greatest career moment: a blocked shot in Game 7 of the 2016 Finals.

So passing Jordan yet again has become a nice spring ritual but not a life pursuit.

“I don’t have to score the ball to make an impact in the basketball game. That was my mindset when I started playing the game,” James said last year. “And it’s going to carry me for the rest of my career.”