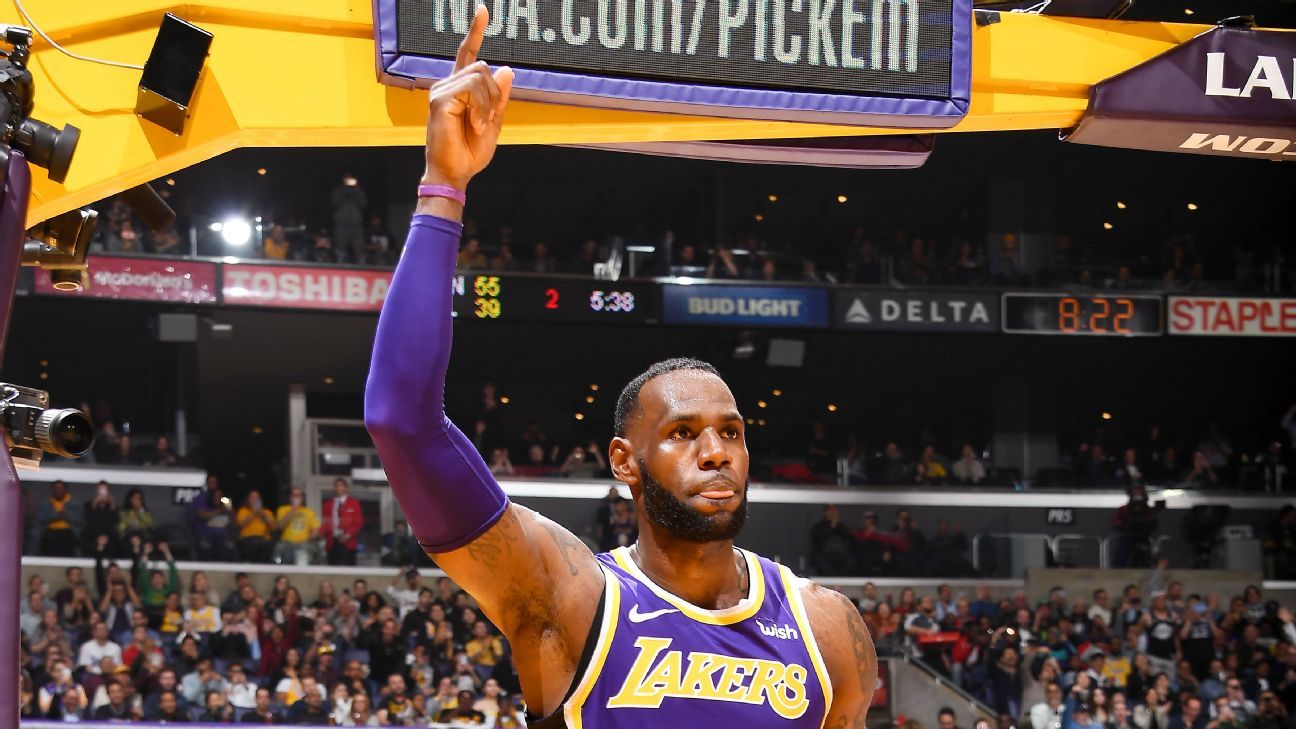 LOS ANGELES — LeBron James says his first encounter with Michael Jordan was like meeting God. Now, he is a spot above him in the scoring heavens. James passed Jordan on Wednesday night to move into fourth place on the NBA’s all-time points list.

Entering the Lakers‘ game against the Denver Nuggets trailing Jordan by 12 points, James tied Jordan at 32,292 career points with a fadeaway 19-footer midway through the second quarter, then passed him with an and-1 layup at the 5:38 mark.

James sank the free throw to complete the three-point play and went on to finish the game with 31 points, putting him at 32,311 for his career. The Lakers lost 115-99.

“Of all the stuff I’ve done in my career, this ranks right up there at the top with winning a championship,” James said. “For a kid from Akron, Ohio, that needed inspiration and needed some type of positive influence, MJ was that guy for me. I watched him from afar, wanted to be like MJ, wanted to shoot fadeaways like MJ, wanted to stick my tongue out on dunks like MJ, wanted to wear my sneakers like MJ. I wanted kids to look up to me at some point like MJ and it’s just crazy, to be honest. It’s beyond crazy.”

In anticipation of the scoring feat, James tweeted before Wednesday’s game that moving past Jordan would be “unreal.” He also wore a pair of Nike LeBron 16s designed in the style of the Air Jordan III “white cement” model. He wrote “Thank you M.J. 23” on the side of one of the sneakers.

Can’t even front. This is going to be UNREAL!! Wow man

“I kind of take all accomplishments as they come, and anytime I’m in the breath of any of the greats and, obviously, MJ being the guy I looked up to my whole life, a guy I aspired to be when I was a kid and just, I think it’s going to be pretty cool,” James said at shootaround Wednesday morning.

“I don’t know how I’ll react in the moment, obviously, but I think at some point I’ll be able to appreciate it, just knowing where I come from and knowing that it’s so much bigger than just me.”

He reacted to the moment by hiding his face under a towel on the bench as he was swept up in emotion while the video board at Staples Center played a tribute highlighting the notable buckets of his storied career, such as his 10,000th point and 20,000th point.

“Me and my best friends this is all we talked about was MJ. All we talked about was MJ. Outdoor courts, we used to play outdoor ball and you know in the snow in the rain in northeast Ohio and we all wanted to be MJ. We all wanted to be MJ, every last one of us. It’s crazy. My high school best friends, they text me and they just can’t believe it, I can’t believe it, because we just remember walking up and down the Akron streets with a basketball, singing, ‘I wanna be, I wanna be like Mike.'”

James, 34, who was drafted by the Cleveland Cavaliers with the No. 1 pick in 2003 a couple of months after Jordan retired from the Washington Wizards at age 40, needed 118 more regular-season games than Jordan to reach the same scoring plateau. Yet, while Jordan has James beat in career scoring average (30.1 points per game to 27.1), James is ahead of Jordan in both rebounds (7.4 to 6.2) and assists (7.2 to 5.3). James, it should be noted, also reached the scoring mark on 1,240 fewer field goal attempts than Jordan.

After passing Michael Jordan, LeBron James breaks down what MJ means to him, meeting him for the first time and how he hopes to “inspire the next kid.”

“Obviously, it’s an incredible achievement,” Lakers forward Kyle Kuzma said. “Getting into the top four, approaching three, he’s going to pass three and probably get into the top two, it’s crazy to really think about.”

James passed Andre Miller for 10th on the all-time assists list earlier this season, making him the only player in league history to rank in the top 10 in both points and assists.

James passed Jordan for first in all-time playoff points in the spring of 2017 — although he still trails Jordan 6-3 in championships. The occasion allowed James a chance to reflect on Jordan’s influence.

“I did pretty much everything that MJ did when I was a kid,” James said at the time. “I shot fadeaways before I should have. I wore a leg sleeve on my leg and folded it down so you saw the red part. I wore black and red shoes with white socks. I wore short shorts so you could see my undershorts underneath. I didn’t go bald like Mike, but I’m getting there.”

James and Jordan do not have much of a relationship to speak of.

“Even with the relationship not being as you would want it as you’re growing up, obviously, at the end of the day what he was able to do on the floor and off the floor throughout his playing days inspired a kid from Akron, Ohio, so that is more than enough of a relationship because he helped me feel like I could be something beyond this world as well,” James told ESPN.

Part of the disconnect between them has revolved around the conversation of greatest player of all time. James, on an episode of the ESPN+ series “More Than An Athlete,” said that leading the Cavs to their first title while becoming the only team in league history to overcome a 3-1 deficit in the NBA Finals to beat the Golden State Warriors in 2016 solidified his perch at the very top.

“That one right there made me the greatest player of all time,” James said.

Jordan, for his part, rejected the notion that he earned that title.

“What everybody is saying I am, I never had the chance to compete against other legends that was prior to me,” Jordan said years ago in an interview with ESPN’s Michael Wilbon. “I would love to have played against them, but I never did. For you to say that I’m better than him, I mean it’s your opinion. It’s their opinion. I accept that as their opinion. If you ask me, I would never say that I’m the greatest player.”

Jordan had no problem, however, offering his opinion of where James ranked as compared to Bryant, in comments made in August 2017 at his Flight School summer camp in Santa Barbara, California.

“Would I rank LeBron over Kobe in terms of best all time? No,” Jordan said. “There’s something about five that beats three. Now, he may be better than that, but Kobe won five championships. LeBron won three.”

While the Jordan-James debate will surely rage on for decades, James has earned the respect of his contemporaries, regardless of rankings.

“LeBron is such a great overall player that sometimes he gets overlooked as a scorer, as crazy as that is,” Dirk Nowitzki, the league’s No. 7 all-time scorer, told ESPN. “Sometimes his scoring, his clutch scoring even, is overlooked. But I think all the players know how good he is. He’s basically a one-man fast break. All these years, if you have one man back, it’s basically a basket.”

James said he received phone messages after Wednesday’s game from his high school teammates who once shared in his emulation of Jordan. They’ve seen him turn an idol into a peer in the game’s all-time pantheon.

“I mean, just listen, man. I always tell you guys, when you’re an inner city kid from Akron, Ohio, like myself and my guys growing up, you look for anything, any lightning in a bottle that can inspire you, because you’re put up against the numbers of failing,” James said. “The percentages of guys like myself — single-parent household, only child, underprivileged — making it out, it’s not high at all. And MJ had a lot to do with me making it out, along with my mother, along with the city itself, along with the little league coaches I had. But Mike had no idea what he was doing for a kid that was growing a 45-minute flight from Chicago when he was putting in that work.