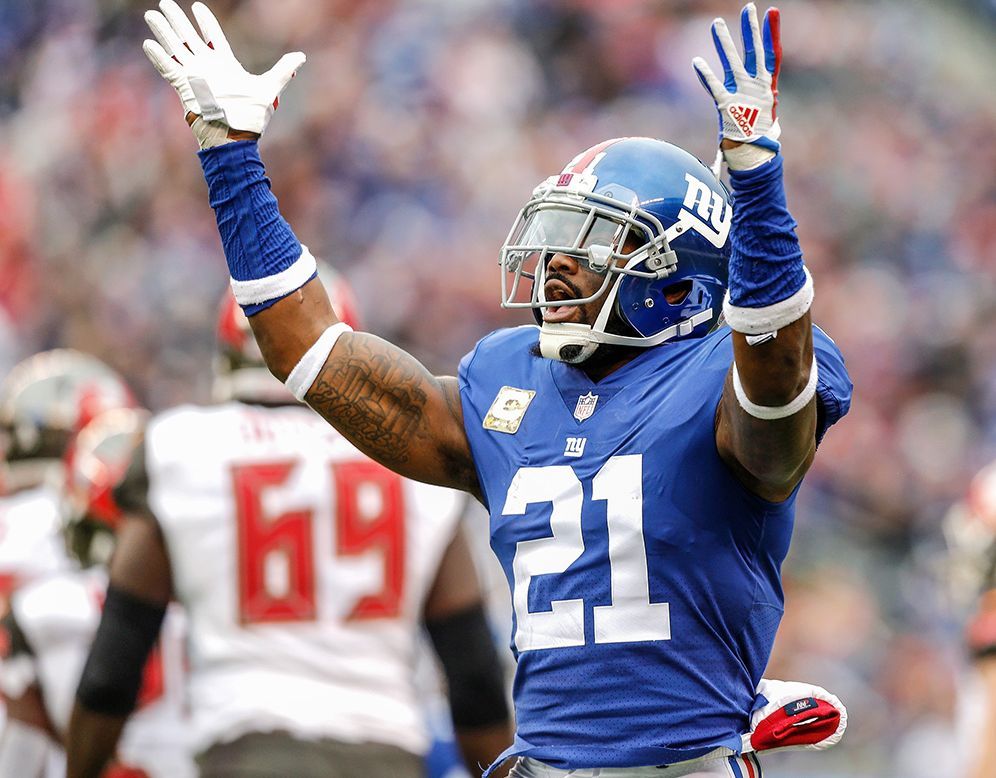 NFL free agency is a little more than a week away, which means it’s time for teams to tell a handful of disappointed players that they won’t be free agents after all. Yes, Tuesday at 4 p.m. ET was the deadline for teams to designate franchise players for 2019.

Quick refresher: A team can select one of its own prospective free-agent players per year as its franchise player. Doing so locks that player onto the roster for one year at a fully guaranteed salary roughly equal to the average of the top five salaries at his position or 120 percent of his previous year’s salary, whichever is higher. There’s more to it, but those are the basics in case you’re new here and just clicking on stories by writers you consider especially handsome and intelligent.

This year, six teams used the franchise tag to hold top players off the open market:

Those teams have until July 15 to work out long-term deals with those players, or else they can’t negotiate with them again until after the 2019 season. Some of those tagged could get long-term deals. (Technically, all of them could.) Some likely won’t. But the franchise-tag deadline is always a useful marker on the NFL’s offseason calendar, and it’s worth taking a look at who came out ahead and who came out disappointed.

Collins let it be known last month that he’d cleaned out his locker at the New York Giants‘ team facility. This was the safety’s version of a not-uncommon ploy by a player with little to no leverage who doesn’t want to be franchised:

Hey, front office. Franchise me if you want, but I promise I’m going to be difficult about it.

This doesn’t work on most teams, but the Giants aren’t most teams, and lo and behold they gave Collins what he wanted. They elected not to use the $11.15 million tag on Collins, who now will be a free agent when the new league year opens next week. At age 25, with a strong reputation as a hard worker and locker room leader plus three Pro Bowl appearances and one first-team All-Pro selection under his belt, he should have a deep market of interested teams and end up with more than he’d have made on the tag.

It’s not just that the New England Patriots elected not to use the franchise tag on Flowers, it’s that Lawrence, Clark, Clowney and Ford all did get franchised, leaving the unfranchised Flowers as the top free-agent defensive end on the market.

Even in a year in which the draft is loaded with defensive-line prospects, players who can disrupt things at the line of scrimmage and get after the quarterback are in demand, and Flowers should do well. He turns 26 in August, plays every position on the defensive line and has won the Super Bowl twice. Don’t be surprised to see him get a deal worth more than $16 million per year.

The Philadelphia Eagles‘ decision not to franchise quarterback Nick Foles landed the former Super Bowl MVP in the Jaguars’ laps. Once the free-agent market opens next week, the Jags are expected to sign Foles to a multiyear contract and make him their starter.

One reason it appears he’ll end up with Jacksonville is that there weren’t that many other potential landing spots. Once the Eagles decided to set him free, the Jags were in an outstanding position to land the top available quarterback on the market without having to win a bidding war with a bunch of other teams to do so.

Even if the Cowboys don’t sign Lawrence to a long-term deal (which they have said they very much want to and are optimistic that they will), no one’s sitting prettier than he is this time next year. A second year playing on the tag would mean he’d have made a total of $37.7146 million over two seasons (2018-19), fully guaranteed, and tagging him a third time in 2020 would cost the Cowboys nearly $25 million.

Assuming Lawrence stays healthy, he’d be the defensive-end version of Kirk Cousins. I also still think he, Dak Prescott and Amari Cooper end up with top-of-the-market extensions from the Cowboys in the next couple of months.

Cowboys DE DeMarcus Lawrence refuses to show up to OTAs and the Cowboys’ offseason program until his contract issue is resolved.

The Tampa Bay Buccaneers didn’t franchise left tackle Donovan Smith because they didn’t have to. Smith and the Bucs were able to agree on a three-year, $41.5 million contract extension before the franchise deadline hit.

So not only does Winston, the Bucs’ quarterback, have his left tackle back for this season, he’s got Smith back and happy. We don’t know what will become of Winston as he embarks up on the final year of his contract, but if he’s to live up to his top-draft-pick status and his potential, he’ll need his protection to be as good as it can be. Smith might not be the greatest left tackle in the league, but he’s a lot better than what would have been available to the Bucs if they’d had to replace him.

This is the flip side of the earlier Collins blurb. Even for an organization that keeps stacking bad decisions on bad decisions (and losing seasons on losing seasons), the decision to let Collins leave over $11.15 million — the franchise number for safeties this year — and without getting anything in return except maybe a 2020 compensatory pick is baffling.

I have heard the Giants’ reasoning, and you’ll read and hear plenty of their spin in the coming weeks and months. He’s not great in one-on-one pass coverage, general manager Dave Gettleman believes in spending on the lines and not the secondary, they were worried he’d hold out of camp and make a stink, blah, blah, blah. None of it trumps the Ernie Accorsi mantra to which Gettleman selectively claims to adhere: “You don’t quit on talent.” I’ll expand that to, “You don’t quit on talented 25-year-old playmakers who are locker room leaders and fan favorites.”

The Giants were 24th in total defense last season and just let their best defensive player walk out of the building without even a whiff of an effort to keep him. If they’re rebuilding, they’re doing it a year too late (and should have traded him for something last October). And even if they’re rebuilding, Collins is the kind of player they can build around. But hey, you don’t miss the playoffs six out of the past seven seasons by making great offseason decisions, do you?

Dan Graziano breaks down the Texans’ decision to place the franchise tag on Jadeveon Clowney.

Based on the conversations I’ve had with people in the league, I believe Clowney is the least likely of the franchised pass-rushers to sign a long-term deal this offseason. The Texans might view him as a one-year rental at this point, and the franchise-tag system isn’t being fair to him, either.

Because the Texans run a 3-4 defense, Clowney technically lines up more often as an outside linebacker than an on-the-line defensive end. The franchise number for linebackers is $15.443 million, whereas it’s $17.128 million for defensive ends. Clowney gets a little bit of a break because the Texans gave him a $1 million raise last year over his fifth-year option price, so his franchise tag is $15.9672 million — 120 percent of last year’s salary. But it’s still not commensurate with the job he actually does.

The NFL really does need to change the franchise-tag designations to reflect actual positions (for instance, lumping 3-4 outside linebackers and 4-3 defensive ends together as “edge players,” and separating the offensive linemen into tackle, guard and center categories), but that’s a discussion for another day. For today, it means Clowney’s underpaid.

Teams in need of pass-rushers

Pass-rusher has become a little bit like quarterback — teams just generally don’t let the best ones hit the market if they can help it. So if you need an edge guy and you’d been saving your free-agent bucks for Lawrence or Clark or Ford or Clowney … you’re out of luck.

Only one team is going to get Flowers, and after him you’re into Dante Fowler Jr./Ezekiel Ansah territory. Do you feel lucky? Well, you kind of are, because it so happens that this year’s draft class is loaded with a couple of dozen genetically engineered Autobots and Decepticons who play all over the defensive line. But if you were hoping to find pass rush in free agency, you’re not thrilled about what happened at the franchise deadline.

Foles’ likely signing in Jacksonville, coupled with the Broncos’ soon-to-be-official trade for Joe Flacco, takes away the two most obvious landing spots for a quarterback looking for a chance to start. Could Miami or Washington sign Bridgewater and give him a shot as a starter? Possible, sure, but the pool is drying up, and it might be that Teddy B has to go back to New Orleans and back up Drew Brees for at least one more year before finally getting his second chance to lead a team.

As we wrote a couple of weeks ago, it’s a buyer’s market this year at quarterback. Bridgewater, Ryan Tannehill, Blake Bortles, Tyrod Taylor … they’re all likely headed for backup jobs.

The Patriots had three players they legitimately could have franchised: Flowers, tackle Trent Brown and kicker Stephen Gostkowski. They franchised no one, which isn’t unusual for a team that doesn’t like to pay top dollar for guys often, but that still could put them in a position to have to replace a couple of key players.

I get Brown since he wasn’t a starting left tackle before 2018 and now likely wants to get paid like one. Gostkowski … playing it fast and loose at kicker is a little weird for a team that has employed only two of them in the past 23 years, but maybe the Patriots know they’ll get him signed. (Or maybe they have someone else lined up for the next decade-plus.)

As for Flowers, you’re right if you’re sitting there claiming double standard when I ripped the Giants for letting 25-year-old Collins walk but not the Pats for letting 25-year-old Flowers out the door. You’re right. But the fact that the Patriots have won 100 games to the Giants’ 47 since the last time Eli Manning beat Tom Brady in the Super Bowl gives them the benefit of the doubt.

They’re in this “losers” section because they might end up “losing” three key players who were tag candidates. But the “kinda” is a nod to the fact that you can always trust this team to figure it out.