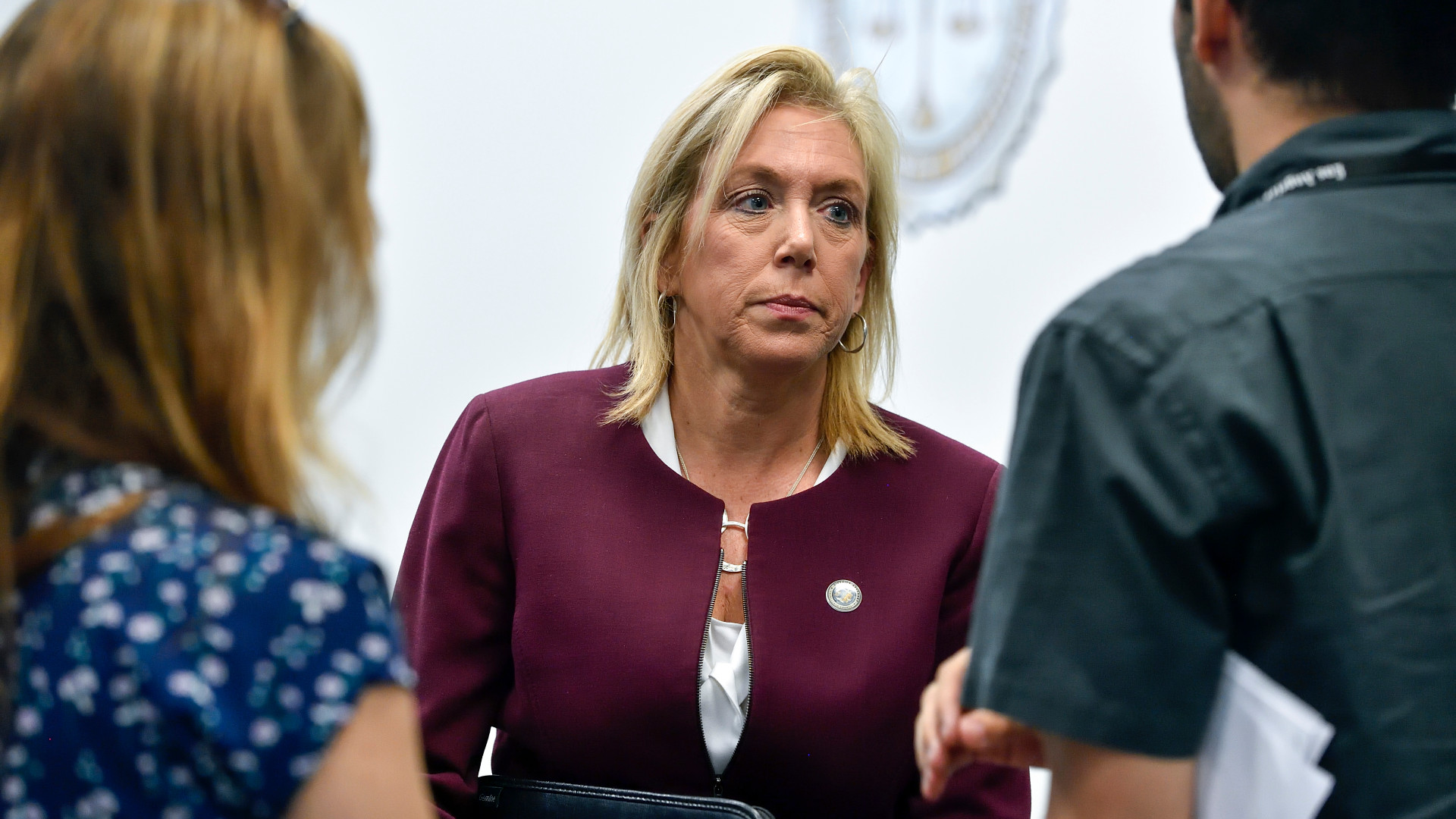 Stephon Clark’s family didn’t have any real hope that Sacramento County District Attorney Anne Marie Schubert would charge the police who killed the unarmed 23-year-old in his grandparents’ backyard in 2018.

But Schubert’s press conference on Saturday managed to shock them anyway — not in her detailed explanation of the evidence that the officers sincerely believed Clark’s cellphone was a gun, but in what came next.

After first insisting that her investigation’s sole question was whether or not Clark’s killing was a crime, Schubert suddenly moved the goalposts 45 minutes in. With that question already thoroughly answered, Schubert additionally revealed that Clark had been accused of domestic assault two days prior to his death, that he’d threatened to kill himself, and that his children’s mother gave a “very negative” response to the last text Clark ever sent her: a question, attached to a picture of his own hand holding 10 prescription pills.

“We were realistic about what the likely outcome would be, that there would be no charges,” Land said. But the family was taken aback by “the lowness of where she stooped to with putting out all this information,” she said — a move that “completely blindsided” them after Schubert did not mention the information during a brief private meeting with Clark’s mother just hours before the press conference.

Schubert, through a spokesperson, declined to clarify her intent or legal logic, or to address Land’s claim that her office hadn’t shared the same details with Clark’s own family members before she revealed them on camera.

Locals protested Schubert’s decisions in downtown Sacramento on Monday night, with marchers blocking a strip of highway they had repeatedly commandeered in the immediate aftermath of Clark’s killing last year. Police showed less patience with the activists this time, arresting more than 80 people who refused to disperse from a roadway that is closely linked to the racial segregation that shaped the city and neighborhood where Clark grew up and died.

Schubert’s smear wasn’t necessary, legal experts told ThinkProgress. The current courtroom rules in the United States, combined with the facts Schubert laid out over the first 45 minutes of her press conference, produced an inexorable conclusion that Clark’s killers had been justified.

“While she is almost certainly correct to conclude that current case law would not support convicting the officers who shot and killed Stephon Clark, District Attorney Schubert probably overshared information about Clark’s mental state,” said Jonathan Blanks, a research associate at the Cato Institute’s Project on Criminal Justice. “She was under no obligation to share her theory as to why he was acting out in the way he was and could have simply let it go without saying in her public comments.”

American Civil Liberties Union of California legislative advocate Lizzie Buchen agreed, calling it “excessive and unnecessary” and noting that Schubert has now declined to charge any officer in more than 30 separate on-duty shooting investigations during her career.

“She is again bending over backwards to find a reason not to prosecute, and to exonerate herself and her office from anyone finding fault with these decisions in part by painting this picture of this person who the officers killed,” Buchen said.

The law requires jurors and prosecutors to rely on what the officers “honestly and reasonably believe[d],” as Schubert correctly stated. The officers’ body cameras captured a flash of light near Clark’s hands that is consistent with the officers’ separate explanations for why they thought the cellphone he was holding was actually a gun. And their “spontaneous statements” about a gun in the seconds after they killed Clark are “considered inherently reliable” by the courts, Schubert said.

It isn’t just outside observers who say Schubert could have stopped there. Schubert made the same point herself, repeatedly and less than an hour before she shared Clark’s phone records.

“Our question in this review is limited to one question: Was a crime committed?” she said five minutes into the press conference, repeating the query twice more in the next minute. Two minutes later, she repeated it again, saying that determining whether police officers had committed a crime was “the single question we have today in our review.”

Yet Schubert dropped that single-minded focus in the final 20 minutes of her presentation, detailing lurid snapshots of Clark’s final 48 hours punctuated with apologies for the pain she knew she might be causing. When reporters dutifully connected the dots she’d laid out by asking if Clark had intended to commit “suicide by cop” that night, Schubert demurred and moved on to other questions.

“Some of the details that came out during the course of that press conference were unbeknownst to anyone except the parties directly involved with the exchange of messages,” said Land, the Clark family friend. “His mother made it very clear that she had an incredible relationship with her son and that there was not much that was happening in his life that she was not privy to [but] there was no knowledge about the depth of those text messages.”

After SeQuette Clark watched her son’s character questioned on television, she told national reporters it was “a smear campaign.” Land then stepped in at her request to field all other questions for the family.

Land said the family now hope to change the legal standards governing police use of deadly force. The state legislature is due to consider a measure this spring — AB 392 — that would tweak the rules in a fundamental way that advocates say would not increase the dangers officers face.

Under the current standards, Buchen said, “an officer can kill someone in any situation where it is reasonable to do so. It doesn’t matter if they had access to a taser, or if they could have retreated safely.” AB 392 would retain the prohibition on evaluating officer actions through information they didn’t have at the time. But it would require officers to exhaust all other reasonable and safe options before they resort to deadly force.

“We’re using the same vantage point but asking a different question,” Buchen said. “Instead of ‘Was it reasonable for an officer to do this?,’ the question is, ‘Was it necessary?’”

Such a change in law would modify the question prosecutors like Schubert get charged with answering in cases like Clark’s. But it wouldn’t change the dynamics surrounding her separate choice to invite the press to further scrutinize Clark’s personal conduct in their coverage of the city’s reaction to her decision.

In different circumstances, a prosecutor might indeed need to share this kind of personal information about serious but unproven allegations of domestic violence.

Prosecutors are famously allergic to letting cases they can’t win drag down the career statistics voters judge them by, said Phil Stinson, a former police officer turned leading academic on police accountability and use of force. “They choose the denominator, and they tell you their win rate,” Stinson told ThinkProgress.

“Doing justice is not the same as winning. But they all think about winning,” Stinson said. “I find that unfortunate that she chose to go into such detail.”

If Schubert’s legal opinion were that justice couldn’t be served by bringing an unwinnable case, it would have been vital to give the public some sense of the phone records that would lead jurors to acquit the officers, even if they felt the cops had erred under the stringent no-hindsight rules current in place. But Schubert came to the opposite conclusion about the officers’ legal liability, then shared the raw materials of a damning public narrative about Clark anyway.

“Giving her the most generous benefit of the doubt, she was trying to be fair to the officers who made a tragic decision against someone they perceived to be acting erratically,” Blanks said. “However, it hardly follows that she needed to deliver a theory of criminal defense based on information the officers on the scene did not have for a case that will never be prosecuted.”

The information Schubert opted to share on camera immediately began to recast Clark in the court of public opinion. Reporters took up the prosecutor’s invitation to chase the sorts of “he was no angel” stories that often dog families of color grieving a loved one struck down by cops in questionable circumstances.

The Clarks saw an immediate effect from Schubert’s choice, Land said, as national media pumped them for reaction quotes over the ensuing 48 hours.

“Now what are people reporting? What are people curious about? People want to know about the text messages, about the drugs, about was he in fact suicidal, the comments on social media,” said Land.

According to Land, the Clark family now worries the public conversation will follow the press conference’s lead, painting Clark’s character with an overly broad brush: “He was a thug, he was a woman-beater, he was this that and the other.”

Those tawdry simplifications, Land said, encourage the public to look past harder and broader pieces of Clark’s story. “He was 23 years old. He was in a community that has been economically disenfranchised. And oftentimes there is this vacuum, this feeling that there is no way out.”