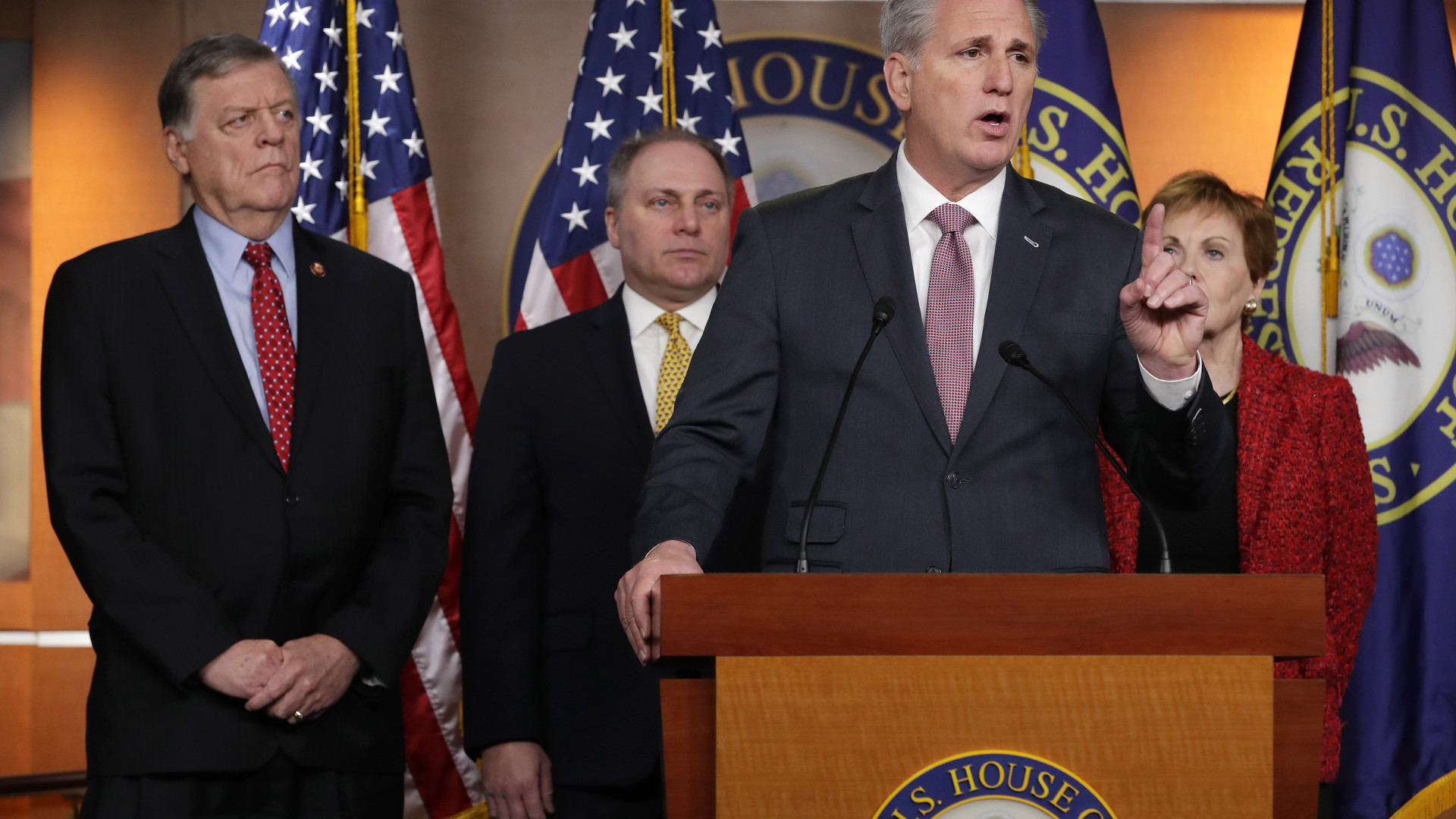 Republican lawmakers continue to criticize Rep. Ilhan Omar (D-MN) after recent comments she made about Israel, which many say involved rhetoric playing on anti-Semitic tropes.

But it seems few remember that Republicans have a poor track record when it comes to anti-Semitism, voting in February to reject one of their own proposals that would have condemned it.

On Monday evening, President Donald Trump, echoing Fox News talking points, tweeted, “Omar is again under fire for her terrible comments concerning Israel,” adding that Jewish groups are calling for her resignation from the House Foreign Affairs Committee. (The letter he referenced is actually signed by several far-right, anti-Muslim groups, not Jewish ones.)

Several other House Republicans joined in, calling for her removal from the foreign affairs committee, including Rep. Andy Biggs (R-AZ), Guy Reschenthaler (R-PA), and Pete King (R-NY), who said “anti-Semitic hate must not be tolerated in United States Congress.” Reps. Ted Budd (R-NC), Elise Stefanik (R-NY), and Lee Zeldin (R-NY) went so far as to publish an op-ed in the Hill calling for her removal from the committee.

Omar made the comments that Republican lawmakers are now seizing on last week, when she was on a panel at a Washington, D.C. cafe with Rep. Rashida Tlaib (D-MN), the first female Palestinian member of Congress and, along with Omar, one of the first Muslim congresswomen.

“I want to talk about the political influence in this country that says it is okay to push for allegiance to a foreign country,” Omar said on that panel, during a conversation about allegations of anti-Semitism made against her and Tlaib.

Without more context, and with the word choice “allegiance,” many people have noted that Omar’s language, whether intentional or not, played on anti-Semitic tropes. Specifically, the claim that Jewish people have “dual loyalties” — an accusation that has been lobbed against and other minorities throughout history as a way to say their allegiance can’t be trusted.

But when it comes to the criticism coming from Republican lawmakers specifically, it’s worth noting that many of the House Republicans now bashing Omar voted against a measure in Congress denouncing anti-Semitism less than three weeks ago.

In February, 177 House Republicans voted against a bill that included a motion to combat anti-Semitism — an amendment they had introduced themselves.

Though it didn’t mention Omar by name, the amendment was likely intended to embarrass the Democratic party since it was introduced in the wake of comments the Minnesota congresswoman made about U.S. support for Israel being “all about the Benjamins” — which many people pointed played on anti-Semitic stereotypes about Jewish financiers controlling politics.

The amendment was tacked onto a bill that would end U.S. military assistance for the Saudi-led war in Yemen and order the president to withdraw any U.S. troops affecting the war — unless they are fighting Al Qaeda on the Arabian Peninsula — within 30 days of it being passed into law.

In the end, every Democrat voted in favor of the amendment, which unanimously passed. And nearly every House Republican voted against the final bill, which still passed, but stalled in the Senate due to the added amendment.

“This is what’s wrong about this place. They pushed out a [motion] to try to make us look bad, and then they’re forced to vote against their own [motion] after the bill passes,” Rep. Max Rose (D-NY), who is Jewish, said at the time.

Why did so many @HouseGOP members just vote against their own legislation condemning anti-Semitism? 🤔 pic.twitter.com/XdsCo03l3L

The double standard hits at what many progressive Jewish leaders say is the bigger issue about the backlash Omar is now facing.

“Did Ilhan use some phrases that I wish she hadn’t and that I don’t want to defend? Yes,” said Max Berger, co-founder of IfNotNow, an American Jewish movement to end support for the occupation. “But the point she was making substantively is absolutely true, and the reason that she’s facing the level of anger… coming at her that she is, has everything to do with her politics, and who she is, and very little to do with the fact that she used an anti-Semitic trope.”

Sonya Meyerson-Knox, the media program manager at Jewish Voice for Peace, which has said that it does not see Omar’s comments as anti-Semitic, also highlighted the double standards.

“When we see criticism of representative Ilhan Omar coming from someone like Rep. Kevin McCarthy who has made anti-Semitic tweets of his own or more recently by Rep. Jim Jordan [(R-OH)], who kind of had an anti-Semitic tweet over the weekend, and they are still somehow able to criticize [Rep.] Ilhan Omar, there is nothing good faith going on there and it is absolutely unmitigated hypocrisy,” said Meyerson-Knox.

“The GOP uses open anti-Semitism on a fairly regular basis,” said Berger. “The president incited the largest act of domestic terrorism directed against Jews in the history of the United States five months ago. And somehow, that’s not what we’re talking about when we’re talking about anti-Semitism in the United States. It’s not about how we have a Nazi sympathizer in the White House, but that there is a black Muslim woman who thinks that the occupation of Palestine is a problem. That’s the conversation we’re having. And that is fucking insane. There is just no way that makes sense.”