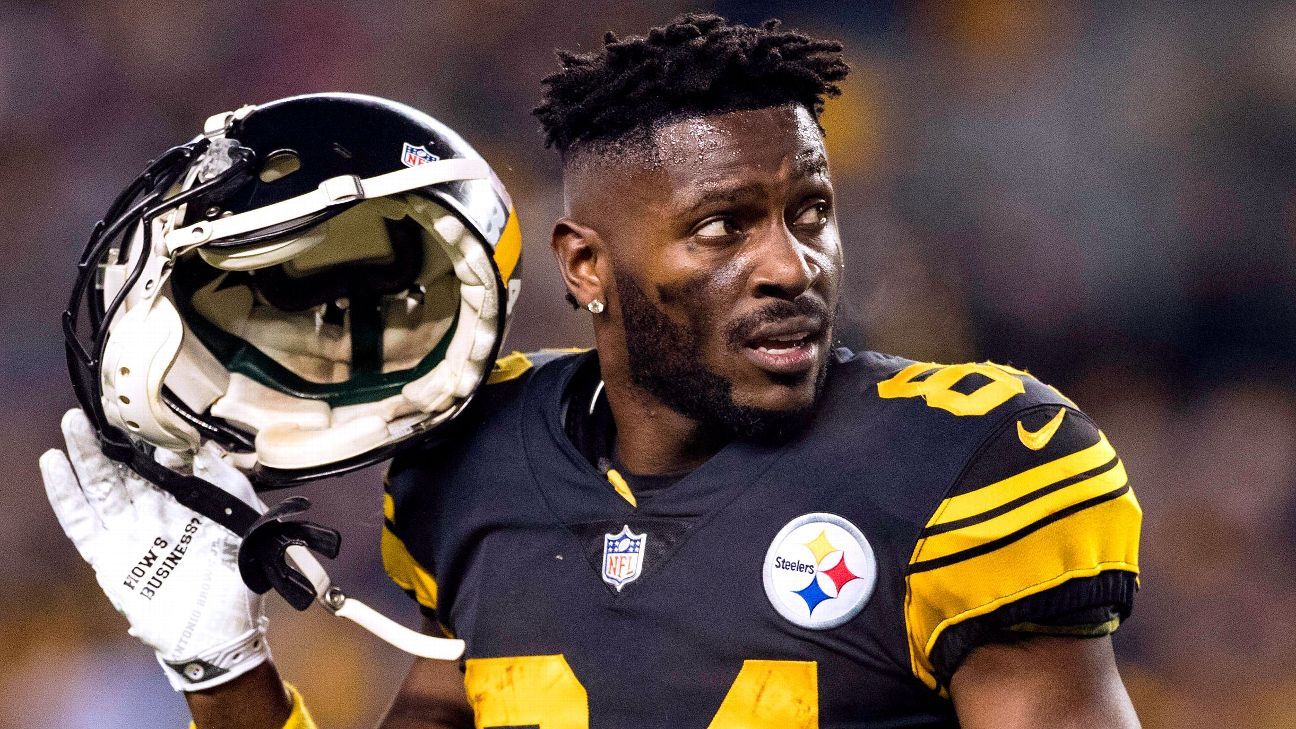 The three teams that have shown the most interest in trading for wide receiver Antonio Brown are the Oakland Raiders, Washington Redskins and Tennessee Titans, league sources told ESPN’s Adam Schefter. But which team would be the best landing spot for Brown? What are the pros and cons of adding Brown, who wants out of Pittsburgh? Our NFL Nation reporters weigh in:

How would Brown fit in the offensive system?

Turron Davenport, Titans reporter: Brown averaged 171 targets per season over the past six years. It is highly unlikely he would get that many targets in a run-heavy scheme for the Titans. On the surface, Brown and the Titans don’t seem like a match. But Brown’s ability to score every time he touches the ball would be coveted by a team that desperately needs to become more explosive. Brown had six receptions of 40 yards or more last year. The Titans’ offense, meanwhile, had only six passing plays of 40 yards or more.

Paul Gutierrez, Raiders reporter: How about … like a glove? The Raiders have no speed and even less game-breaking ability at receiver on the roster. Sure, Brown will be 31 in July, but that’s three years younger than Jordy Nelson, and the Raiders need a deep threat — badly.

John Keim, Redskins reporter: Brown fits in any offensive system that wants players who can make big plays. Brown wins fast at the line, and the Redskins like to use a lot of quick-game passing. And how about this: Since 2013, the Steelers averaged 4.51 yards per carry when Brown was on the field on first down and 2.50 when he wasn’t. The Redskins love running on first down.

How would Brown be received in the locker room?

Davenport: Brown didn’t pull any punches when asked about being viewed by general manager Kevin Colbert as one of the 52 kids below QB Ben Roethlisberger in Pittsburgh. Marcus Mariota would likely never call out one of his teammates like Roethlisberger did, so that bodes well for their relationship. Getting on the same page when Mariota extends plays will take time, but it’s an area in which they can do damage.

Gutierrez: Like a prodigal son returning. Look, QB Derek Carr famously vibed with Brown at the 2018 Pro Bowl. “He’s special, man,” Brown said of Carr at the time. “It’s been an honor catching the ball from him. He’s a great young quarterback, young champion, and [possesses] all the fundamentals to be one of the greatest.” And this from Carr at a charity event Saturday night, per the Fresno Bee: “If it works out in the business side, I know the locker room will be arms wide open to accepting Antonio.”

Keim: The Redskins have had several strong characters in recent years, from DeSean Jackson to D.J. Swearinger to Josh Norman to Zach Brown. Those players rubbed some teammates the wrong way, moreso when not producing. If QB Colt McCoy starts, he’s a quiet and strong leader respected by players. An added bonus: He doesn’t publicly call out players.

Davenport: Brown alone would make the passing game a legitimate threat. Teams would no longer be able to stack the box against Derrick Henry and the running game because Brown will win one-on-one matchups against any cornerback. Although Brown is considered a high-maintenance player, his work ethic is legendary. Having him in the building would push younger receivers such as Corey Davis and Taywan Taylor to elevate their game.

Gutierrez: Um, everything? On the field, the addition of the erstwhile “Sticky Bun” would provide a jolt of electricity and excitement for an oft-moribund offense. In the stands, well, Brown would serve as a kind of a “makeup” gift for an Oakland fan base that is losing its team to Las Vegas in a year.

Steelers GM Kevin Colbert says that they want a situation that benefits both Pittsburgh and Antonio Brown, but their main priority is the interest of the Steelers.

Davenport: Brown might not react well to not getting the number of targets he has seen in the past. He’s a passionate player and wants to win. If the Titans don’t win games and Brown doesn’t get enough touches, things could go south.

Gutierrez: Still looking … OK, what about the seven-time Pro Bowler being a diva and a distraction for a franchise under reconstruction? Meh. OK, what about the four-time first-team All-Pro taking snaps from a developing wideout? That doesn’t fly either, unless you think the Raiders are going to draft D.K. Metcalf. Brown would eat up some cap space, but Oakland has a lot.

Keim: Perhaps it’s the possible distraction, but players get used to crazy situations here. A lot of guys on offense — tight end Jordan Reed, running back Chris Thompson — have desired more help from the outside, so they’d be excited. It’s not like everyone hated Brown in the Steelers’ locker room. Washington has only $17 million in cap space, but can free up more to absorb Brown’s $15.1 million cap hit this year. As one member of the organization said, they need more than one player.

Is the potential of Brown being a distraction worth the reward?

Davenport: Yes. Brown would elevate the offense because of how much attention he demands from defenses. Coach Mike Vrabel has established himself as the authority figure, and given his experience as a player with the Patriots, he’s familiar with a locker room that easily accepts disgruntled players from other teams.

Gutierrez: Yes, because it is not like the Raiders are simply one player away from competing; they have holes all over the roster. And Jon Gruden & Co. dealt with “distractions” from Marshawn Lynch to Martavis Bryant to the trades of Khalil Mack and Amari Cooper last year. So, distract from what, exactly?

Keim: Yes. He’s a future Hall of Famer and game-breaking wideout, and the Redskins’ offense needs a major boost. This staff needs to win now. Brown wouldn’t be the first “distraction” they’ve endured, though it often ends poorly. So the caveat is this: The Redskins must retain power over the situation by not guaranteeing the final years of his deal. That way they can reassess the relationship at season’s end. I doubt Brown would be thrilled with that arrangement.

Is your team the best landing spot for Brown?

Davenport: No. The Raiders have an experienced playcaller in Jon Gruden and a quarterback in Carr who would pair better with Brown. Also, moving to Las Vegas in 2020 would be a perfect setting for Brown to be maximized as an attraction for the franchise. Oakland has plenty of cap space, so Brown could get the new deal he wants.

Gutierrez: Yes. Brown likes Carr, and Gruden loves Brown, so much so that he said Brown was the hardest-working practice player he had ever seen — and that included Jerry Rice. Then there’s this in 2020: Brown in Las Vegas.

Keim: No. Oakland has more to offer in terms of what it can trade, a coach with security and therefore power, and the ability to appease Brown’s desire for guaranteed money. We don’t even know who will start at quarterback for the Redskins, if indeed it will be McCoy or someone else. It’s hard to imagine Brown being happy if he’s dealing with mediocre QB play — or worse.