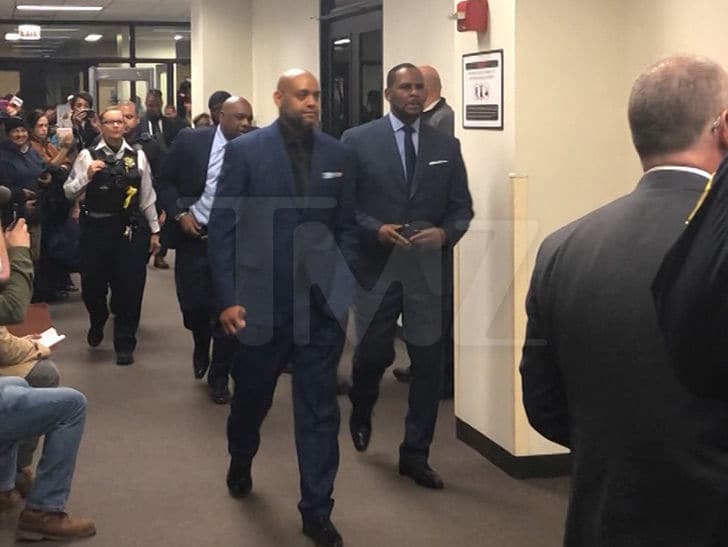 2:03 PM — The Cook County Sheriff’s Office tells TMZ … R. Kelly’s headed to jail for failure to pay child support. He’ll need to cough up the full amount of dough to be released.

1:35 PM PT — Deputies just escorted R. Kelly out of the courtroom, and he’s been arrested. No official word from court, but it would appear he didn’t cough up the $161k.

11:52 AM PT — R. Kelly just showed up to court in a black sprinter van accompanied by his legal team. We’re told the child support hearing is set to begin any minute now.

R. Kelly‘s dangerously close to heading right back to Cook County jail for failing to pay more than $160k in child support.

Sources connected to the embattled singer tell us Kelly hasn’t covered the $161,633 he owes to his ex-wife, Drea Kelly, and his deadline is today … Wednesday at 10 AM Central Time. If Kelly doesn’t settle up with the court by then, he can be hauled off to jail.

Ironically, Kelly ranted and sobbed to CBS about wanting a relationship with his kids. That interview was taped Tuesday, and we’re told he had not paid at that point.

TMZ broke the story … Kelly actually owes Drea nearly $200k, all told, and he’s known since last month he had to pay the minimum amount of $161k by March 6.

Additionally, the D.A. could charge him criminally for failure to pay the support. Any amount over $20k is a felony.

We’ve reached out to Kelly’s attorney, but no word back.