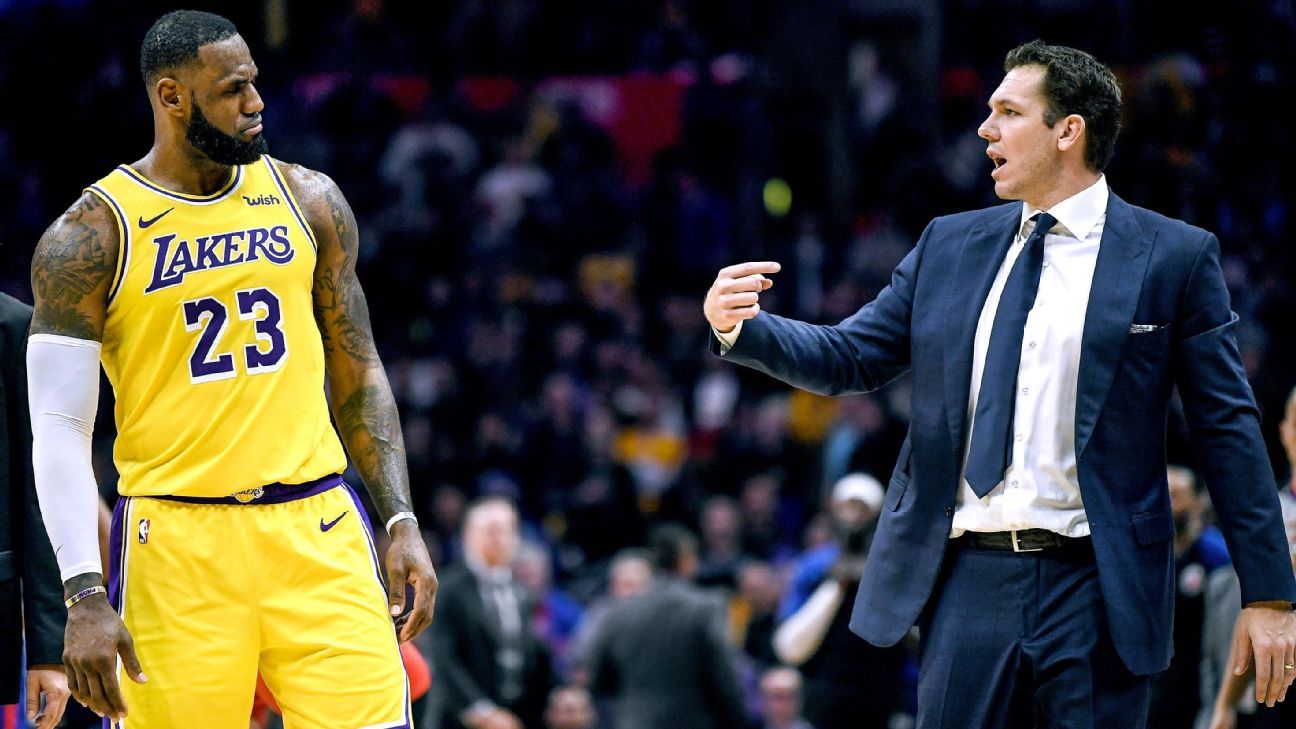 The Los Angeles Lakers‘ playoff chances continue to dwindle. What does it mean for LeBron James and the future of the franchise?

1. The Lakers’ playoff chances are …

Kevin Arnovitz, ESPN: Remote. By dropping game after game against non-playoff opponents, the Lakers have surrendered control of their fate to the teams who sit above them in the standings. Even if the Lakers were to finish 13-5 in their brutal remaining schedule, a 6-10 finish by the LA Clippers and 7-10 finish by the San Antonio Spurs would edge them out.

Chris Herring, FiveThirtyEight: Dead. They were already slim over the weekend, but the loss to the Phoenix Suns just about did them in. Looking at their remaining schedule — and how favorable the schedules are for the other playoff contenders — the race is all but over.

Tim MacMahon, ESPN: Very close to their odds of winning the lottery and landing Zion Williamson. That’s the math, not my opinion. The only reason to even consider the possibility of the Lakers pulling off a miraculous playoff push is the presence of LeBron, the driving force behind an unprecedented NBA Finals comeback from a 3-1 deficit a few years ago. But there’s no Kyrie Irving on the Lakers’ roster, at least not yet.

Bobby Marks, ESPN: Bleak for next season. Unless the Lakers begin building out the roster the right way, this team is going to be in the same position next year.

Don’t forget that the teams ahead of the Lakers in the standings are only going to get better, and lottery teams such as the Sacramento Kings and Dallas Mavericks are on the verge of becoming playoff contenders.

Kevin Pelton, ESPN: Barely passing the “any chance?” test. Realistically, 44 wins is probably the minimum necessary to make the playoffs in the Western Conference, and that would require the Lakers to go 14-4 the rest of the way against a difficult schedule ranked fifth hardest by ESPN’s Basketball Power Index. The Lakers have almost no remaining margin for error after using the vast majority of it over the past three weeks.

2. The Lakers’ biggest problem is …

B. The front office

D. Excessive expectations given the roster

Marks: Excessive expectations, with a touch of the front office. The Lakers needed a combination of health, development from the young players and standout play from the guys on placeholder contracts to succeed this season. They fell short on all three. Magic Johnson and Rob Pelinka also learned GM 101 the hard way before the trade deadline — stick to the plan set forth in the offseason and don’t go off script. Instead, the Lakers became desperate when Anthony Davis requested a traded and ditched their conservative approach.

Arnovitz: The front office, with an assist from ownership. Curiously, Lakers owner Jeanie Buss said on Saturday that the biggest challenge for the Lakers was none of those things, but rather “‘fake news’ about how we were supposedly trading our entire roster for a certain player, which is completely not true.” Herein lies another example of how the most blessed team in the NBA — one that has a multibillion-dollar local broadcast deal, the most appealing market, the most storied history, the services of the most talented player in a generation, and three No. 2 draft picks in the past four years — lives in a state of willful ignorance of its own shortcomings.

At some point, the Lakers will need to look inward and figure out how to perform the unglamorous work of building a winning basketball organization as if they didn’t have all those things working in their favor.

MacMahon: I guess that depends on how much say LeBron had in the front office’s puzzling personnel decisions after they got him on board this summer. The combination of bad basketball fit and potential for chemistry catastrophes was comical. By the way, you think a shooting big man with a high basketball IQ like Brook Lopez could have helped the Lakers?

Pelton: The front office, at least in terms of this season’s performance. Expecting a .500 record wasn’t unreasonable, even with the time LeBron missed. All the problems everyone else saw with how the Lakers built around James last summer — lack of shooting, veterans competing with younger players at the same position, defensive concerns — have come to pass over the past two months and have (likely) doomed the Lakers.

Herring: The front office. Yes, Magic Johnson said that he and Rob Pelinka got input from LeBron. But Magic and Pelinka ultimately run the show. Just about everyone looked at the Lakers’ offseason moves and squinted their eyes with confusion. We all assume that Luke Walton will end up paying the price for this season, but at some point the front office is going to have to illustrate the ability to do more than just sign LeBron to move this club forward.

3. What is the realistic best-case outcome for the Lakers this offseason?

MacMahon: Kyrie Irving, who made a point to let the world know that he had mended fences with LeBron, bolts Boston for a reunion with his championship co-star in L.A. That causes the Celtics not to go all in on a trade offer for Anthony Davis, forcing the Pelicans to negotiate in good faith with the Lakers, who would suddenly have the NBA’s scariest trio.

The Lakers’ playoff hopes are slipping. What’s next?

Arnovitz: For whatever reason, Boston backs off its pursuit of Anthony Davis and/or resists putting its best assets into a deal and no mystery team steps up with an appealing offer. The Lakers would acquire a top-five talent in Davis, persuade another high-level, if not elite, performer to join the ranks, and fill out their roster with productive contributors.

Herring: Getting a higher-than-expected lottery pick, and either land Davis via trade or sign a star free agent who can play both ends of the floor. The front office desperately needs to speed up this young team’s timeline if it wants to make better use of James’ last few productive years in the game.

Pelton: I suppose it’s realistic to think Kyrie Irving could be interested in a reunion with LeBron after both have seen how difficult life can be without the other this season. And Irving signing with the Lakers would weaken the trade market for AD, although the idea of the Lakers ending up with both Kyrie and AD may move us out of the realm of realism.

Marks: That the Pelicans lose leverage when it comes to Davis and re-engage with the Lakers. If Boston moves on, Los Angeles could be able to dictate the terms of a trade, leading to a watered-down deal (Brandon Ingram, Kyle Kuzma and L.A.’s 2019 lottery pick) that leaves the Lakers with Lonzo Ball, Josh Hart, Moritz Wagner, James, Davis and $20 million to spend in free agency.

4. What is the realistic worst-case outcome for the Lakers this offseason?

Pelton: They strike out on the big stars and lack the patience to wait for the summer of 2020 (or decide they’re unlikely to get Davis depending on where he gets dealt) and instead tie up their cap space on a declining veteran free agent like DeAndre Jordan. You know, sort of like what the Lakers did in 2016 when they signed Luol Deng and Timofey Mozgov.

Arnovitz: The Lakers fail in their pursuit of Davis, and are never truly in the mix for Kawhi Leonard, Kevin Durant, Kyrie Irving, Klay Thompson or Kemba Walker. Feeling the pressure to close a deal with a big-name talent, the Lakers extend a four-year, $141 million maximum contract offer to Jimmy Butler. who will turn 30 just before training camp opens in September. They fill out the roster with seasoned veterans, the best of whom are four years past their prime.

Marks: The worst-case scenario isn’t missing out on the big stars; it’s losing patience and overspending. Stopping the star chase could actually be a great outcome. The Lakers should copy what the Pacers did following the Paul George trade: Sign players to two-year contracts (think Danny Green, Jeremy Lamb, T.J. McConnell) and remove the consistent cloud of uncertainty about who is staying and going on this team.

Herring: That no star free agent is all that interested in joining the Lakers, and that the front office — which botched this latest roster construction — now has to make the team more competitive through an array of smaller signings. It doesn’t mean the Lakers can’t get better that way. But it’s hard to see how they become a true contender without another top-flight player, and how Magic would nail next season’s roster perfectly in patchwork fashion.

MacMahon: Davis gets dealt to another team and no elite-tier free agent wants to sign up to be LeBron’s sidekick. The Lakers overpay for a non-superstar in free agency and are stuck scrapping for one of the West’s final few playoff spots as LeBron grows older and more frustrated.

Herring: Fiction. James has already far surpassed the typical aging curve. He’d never really been hurt before this. He’s still incredible — and will likely find himself back in the postseason — he’s just probably not the best player in the world anymore. The situation in Los Angeles will continue to get an unbelievable amount of attention because of the market and because LeBron has always been viewed as a savior of sorts. But at some point, players age. If that’s finally what’s happening in James’ case, it seems silly to hold that against him despite everything else he has accomplished.

Get ready for Zion Williamson, Ja Morant and more.

Arnovitz: Fiction. When James’ legacy is examined in the distant future, the three championships and eight consecutive NBA Finals appearances are indelible, as is his cultural import as a figure who redefined the terms of self-determination for the professional athlete in North America. The Lakers chapter, should it end as ignobly as this season, will be a historical footnote.

MacMahon: Fiction. His three championship rings will still be shiny. He’s got a good chance of retiring as the NBA’s all-time leading scorer. We can keep wasting breath on the Jordan vs. LeBron GOAT debate, but no matter what happens in L.A., LeBron’s legacy as one of the very best to ever play the game is secure.

Marks: Fact for Lakers fans, but fiction for the rest of the world. We learned how hard it is to build a competitive roster by what happened with the Lakers. It’s easy to cast blame on James for the failures of this season. After five straight lottery appearances, James was supposed to be the savior and duplicate what he did in Cleveland. While many could criticize the roster in Cleveland, the pieces fit and players had defined roles — unlike this current team.

Pelton: More fact than fiction. I don’t think LeBron’s legacy will be tarnished by what happens with the Lakers, which would soon become a footnote. After all, how often are Kobe Bryant’s post-Achilles injury seasons considered in his historical résumé? At the same time, if the Lakers are unable to build a contending team, James will have missed the opportunity to do so elsewhere and add another title or two to his GOAT candidacy. That’s the possible negative effect.