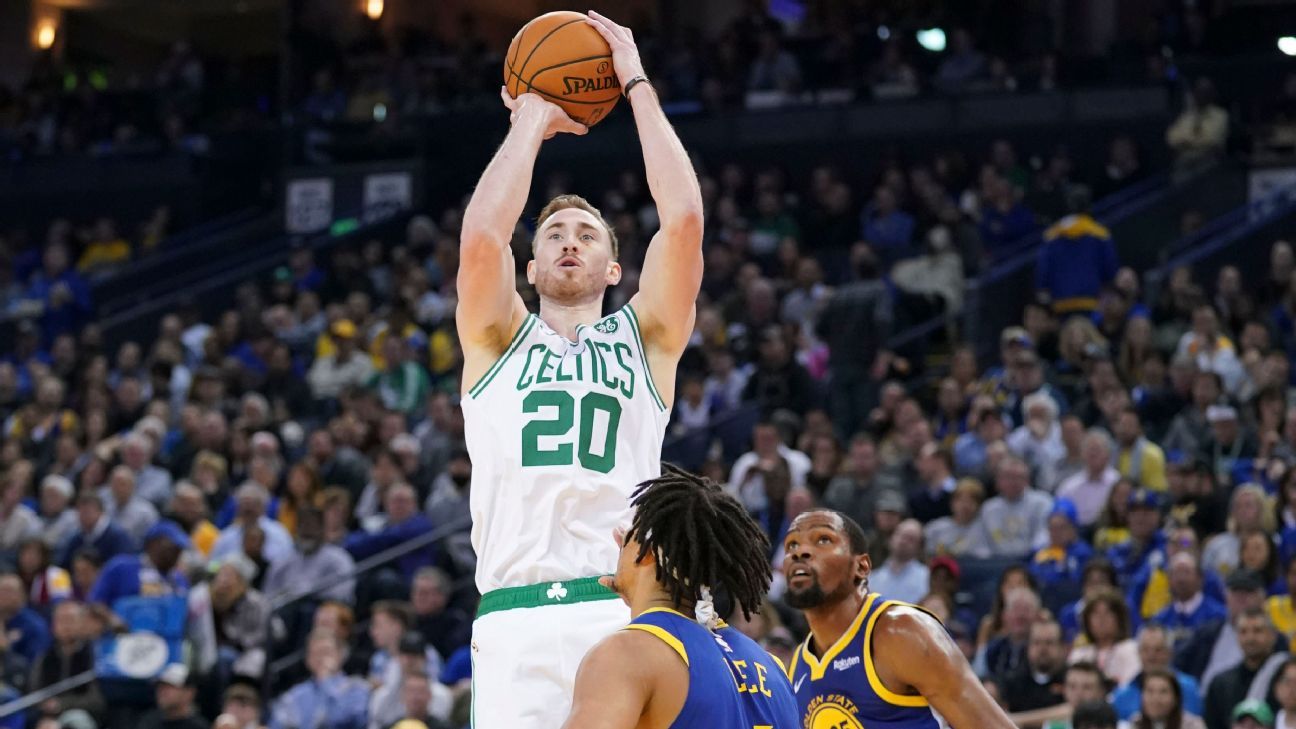 OAKLAND, Calif. — As the Boston Celtics have meandered their way through this season, vacillating between looking like an NBA Finals contender and a team destined for a first-round playoff exit, the biggest barometer for the team’s success on a nightly basis has been the play of forward Gordon Hayward.

Tuesday night’s rout of the Golden State Warriors was the latest example of why.

On a night when just about everything went right for the Celtics, it was Hayward who led the way with 30 points, seven rebounds and four assists off the bench to power Boston to an emphatic 128-95 victory over the two-time defending champions.

Hayward’s gradual progression back to the player he was prior to suffering a gruesome leg and ankle injury six minutes into last year’s season opener against the Cleveland Cavaliers has been one of the recurring storylines in a Celtics season that has never quite gotten going the way it was supposed to.b

His play since Boston returned from the All-Star break has been a microcosm of that. After sitting out the Celtics’ first game back with a sprained ankle, Hayward scored 26 points on 8-of-26 shooting in the next five games — four of which Boston lost.

Then came Tuesday night, when he produced more points and made baskets (going 12-for-16 on the night) than those prior five games combined.

“I understand it’s one game,” Hayward said. “You are going to have ups-and-downs in the season. I’ll try to build off the things I did correctly tonight, and the next time you have a bad game, try to learn from that one.”

While Hayward was outstanding Tuesday night, playing arguably his best game of the season, the Celtics have been wildly successful this season whenever Hayward has even given them a solid performance.

To that end: After Tuesday night, Boston is 18-2 in the 20 games this season Hayward has shot at least 50 percent from the floor, and 17-22 in the games he doesn’t.

Hayward’s play was emblematic of how the night went for Boston overall. The Celtics, who had trailed the Houston Rockets by 22 at halftime Sunday afternoon in what became Boston’s fourth loss in five games, completely turned the tables in this one, leading the Warriors by 25 points at halftime in a game Boston led by as many as 35 in a wire-to-wire win.

Boston shot over 50 percent from the field and over 40 percent from 3-point range while forcing Golden State into 22 turnovers — the most noteworthy one being a steal Hayward had on a pass intended for Stephen Curry that turned into a fast-break slam dunk that sent Boston’s entire bench into hysterics.

“You know what, I think we, as a group, in all honesty, we wish him well,” Al Horford said. “We want him to do well, to perform. So when he has these big games, we all feed off of them. He’s such a good player … we’re just better. When he plays at that level, we are just a better team.”

The positive vibes weren’t just directed at Hayward, though. After losing five of their first six games after the All-Star break, the mood around the team was visibly different over the past 48 hours after the Celtics flew West for the beginning of a four-game West Coast swing — something Celtics coach Brad Stevens noted before Tuesday’s game. When asked about it after Tuesday’s win, Kyrie Irving said the difference was the bonding that went on during that long cross-country flight.

“We needed it. It was just we were going to get to a point where we were just going to get tired of fighting each other, fighting the outside world. And it doesn’t even really matter. So we just wanted to come out here and just play basketball. This is our sanctuary. And we have to do everything to protect it. We can’t let anybody infiltrate it.”

Irving, whose own mood fluctuated throughout that losing skid, said he personally was helped by having conversations with both Stevens and Celtics president of basketball operations Danny Ainge about how, despite the Celtics having underachieved to this point, there still is plenty of time left for Boston to accomplish what it hopes to.

“Well I mean, it gets a little overwhelming, like I said, but this is just the business I’m in,” Irving said. “The business part of it is what makes it terrible for me, honestly dealing with all this s—. I’m going to be honest with you guys. The basketball part, I have to keep that fun. That’s where I’m great, that’s where I love to play and be around my teammates, that’s what makes me happy.

“The business part of it is going to be the business. Personal side of being out here with my teammates is the only thing that should matter. It wasn’t really a change of perspective, it was letting the guard down completely and just not thinking I’m at odds with everybody. It’s not a competition in this locker room, it’s a competition out there. That’s the most important thing.