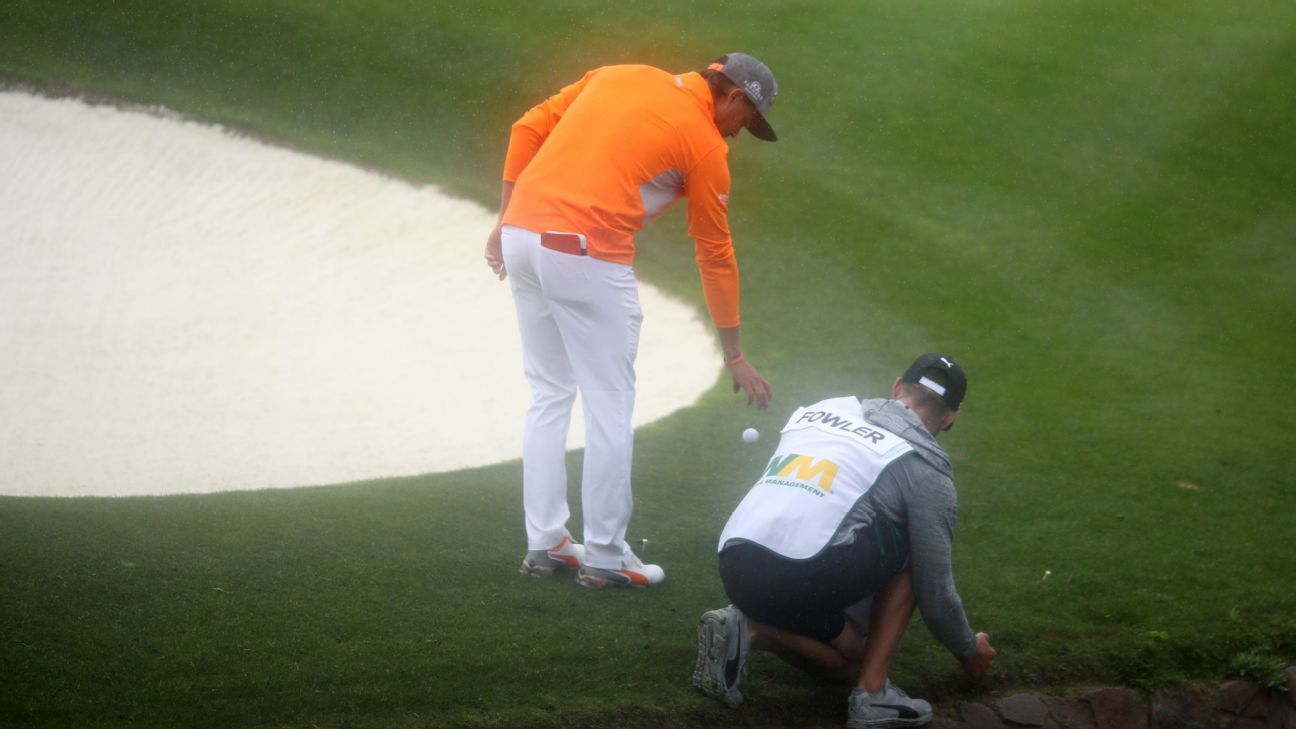 A major change to the Rules of Golf took place beginning Jan. 1, with making the rules simpler one of the big goals among the game’s governing bodies.

And in many ways, that is the case, with the rulebook being pared down from 34 rules to 24, with easier explanations and more common-sense applications meant to make the game more enjoyable for the recreational player and less confounding for those who follow the intricate rulings they see play out in the professional game.

Still, there have been some growing pains. We’ve already had a caddie alignment rule clarified, issues with the new drop rule and some concern over the ability to putt with the flagstick left in the hole.

“I think, with the new rules that have been put in place, it’s not doing any favors for our sport,” Rickie Fowler said.

Less than three months into the new year, there remains confusion and a bit of controversy, the latest involving a Twitter spat between the United States Golf Association and Justin Thomas during the Honda Classic — where another caddie alignment penalty surfaced.

“We are all clear that the new rulebook is intended to be more relevant and modern to today’s way of playing golf,” said Martin Slumbers, chief executive of the R&A, during a recent conference call. “It looked at eliminating unnecessary penalties, and it also looked to try to improve pace of play and in the long term will be very good for our game, and I think is the very right move forward.

“Clearly, we’ve been watching and working as the year has started, and I think it’s fair to say that it hasn’t gone as smoothly as I would have liked, but this is a big change … it’s not unexpected that we were going to have some difficulties. But we are working very closely with the tours and with all aspects of the game to make sure that we’re responsive, we deal with issues, and over time, I am confident that the new rules of golf will be very good for golf.”

The R&A along with the USGA, spent the better part of six years revamping the rulebook, and the various tours, including the PGA Tour, had a role in the discussions.

“Anything that can be changed rule-wise that can better the game, all of us are all for it, especially myself,” Thomas said. “But there’s just — I don’t really see a way along with other players that that improves the game of golf and the rules of golf.”

Here is a rundown of the major changes that took place this year.

It has taken some getting used to, seeing players putting on a green with a flagstick in the hole, and no caddie to tend it or remove it. Not all are on board with the idea; some feel it is strange, so they have the flag pulled.

Under the old rules, a player was penalized 2 strokes for leaving the flagstick in if it was hit while putting on the green. Now there is no penalty, and this was clearly meant as a pace of play incentive for recreational golfers.

Some players, including Bryson DeChambeau and Adam Scott, believe there is an advantage to leaving the flagstick in. Noted instructor Dave Pelz has done research suggesting as much. That was not the intent of the new rule, which could lead to an adjustment down the road.

“It wasn’t intended as a performance option,” Slumbers said. “We’ll see how it develops. I do wonder, it’s certainly not completely clear that it’s a performance advantage. Otherwise, all the players would be doing it. So they each have their own view, and I’m sure that there will come an instance where a ball will get knocked out of the hole by the flagstick on a short putt, and that might make people think. So that one, we’re going to sit and watch and see what happens.”

No longer “water hazards,” or even “lateral hazards,” it is one term to describe any area of the course that is marked with a yellow or red outline. Taking relief from them is different based on color.

Yellow staked penalty areas (think the pond on the 17th at TPC-Sawgrass) require a drop in a defined area where the player played their previous shot or a defined drop area; or on a line that extends from the hole through the spot where the ball crossed into the penalty area. Both scenarios mean a penalty stroke.

Red staked penalty areas offer a third option. A player can take lateral relief within two club lengths of the spot where the ball crossed the penalty area, no closer to the hole. Also, a penalty stroke is added.

A big part of the new description of a penalty area allows for players to remove loose impediments or to ground their club. That was previously a no-no.

In bunkers, you may also remove loose impediments, but touching the sand in front of or behind the ball is still prohibited. You are now also allowed to drop outside of a bunker if you’d rather not play the shot, but it’s a two-stroke penalty.

Players were previously disqualified for using a club in competition that was bent or damaged, even if they did not know about it. Now the use of such a club is allowed, as is repairing it, even if the club was damaged due to anger. But unlike previously, the club cannot be replaced during the round unless it was damaged due to outside forces, such as by another player or caddie accidentally damaging it. Tiger Woods opted not to play with a damaged 9-iron during the third round of the WGC-Mexico Championship. Thomas was dismayed by similar circumstances that happened to him during the Honda Classic.

This rule was believed to have been put in place for the LPGA, which routinely saw caddies stand behind the ball and line up their player before hitting the shot. But three times it has come into play on the men’s tours — once in Dubai, where Haotong Li was penalized 2 strokes because he was deemed to have had his caddie line him up on the 18th green of the final round. The rule states that the caddie must have left the area behind the player before he steps into his stance. A similar ruling happened to Denny McCarthy at the Waste Management Phoenix Open when he was playing a pitch shot, but the rule was later clarified by the governing bodies and McCarthy’s 2-stroke penalty was rescinded. At the Honda Classic, Adam Schenk was assessed 2 shots because his caddie had been behind him when he played a bunker shot. The key is to make sure the caddie is not behind the player before he takes a stance.

“If you think about the caddie alignment issue, it was very clear that there was a desire to emphasize that the skill of the player is prevalent and that the skill of lining up a player and aligning himself or herself is important, and therefore it was a very clear desire to say that the caddie should not be involved in the alignment of the player,” Slumbers said. “And it was a surprise, therefore, that that was the first problem we encountered as we came into this new year, partly, I think, because players maybe didn’t think that caddies were involved in their alignment process and proved to be so. That was a surprise.

“If one thing we have maybe not done enough on the education is to explain the intent. Why were we trying to do this? Because I don’t think there are many players who would disagree that the intent is to not have caddies being involved in the alignment process.”

Drop from the knee

The intentions here were good, but players at the pro level hate the rule because they believe it makes them look silly. Instead of taking a drop from shoulder height — free drop or penalty drop — as in the past, the drop must now be taken from knee height. It doesn’t seem like a big deal, but if done wrong and not corrected, it is a 1-stroke penalty, as Rickie Fowler found out when he instinctively did it after hitting a shot out of bounds at the WGC-Mexico Championship.

Among the reasons the rule was put in place is due to another new rule that requires a drop to stay within the intended drop zone. If it’s within one club length, the drop must stay within one club length. Previously, if the ball hit the ground and rolled outside that distance, it was in play from that spot. Dropping close to the ground means there is less of a chance for the ball to run out of the drop area. If it does roll out, it must be re-dropped. If it rolls out a second time, it must then be placed inside the drop area instead of the old way which required a re-drop.

Dustin Johnson never even touched his golf ball on the green during the final round of the 2016 U.S. Open, leading to a controversial 1-stroke penalty that luckily did not cost him the victory. In the aftermath of that situation, local rules were put in place. Now it is permanently in the rulebook: if you are deemed to have accidentally moved your ball, or marker, on the green, you simply put it back and play on, without penalty. The same applies for a lost ball. If you accidentally step on it or kick while searching, you can move it back without penalty.

You could repair a ball mark, but not a spike mark. Those were the old rules. It always seemed silly that you could fix one and not the other. Now you can repair such damage on the greens and you are allowed to touch the line of your putt as long as you are not improving it.

If looking for a lost ball, you now have just three minutes to find it instead of five. The clock starts ticking when you arrive to the vicinity of where you believe the ball to be.

It can still happen, but a player will no longer be penalized for it. This can occur on chip shots or pitch shots when the ball is originally struck and then hit by the club again on the follow-through. Previously, the player had to count the second hit and was assessed a penalty as well. Now there is no penalty and only the intended shot is counted.

Local rule for out of bounds, lost ball

You won’t see this local rule ever invoked during a professional tournament. It is also unlikely at most competitions. But for the recreational player, the new rule provides an option which is meant to speed up play and keep golfers from going back to the tee or to their original spot if they hit a shot out of bounds.

Typically if a player hits a ball out of bounds from the tee, he must hit another tee shot from the same spot after adding a penalty stroke. It is a stroke-and-distance penalty.

The new local rule allows a golfer to add 2 strokes but to play the ball at the closest point in the fairway from where it cross the out of bounds line. So instead of hitting again from the tee, the player is in the fairway — two club lengths from the edge — but after 2 penalty strokes would be hitting his fourth shot. The same rule applies for a lost ball.