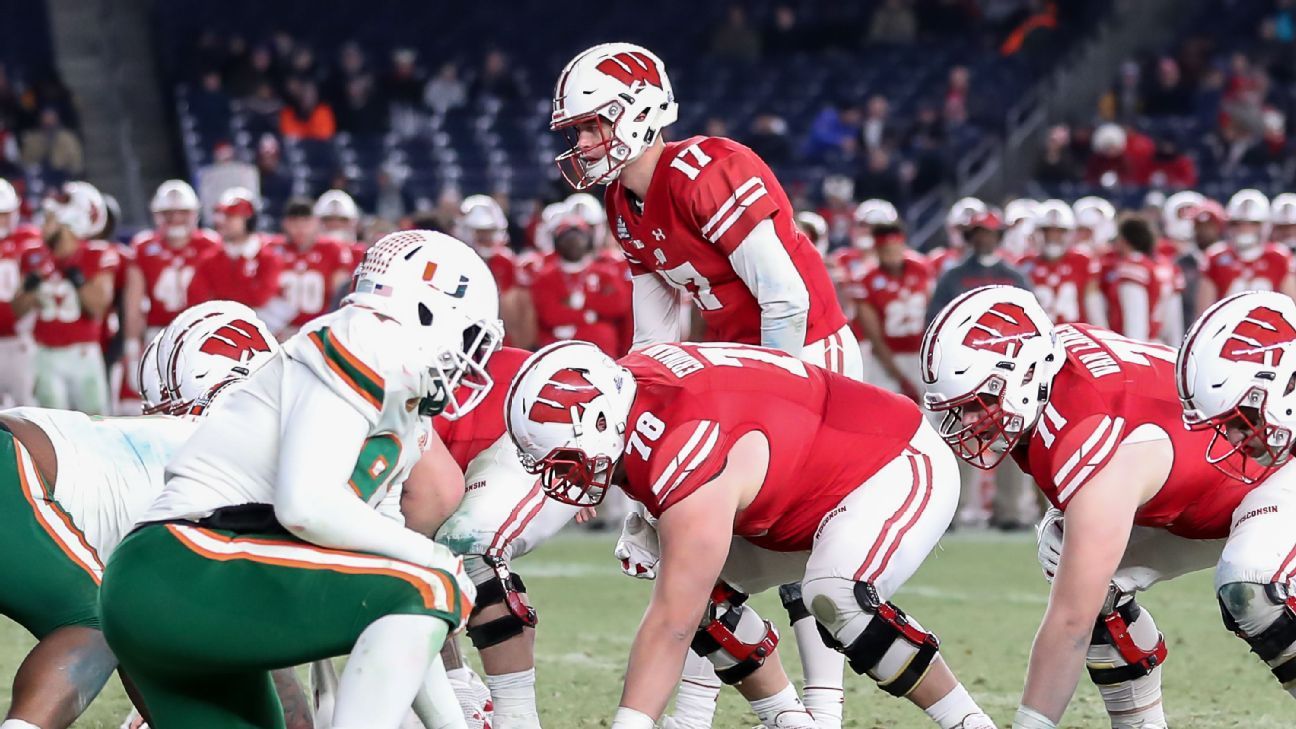 Ready or not, spring practice is already here for a few college football teams, and so are some intriguing quarterback battles.

And while nothing is ever written in stone in the spring, it’s worth noting that five of the past six national champions have had first-year starters on the field at quarterback in the championship game. It’s also a new day in college football with the influx of transfers being eligible right away, and more than a few transfers could make big splashes in 2019.

Let’s take a look at some of the more compelling quarterback competitions this spring, keeping in mind that some of the participants may not arrive on campus until the summer.

The Tigers have had their share of success with transfer quarterbacks over the years. Cam Newton, Nick Marshall and, most recently, Jarrett Stidham all come to mind. But with Stidham headed to the NFL and Clemson transfer Kelly Bryant opting for Missouri over Auburn, the Tigers could be looking at the possibility of a true freshman starting in 2019. Bo Nix, the son of former Auburn quarterback Patrick Nix, is already on campus. His accuracy and athleticism give him a real chance to win the job. He finished with 12,497 yards of total offense during his high school career and accounted for 161 touchdowns, both Alabama high school state records. Rising junior Malik Willis has thrown just 14 passes over the past two seasons, but at least has some game experience at the collegiate level. Joey Gatewood is a 6-foot-5, 237-pound redshirt freshman who needs to develop as a passer, and the player with the most interesting backstory in the race is 24-year-old redshirt freshman Cord Sandberg, who was originally headed to Mississippi State out of high school, but played six seasons of minor league baseball in the Philadelphia Phillies organization.

All eyes are on Ohio State transfer Tate Martell to see if he gets his waiver and is eligible to play right away. If he does, he’s the odds-on favorite to be the Hurricanes’ starting quarterback in 2019. He’s already on campus and will make things interesting this spring either way. With or without Martell, it certainly sounds like redshirt freshman Jarren Williams is ready for all comers. Soon after Martell announced that he was transferring to Miami, Williams tweeted, “Nothing excites me more than competition.” Williams is extremely athletic, but also has a strong arm. Redshirt sophomore N’Kosi Perry split time with departed senior Malik Rosier a year ago, but it was a struggle for the entire Miami offense most of the season. First-year coach Manny Diaz knows how important getting it right at quarterback will be. The Hurricanes have struggled to develop players at that position for the past decade or more. New offensive coordinator Dan Enos will earn his money.

Herm Edwards and the Sun Devils wrapped up their spring in February, and it’s pretty clear that they will go into the fall with a wide-open quarterback race among four different players, including three true freshmen. The holdover from a year ago is redshirt junior Dillon Sterling-Cole, who was the backup to Manny Wilkins in 2018. Sterling-Cole dropped some weight in the offseason and is in great shape, which was apparent in the way he threw the ball and moved around this spring. Arizona State brought in one of the top quarterback classes in the country. The most coveted of the group was Jayden Daniels of San Bernardino, California. He was ranked by ESPN as the No. 2 dual-threat quarterback prospect in the 2019 class. Daniels flashed plenty of potential this spring and might be a little bit ahead at this point of fellow early enrollees Ethan Long of West Linn, Oregon, and Joey Yellen of Mission Viejo, California.

Fifth-year senior Brian Lewerke didn’t have nearly the season many were expecting of him a year ago, and it wasn’t all on him, either. He was plagued by a shoulder injury and finished with eight touchdown passes and 11 interceptions and struggled with his decision-making at times. Michigan State coach Mark Dantonio has hardly given up on Lewerke and has made that abundantly clear, as all Dantonio needs to do is think back to the 2017 season when Lewerke became the first quarterback in school history to throw for more than 2,500 yards and rush for more than 500 yards in a season. Even so, redshirt sophomore Rocky Lombardi could have a chance to make a move this spring. Lombardi filled in for Lewerke when he was injured last season and played in eight games. Whoever’s behind center, the Spartans have to find a way to score more points. They failed to score a touchdown in three of their last four games a year ago and finished 126th nationally in scoring offense (18.7 points per game).

The shadow of Mason Rudolph looms large at Oklahoma State, even though his final season in Stillwater was 2017. He was that good and that valuable to the overall program, but Mike Gundy has found a way to pile up the points and the yards with a variety of different quarterbacks. With Taylor Cornelius gone after stepping in for Rudolph a year ago, the race for the starting job will be an interesting one this spring between two main combatants — redshirt freshman Spencer Sanders and redshirt senior Dru Brown. True freshman Brendan Costello is also on campus and will go through spring, although it’s probably a long shot that he wins the job. Sanders appears to be a perfect fit for Gundy’s system after carving out a legendary high school career in Texas. As a senior, he passed for 3,845 yards and 54 touchdowns and rushed for 1,380 yards and 16 touchdowns. Gundy called him the most complete quarterback he had seen “off of tape.” Brown redshirted last season after transferring from Hawaii and is the only one in the mix who’s played in a college game. He passed for 5,273 yards and 37 touchdowns his last two seasons at Hawaii.

For the third time in four years, TCU will have a new Week 1 starting quarterback. Shawn Robinson transferred to Missouri, but the Horned Frogs have options. True freshman Max Duggan is an early enrollee and was the Iowa Gatorade High School Player of the Year. Redshirt freshman Justin Rogers was a coveted recruit, but he tore up his knee his senior year in high school and had complications in his recovery last year. The good news is that he will be healthy enough to go through spring practice and show off his big arm. Rogers hasn’t played a whole game since 2017 when he was in high school. Michael Collins is also back and started in four games in 2018. He was Robinson’s backup last season, but Collins underwent offseason surgery and will miss the spring. The most experienced of the bunch is Kansas State grad transfer Alex Delton, who was a part-time starter for the Wildcats. Delton is a terrific athlete, strong leader and will get a fresh start under TCU co-offensive coordinator and quarterbacks coach Sonny Cumbie.

With Josh Jackson leaving for Maryland as a grad transfer, the door is open for fifth-year senior Ryan Willis to lock down the job full time. Willis, a transfer from Kansas, took over the starting role after Jackson fractured his leg in the third game a year ago. He passed for 2,716 yards, 24 touchdowns and nine interceptions, but was just 4-6 as the starter. Redshirt freshman Quincy Patterson was a highly rated prospect coming out of high school, and this will be a big spring for him. Redshirt sophomore Hendon Hooker initially put his name into the transfer portal, but has since decided to return to Virginia Tech. Hooker missed about three weeks of offseason conditioning as he was considering his options. The wild card may be Oregon transfer Braxton Burmeister, who won’t be on campus until this summer. He would also need a waiver from the NCAA to avoid having to sit out a year and be eligible to play in 2019.

The intrigue surrounding the Wisconsin starting quarterback job really heated up last week when redshirt senior Alex Hornibrook decided to leave the program. Hornibrook started in 32 games over the past three seasons, but was plagued by concussion issues last season. He plans to graduate in May and play his final season elsewhere. The player Badgers fans can’t wait to see is true freshman Graham Mertz of Overland Park, Kansas. The 6-foot-3, 205-pound Mertz was ranked by ESPN as the No. 1 pocket passer nationally in the 2019 class and stuck with Wisconsin even after the likes of Alabama, Clemson and Ohio State came after him later in the recruiting process. Mertz is on campus and will participate in spring practice. The Badgers’ only returning quarterback with any meaningful experience is junior Jack Coan, who played in five games last season and started in the Pinstripe Bowl. Sophomore Danny Vanden Boom and redshirt freshman Chase Wolf will also take their shots at the job this spring.