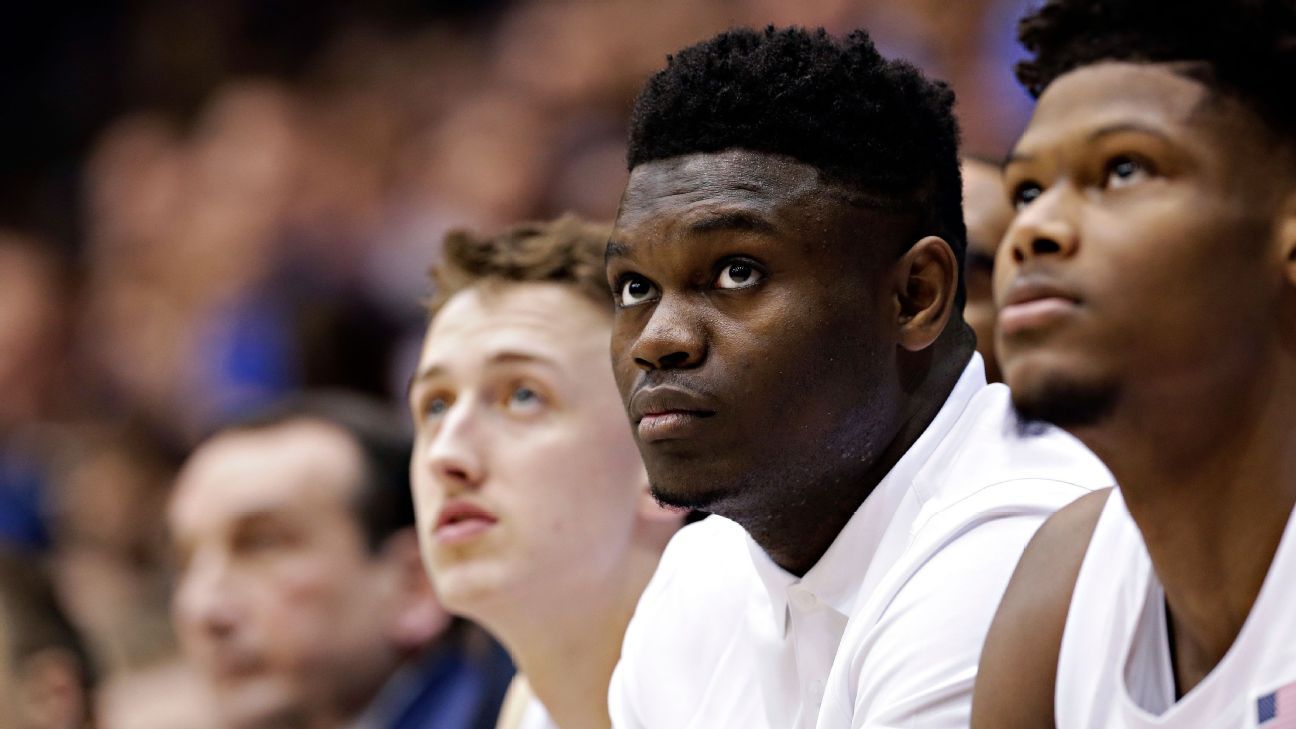 DURHAM, N.C. — Duke coach Mike Krzyzewski remains doubtful star Zion Williamson will be on the court Saturday vs. North Carolina, but he offered his most fervent assurance that the freshman and possible player of the year will return to action soon.

Williamson missed his fourth straight game with a knee injury Tuesday night, and Duke struggled to get past last-place Wake Forest in a 71-70 win that would’ve marked a likely send-off from Cameron Indoor Stadium for the star freshman. The good news, Krzyzewski said, is that Williamson was able to do some basketball work during practice, and his return is imminent.

“He’s getting more confidence, and we just have to get him in shape,” Krzyzewski said. “I don’t think he’ll be ready for [UNC] … but I would be surprised if he wasn’t ready by the ACC tournament.”

Krzyzewski downplayed more specifics, but Tuesday was his most emphatic assurance that Williamson would, in fact, return to the Duke lineup. In the aftermath of the injury — caused by a blown-out sneaker — some wondered if Williamson should sit out the rest of the way to preserve his draft stock. That won’t be the case, Krzyzewski said.

Williamson was hurt seconds into Duke’s first game against North Carolina, a blowout home loss, and the Blue Devils have struggled on both sides of the court at times without him.

Those problems were on full display Tuesday, as Cam Reddish was in early foul trouble, and RJ Barrett essentially served as Duke’s only true scoring threat. At one point, Wake led by as many as 10, and it was only a pair of misses near the basket at the end that allowed Duke to escape with the win.

An all-access series documenting the Blue Devils’ preparation for the 2018-19 season, exclusively on ESPN+. Watch on ESPN+

“We’re not as good as we are with him — that’s the first thing,” Krzyzewski said. “You can’t put together a well-oiled machine here in a couple practices to play in this conference at a level when you lose a kid like that. There is no kid like that. But our guys have fought.”

That was the resonant message from others Tuesday, too. Yes, this team looks much different without Williamson, but they’re looking at this stretch without him as a proving grounds.

“I thought we needed it,” Reddish said. “We needed to take a few losses to keep us humble and working and fighting. Hopefully, he comes back. And if he doesn’t, we’re a team full of fighters.”

They aren’t a team full of scorers, though, and Krzyzewski said he’s enthusiastic about his star’s impending return and its potential impact on the Duke offense.

“He’d love to play Saturday, too, if he’s ready,” Krzyzewski said. “He’ll be in some basketball workouts now. That’s a really good sign for us. For me, it’s a great sign.”

As for the long-term impact of these past few games, Krzyzewski said he wasn’t concerned about Duke’s tournament seeding, noting that the Blue Devils have played Virginia twice and will have done the same with North Carolina by week’s end. And if Williamson isn’t on the court, they’ll have had all four of their star freshmen in action for just half their ACC games.

“Playing with not a full deck has been very difficult,” he said. “We thought it was going to be easier.”