Here’s the story: in the long, long ago, David Benioff and Dan Weiss made a pilot for Game of Thrones, a new HBO fantasy series. Then they showed that pilot for their friends, everyone hated it, and they reshot about 90% of the footage. The actual pilot we got, “Winter Is Coming,” still has a few shots from that first unaired episode — Tyrion’s hair is way blonder than normal in one bit, and Sophie Turner looks younger in one scene than she does in the next — but mostly, it’s all new stuff. The old footage was lost to time.

Or almost lost. Bill Bradley of The Huffington Post found the original unaired pilot script in the  Texas A&M Cushing Memorial Library, where A Song of Ice and Fire author George R.R. Martin has been sending his papers to be archived for years. (Martin had a cameo in the original pilot as a Pentoshi noble, by the way.) Let’s take a look at some of the Game of Thrones moments that never were.

Treasures of Northern Ireland: As we’ve noted in our recent Game of Thrones news roundup, Linda and I were away to Northern Ireland this past weekend on a trip sponsored by Tourism NI to see the Winterfell Festival at the beautiful Castle Ward estate… https://t.co/e8IApADoNx pic.twitter.com/QgVk7J1xbk

1. The White Walkers talked to each other

The first scene of the series is pretty iconic by now. A trio of unfortunate Night’s Watchmen go beyond the Wall, encounter the White Walkers, and are killed very dead. Originally, the plan was for the White Walkers to be able to communicate with each other using an actual spoken language. Read below:

The White Walker language is called Skroth, and Game of Thrones language guru David J. Peterson even went so far as create the basic vocabulary and grammar for it. But in the end, the production opted to cut the language so the White Walkers would come off as more mysterious.

In the first episode of the show, King Robert Baratheon visits the Winterfell crypts and places a feather in the hand of the statue standing over the grave of Lyanna Stark, his lost love. Since then, that damn feather has become one of the low-key breakout stars of the show. It came back in season 5, when Sansa found it on the ground…

…and again in the “Crypts of Winterfell” teaser for season 8, when it falls out of Lyanna’s hand as Jon Snow walks past:

For a throwaway prop, it’s had a long, richly symbolic life, but if the original pilot had made it to air, none of that would have been possible. Here’s what happened to it in the unaired script: 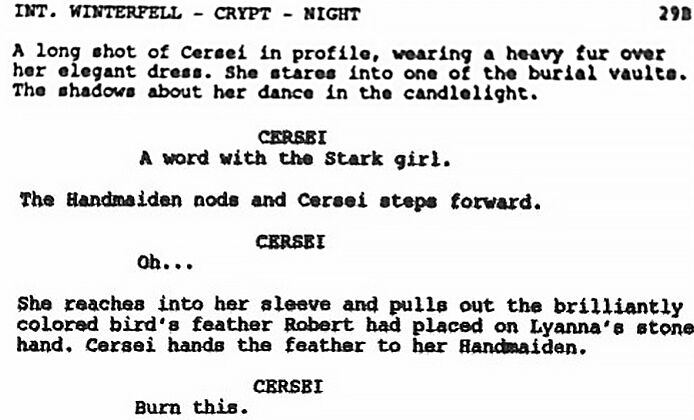 Oh, that Cersei, always burning things she doesn’t like.

This is actually a nice little moment, and would have given us some early insight into Cersei’s resentment over her husband’s refusal to let go of Lyanna Stark. But then the feather would never have found stardom, so I’m glad it was cut.

3. The sex scene between Daenerys and Drogo was consensual Easily one of the most uncomfortable moments of “Winter is Coming” is after Daenerys Targaryen is married off to the warlord Khal Drogo. He takes her to a secluded location and has sex with her while she is clearly upset and uncomfortable.

In Martin’s book, things go differently. There, the first sexual encounter between Daenerys and Drogo is consensual, although still highly unusual given that it’s an arranged marriage and they just met and don’t speak the same language. The original pilot script sticks closer to the books:

The discussion around depictions of sex and sexual violence on Game of Thrones is fairly fraught, although before we move on I’ll note that there is another nonconsensual sex scene between Dany and Drogo in the books, one that the show adapted in Episode 2, “The Kingsroad.” So even if the show had kept the original pilot script, unless it was planning to change future episodes, it would hardly mean the end of the discourse.

4. Jon Snow gets drunk and embarrassed at the Winterfell feast

Here’s another example of the original pilot script hewing closer to the books. This next scene didn’t appear in the episode we got but does happen more or less just like this in George R.R. Martin’s A Game of Thrones: 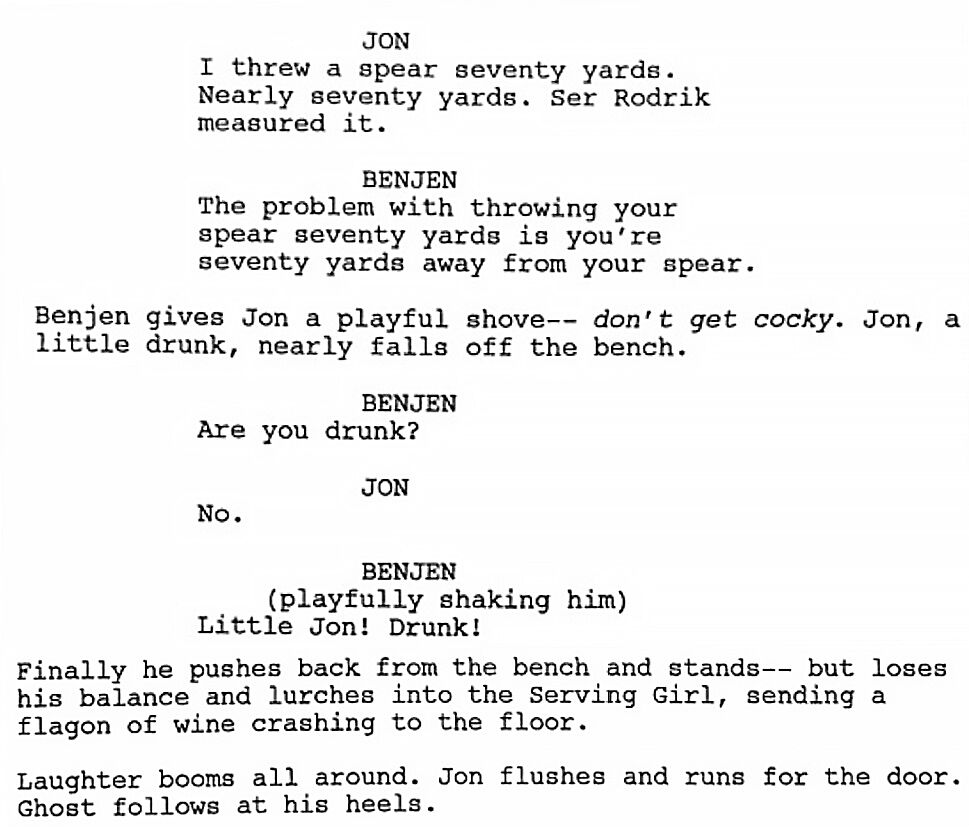 If I had to guess, I’d say they rethought this scene because it doesn’t really work with an actor of Kit Harington’s age playing the role. It’s more believable in the books, when Jon is all of 14 years old when King Robert comes to visit.

In A Game of Thrones, when Robert comes to Winterfell and offers Ned the position of Hand of the King, Ned is initially reluctant to go to King’s Landing. That gets translated to the show accurately enough. The difference is Catelyn. In the books, she encourages Ned to take the job, both because of the political considerations and because she wants Sansa to become queen. “Her sons could rule from the Wall to the mountains of Dorne. What is so wrong with that?”

But in the pilot we got, neither Catelyn nor Ned want him to go south, and most of the arguments Catelyn makes in the book get put in Maester Luwin’s mouth Once again, the original script sticks closer to the book: 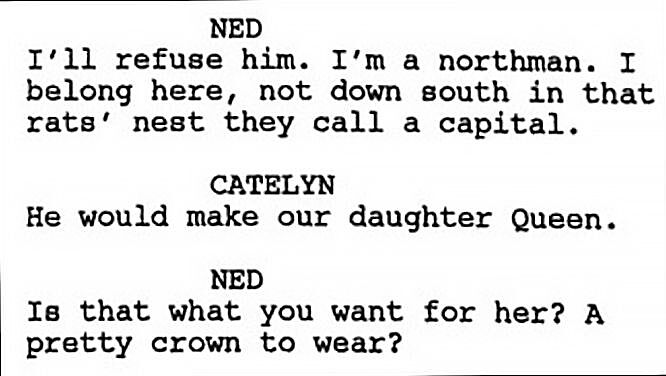 There are more differences, including several scenes that don’t appear in the original pilot script but do appear in “Winter Is Coming.” These include Sansa and Arya practicing stitching, Bran practicing archery in the yard, Sansa begging Catelyn to let her go to King’s Landing and that ridiculous scene where Jon, Robb and Theon are shaving.

And there are deeper mysteries yet unsolved. For example, someone filmed a flashback to the death of Ned’s brother Brandon at the hand of Aerys “the Mad King” Targaryen, but no one’s seen the footage. This shot has been floating around the internet for years, though:

Maybe when season 8 is over HBO will release the original pilot and we can all see for ourselves how different things could have been. Until then, click here for more insights!