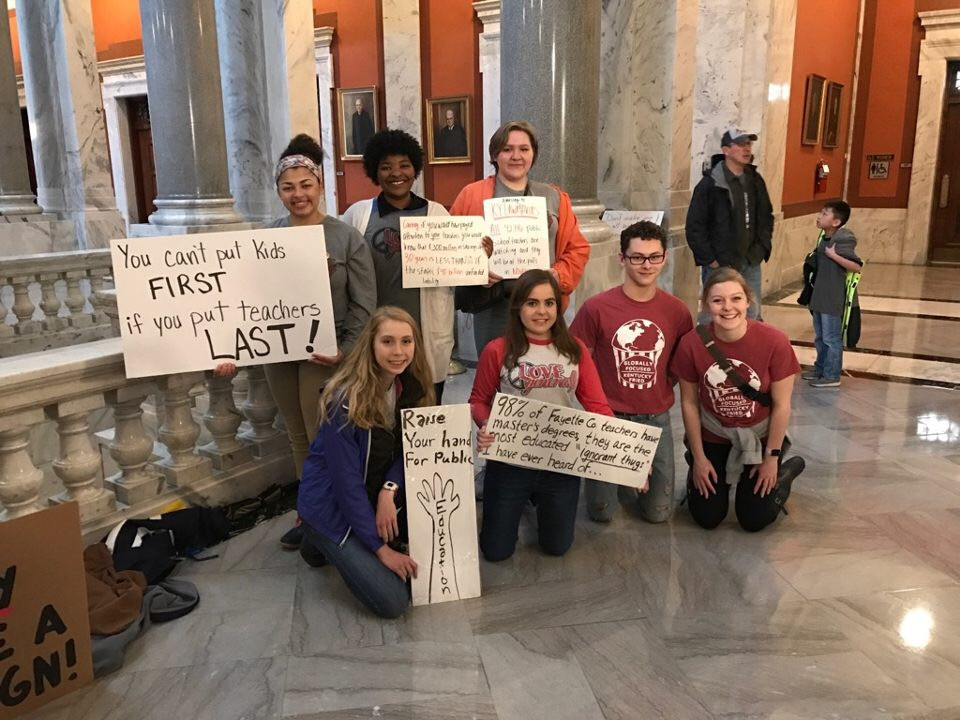 Almost a year ago, when Kentucky teachers rallied at the state capitol in Frankfort to denounce Gov. Matt Bevin’s (R) pension bill and demand increased school funding, Amelia Loeffler, then a 15-year-old high school sophomore, was among students who stood beside them.

“For me, this wasn’t going to just be a day off school,” Loeffler told ThinkProgress, of the protests which led to a victory for Kentucky teachers late last year after the state Supreme Court struck down a law that would have reduced their retirement benefits.

“It seemed wrong for me to get a day out of classes while my teachers, the people to whom I owe so much of who I am and who I will become, were having to advocate for their livelihoods.”

As teacher protests continue — including in Los Angeles, Oakland, West Virginia, Denver, and Ohio this year alone — Loeffler is part of the group that comprises teachers’ most assertive and effective allies, who have been turning up on picket lines, staging walk outs, and speaking up: their students.

In the recent spate of strikes across the country, dating back to the 2016 “sickouts” by Detroit teachers, educators seek to solve fundamental injustices in terms of funding, from low wages, to poor school conditions, to limited educational resources. Most strikes have occurred in Republican states where, as ThinkProgress previously reported, the combination of right-to-work laws, chronic underfunding of education, and sustained tax cuts have brought the fight for education and labor rights to a boiling point.

Amee, a 16-year-old Los Angeles student, took these realities to heart when she participated in the student rally held in conjunction with the Los Angeles teachers strike earlier this year. She joined picket lines outside her school and marched with teachers in Grand Park and downtown L.A. She was also part of a group of students who organized a “block party” that turned into a sit-in at LAUSD headquarters.

“It would make absolutely no sense for a rich, white person with a background in investment banking — who has never stepped foot into public school as a student — to make the decisions for low-income, black and brown youth in the education system,” Amee told ThinkProgress, referring to superintendent Austin Beutner, a former investment banker, who, she says, “has not listened to what the students that go to these schools need.”

LAUSD eventually reached an agreement with union leaders that included a 6 percent salary increase for teachers and greater funding on staffing and class-size reduction, among other wins.

“Every demand teachers have been fighting for affects the students as well. Every student would benefit from class sizes that aren’t distracting and promote a healthy learning environment. I would benefit from not having to worry about my education being turned into a business for the privatizers and charter schools that want to take over,” she added.

Megan Simmons, a 19-year-old college student who heads strategy for Student Voice, a by-students, for-students nonprofit, was in Los Angeles for Student Voice’s national tour when the teacher strikes were taking place.

“No one is fixing the root problem of education, and so much of that comes back to funding,” Simmons told ThinkProgress.

Simmons believes that, in addition to higher wages for teachers, greater emphasis should be placed on funding public education. She notes some states opt to fund certain school districts over others, or direct funding toward vouchers for private and charter schools, but, “at the end of the day, we’re not investing in public education as we should be.” (Student Voice created a guide for students who plan to testify in front of their local school board to ensure student perspectives are heard in the decision-making process.)

Students, like those in Denver who walked out of their classrooms in solidarity with their striking teachers last month, feel the strain of limited funding firsthand, arguing that it keeps them from receiving a quality education.

Joe McComb, a high school senior, who, as a student journalist, reported from inside Thomas Jefferson High School during the Denver strikes said, “There are many excellent people that are currently teachers and might also become teachers, but the unfair pay has led or kept out qualified and capable educators out of the classroom due to unfair pay.”

Student protests in Denver made national headlines, but for many students and young people, like Simmons, it wasn’t surprising. She cites the “hustle culture” shared by both students and teachers that has motivated the two groups to find common ground in seeking justice through advocacy.

“We’re constantly having to find other ways to supplement our own incomes, and that’s starting to impact people at a younger and younger age,” she explained, noting that she works several jobs and has heard of multiple instances of teachers moonlighting as waiters to make ends meet.

Gabrielle Davis, 19, believes students’ support of teachers spans the personal and the political.

“Public education was such an influential aspect of my life, something I’ve realized especially since being at a private college,” she said. “Public education taught me how to work hard, respect others, and love learning.” Davis added that her teachers had an impact on her as an individual, noting that “they become mentors, advisers, friends, and biggest cheerleaders.”

During the Oklahoma teacher walkouts, Davis, then a high school senior, organized a student-led, student-focused rally, which hosted 12 student speakers from across the state. Students discussed inoperable bathrooms, outdated textbooks, and teachers being forced to work side jobs or leaving the state altogether. In Davis’s own high school, there were classes of 45 students and history books that ended at the September 11, 2001 terrorist attacks.

“Students called their legislators, their school board members, and superintendents, and really engaged in the social media sphere to draw attention to the plight of their teachers and their education,” said Davis. Although they won a pay increase of around $6,000 last year, Oklahoma teachers didn’t secure wins for restoration of education funding after nine days of striking.

Ari Papahronis, also of Oklahoma, said he had friends on the front lines of the walkouts, while he championed them from college in New York, writing an op-ed defending his public school education.

“Students have the ability to make a change and more importantly are a part of the change,” he told ThinkProgress, adding that he believes state legislatures need to reorient their relationship to education. “The fact that our government believes public education is expendable, as if it was a luxury to be cut shows that there is something fundamentally wrong.”

Meanwhile, some students who protested in 2018 are witnessing the frustration of what hasn’t changed within a year. Nineteen-year-old Jakob Spruce was among a group of West Virginia students who organized #SecureOurFuture, a student-led movement in solidarity with their teachers. What began as a six-student project became 20 schools banding together for a “purple out” to show their support (purple represented the blue and red colors of teachers unions in West Virginia, Spruce noted).

“It is crazy that teachers’ pay hasn’t gone up in years, but insurance premiums have kept rising,” Spruce tells ThinkProgress. “Our teachers are amongst the lowest paid in the country. For an occupation that affects every person in the state, teachers seem to be ignored by the people in power.”

West Virginia teachers held a second protest this month to ensure lawmakers wouldn’t tether teachers’ raises to funding charter schools — that strike was successful, leading lawmakers to table the bill that would have done exactly that.

Loeffler, for her part, is eager to see more advocacy for teachers than ever, as strikes continue in states across the country.