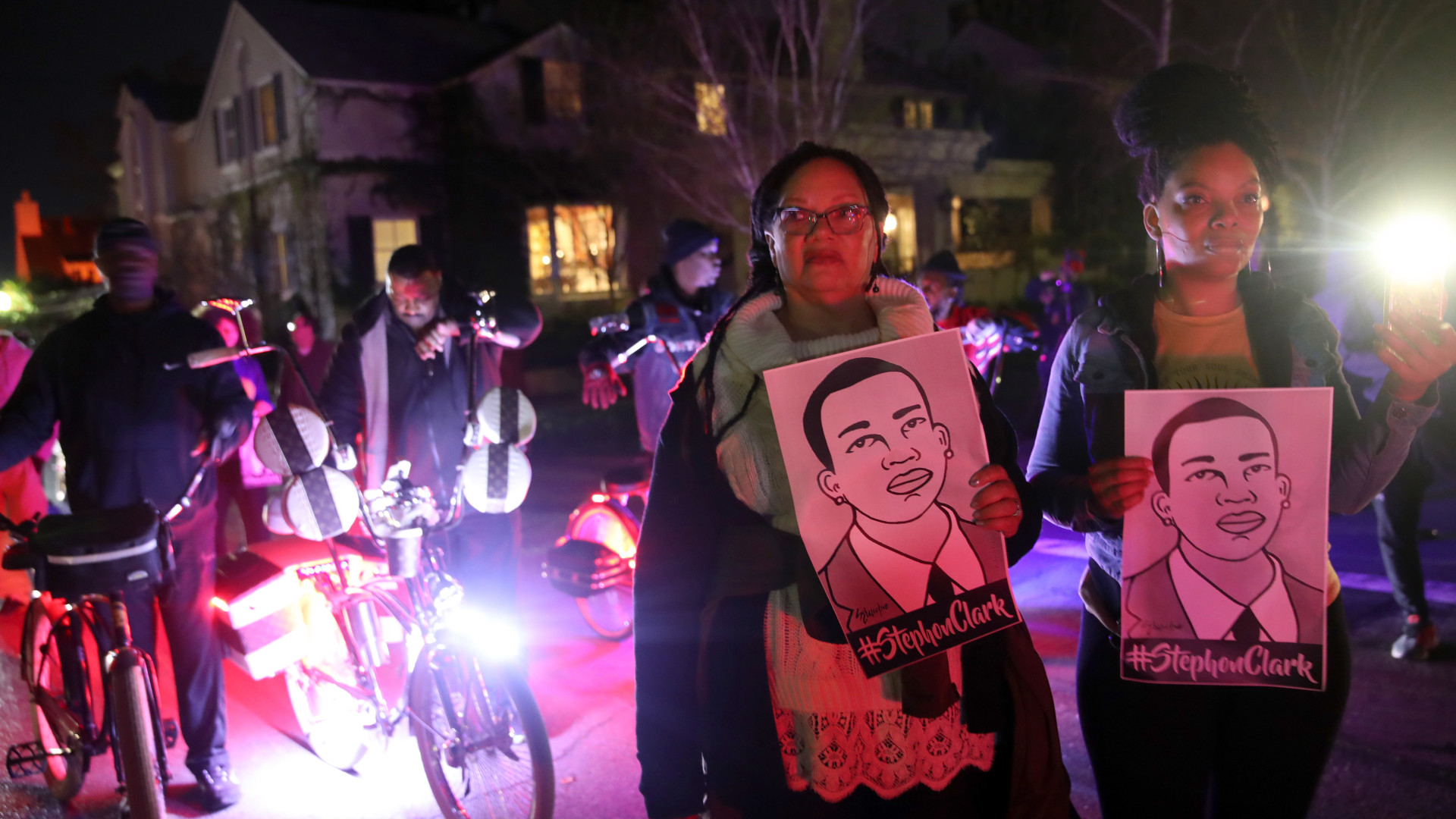 Sacramento police arrested more than 80 people Monday night, damaging the delicate positive relationships that community organizers and civic leaders have built in the year since Stephon Clark was killed.

Local activists had switched up their tactics for the newest protests, planned in response to the local prosecutor’s Saturday announcement that Clark’s killers would not be charged. Though local activists had expected that legal conclusion, the surprise decision to release personal details about an unarmed black man gunned down by police sparked outcry and left the city on edge.

Instead of seeking to shut down the Golden One Center where the Sacramento Kings were playing a home game as they did a year ago, or forcing the local mall to close for business as they had for 24 hours over the weekend, organizers planned a walk through a wealthy, predominantly white neighborhood locally known as the “Fab 40s.”

In action after action last year, local organizer Berry Accius told ThinkProgress, police managed tense situations without making any arrests. But as his colleagues were getting ready to disband after sundown Monday, he said police blocked the group from returning to their cars.

“They made their minds up and said, we are going to try to impact the protest by arresting them. But what they did was they sacrificed their integrity,” Accius said Tuesday morning. “They showed what we were saying to the world, that Sacramento has issues and we’re no better than any place like Ferguson.”

The police department said that a handful of cars along the Folsom Boulevard march route had been vandalized.

Accius said it never happened, noting that he and other local activist leaders go out of their way to warn newcomers that these marches are not the place to vent the type of violent frustration that sometimes erupts in such circumstances. The police department did not immediately respond to a ThinkProgress request for evidence supporting its assertions of vandalism. Mayor Darrell Steinberg tweeted that he has “many questions about what caused the order to disperse and the subsequent arrests” but would withhold further comment until police had answered him privately.

Roughly 100 people had gathered in the city’s well-to-do downtown at about 7:00 p.m., according to the Sacramento Bee. Things first threatened to go sideways when a man named Dan Iverson from another nearby neighborhood showed up in a red MAGA hat. He wanted “to see what would happen,” he told the Sacramento Bee. Some marchers chanted Clark’s name at the man, and one grabbed the hat off of his head. That physical contact prompted attending police officers to intercede for the first time, according to the Bee’s report, but no one was arrested at the point.

About an hour later, after police had blocked protesters from entering the lobby of Mercy Hospital, the group returned eastward along Folsom toward the pharmacy parking lot where many of them had left their cars.

But as they reached that block of Folsom, police refused to let them move to the north side of the street where they’d parked. They made six arrests at that point, and began to order the crowd to disperse — even as, according to Accius, organizers explained they were trying to disperse if the officers would just let them get back to their cars.

“We were done,” Accius said. “I talked to one of the organizers like, ‘Y’all good?’ She was like, ‘Yeah we’re about to leave.’”

Instead, a block of officers used batons to herd the protesters away from where they’d parked, south along 51st street to where it overpasses the highway that had been a nexus of the original Clark protests. One photojournalist was reportedly knocked to the ground by officers at that point. Police reportedly threatened to deploy pepper spray.

Protesters were annoyed but figured they would just have to take the long way back around to their cars, Accius said. But then they hit the overpass and discovered that the far side was completely blocked by another contingent of police. The officers had funneled the group into a “kettle,” a controversial crowd control tactic whereby police physically entrap a large group so they can arrest everyone one by one.

By the time the police were finished, they’d handcuffed or zip-tied at least 85 people, including at least two journalists and three clergy members who’d helped organize the march.

Accius acknowledged the vandalism charge is hard to prove or disprove in the immediate wake of the mass arrests, and that street protests sometimes attract angry outsiders eager for an excuse to break stuff. But local leaders try to counteract that energy when they see people they don’t know in their ranks.

“They’re checked off top. They’re told, right, here’s what’s gonna happen,” he said. “There was a moment where some white guy came out with a MAGA hat, provoking the folks marching. That for sure happened. But we were able to [calm things] as peacekeepers, me, Ryan [McClinton], some of the other organizers.”

The jarring end of the protests threatens to inflame the local tensions surrounding the killing of 23-year-old Clark.

“But as soon as you walk through the Fab 40s and you make some rich white people more uncomfortable than they’re supposed to be? When we inconvenience their children because we are fighting for Stephon Clark’s children who no longer have a father? All hell breaks loose.”

A few local residents came outside to show support for the protesters too, according to Accius, some joining the march and others raising fists in solidarity. Despite the ugly moment with Iverson and his MAGA hat, the marchers felt they were on track to deliver another loud but peaceful protest in the year-long campaign to get Sacramento’s privileged and powerful to wrestle with the structural racism underlying Clark’s death.

“I thought we hit a home run, I thought we were out. It was like, OK, cool, I can kind of get some rest and wait for the next moment we’re going to have,” Accius said. “And now we have more questions, because of what just transpired.”

City leaders have spent a year making public and private signals that “we’re all in this together,” he said.

“But no, we’re not. We never have been. Because when you guys get pissed off enough, the hammer comes down.”